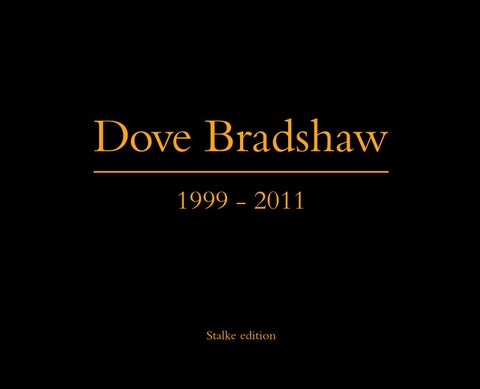 A Measure and the Immeasurable David Frankel

Dove Bradshaw has an abiding attraction to contradiction. She has consistently made works that counterpose opposites in such a way as to make them point somewhere else. Bradshaw describes herself as “not a photographer engaged with the mechanics of the camera or the darkroom” though it is a rare artist who would find himself making Daguerreotypes, or figuring ways to transfer the qualities of those images into photogravures, large format film, or inkjet prints. Most of the images are black and white, though it is more fitting to say they’re black, with a matte richness that Bradshaw repeatedly looks for and finds in that tone. The impression is of a dense black field with areas of white, at times delicate and skeletal defining an object or figure. This overall somberness suits a recurring theme: the vanitas or memento mori—in life there is death and vice versa. Watermusic II (2005)

presents a skull and an egg, as distorted as the anamorphic skull in Holbein’s Ambassadors (1533), though made by the modern expedient of moving a Daguerreotype over the glass of a photocopier. Skulls reappear in You Skull See (2004), here doubled in a mirror that reflects the artist holding a skull, and in And so. And All. and They Were and Went (both 2004) which more simply make visual rhymes of skull and egg—an end and a beginning. Spent Bullets (1979/2001), a photogravure for which the artist placed a silver bullet she shot and retrieved, an intact bullet and casts as jewelry of a fired bullet, is an equally compressed statement with a similar rhythm. Bradshaw’s work often has a scientific bent that she turns to aesthetic purposes, ending in places no scientist would. A series from 2002-4 combines the human body with a list of its material elements written directly on the skin of a man and a woman. Alternately

the woman is posed under a transparent veil imprinted with the names of the elements. Oxygen, the body’s largest component, comes at the top in proportionately large type, followed by carbon, hydrogen, nitrogen, and the rest, the letters dwindling with each element’s share. By a sleight of the mind, this simple fusion allows us to see the body elegantly intact and at the same time broken down, decomposed into its constituents. On one level restatements of the vanitas motif, they transfer that theme into a more objective, rational realm, while losing none of its mystery. A paradoxical kind of science is most evident in 2√0 (1971/2008), a work resembling a sand clock that could double as an invention. “I had the simple idea of substituting water for sand in a timer,” Bradshaw recalls, but the idea proved difficult to realize and interestingly the use of a liquid offered the possibility of engaging spatial dimension—a

level. A sand clock consists of a pair of glass globes joined by a narrow neck through which sand flows effortlessly, the transfer always taking the same amount of time. Water tends to seal this neck, demanding an additional valve between the globes to equalize the pressure. Bradshaw experimented with the use of acetone and finally with the creation of a vacuum. When vertical a stabilizing armature would have been necessary to make it a reliable timer; when horizontal, markings for use as a level. Neither was provided. Though an instrument without a purpose, its shape, like an eight laid sideways, makes it a material infinity sign. As such, an instrument of measure that points to the immeasurable, it is emblematic of Bradshaw’s work.

Spent Bullets, 1999 In 1979 a .38 caliber lead slug was cast in silver, crimped into a cartridge, then shot and retrieved by the artist at a New York City Police Department firing range. As a political statement another “spent” lead bullet was cast in silver and made into a pair of earrings.They were photographed along with an intact NYPD bullet in 1999 with 2¼ x 2¼ inch film.This photogravure edition of 30 is signed, dated, and titled on recto, 18¾ x 13 inches. Number 1 of the edition is in the permanent collection of The Metropolitan Museum of Art, New York.

Without title, 2000 The artist is known for her chemical paintings and outdoor sculptures of stone, minerals, and metal that change in weather. Here acid was thrown onto a copper plate, then printed.This acquatint edition of 26 is signed and dated 2000 on recto, the first: 19Â˝ x 15 inches; the second and third: 19 x 12Âž inches.

(A)claimed Object, 2005 In 1979 the artist ‘claimed’ a hygrothermograph in the Kunstmuseum Dusseldorf (the second of three such objects ‘claimed’ in museums). Her focus on this meteorological instrument was a harbinger of her paintings whose chemically treated surfaces cause them to change with the atmosphere.The image was shot in 1979 with 35mm film.This photogravure edition of 36 is signed, dated 2005, and titled on recto, 15½ x 10¾ inches.

Herself in the Element, 2005 The body elements are painted on a woman’s back in descending proportion by weight. Oxygen, represented as it appears on the periodic table by the letter O, circles her neck.The dwindling letter sizes reflect each element’s share.The title comes from Finnegans Wake. Artist Evelina Domnitch, the model, was photographed with 4 x 5 film in 2002.This photogravure edition of 36 is signed, dated 2005, and titled on recto, 28 x 21½ inches. An inkjet edition of this image is in BRADSHAW, the Limited Edition Box in the permanent public collections of The Metropolitan Museum of Art, New York, the Whitney Museum of American Art, New York,The New York Public Library,The Art Institute of Chicago, the San Francisco Art Museum, The Museum of Contemporary Art, Los Angeles,The National Gallery,Washington, DC, Birmingham Museum of Art, Birmingham, Alabama,The Russian State Museum, Marble Palace, Saint Petersburg, and the Shu Uemura Estate,Tokyo.

КИСЛОРОД, 2005 Dimitry Gelfand, the model, is a Russian artist who collaborates with and is married to Evelina Domnitch. КИСЛОРОД is Russian for ‘oxygen’ and is represented by its first letter placed sideways. Similarly, the type was painted directly onto his body with the elements following in descending proportion by weight. Opposites were sought in the pairing of both images: male/female, husband/wife, Russian/English, East/West, front/back, image/text. Gelfand was photographed with 4 x 5 film in 2004. This photogravure edition of 36 is signed, dated 2005, and titled on recto, 28 x 21½ inches.

Counterfeit Bill, 2005 William Anastasi, the artist’s life-partner since 1974, supplants Benjamin Franklin on a one hundreddollar bill. Anastasi’s image was derived from a 4 x 5 daguerreotype self-portrait taken in 2002.The title of this work comes from an off-hand self-deprecating remark by Anastasi.This photogravure edition of 36 is signed, dated 2005, and titled on recto, 15½ x 10¾ inches.

Plain Air, 2005 The artist photographed a pair of flight pigeons mating on a target in her 1991 installation of Plain Air at PS 1 Contemporary Art Center, New York.The installation recreates the 1969 original in which two mourning doves were released in the artistâ&#x20AC;&#x2122;s studio with a suspended 27 inch bicycle wheel. Respecting the larger museum space the components were doubled in scale and number â&#x20AC;&#x201D; the pigeons increased to two pairs, the bicycle wheels doubled becoming 48 inches in diameter, along with two targets and two nests.The title is a pun. Photo-gravure edition of 36, is signed, dated 2005, and titled on face, 17 7/8 x 21 inches.

you skull see, 2008 This self-portrait holding a skull to a mirror derives its title from Finnegans Wake. It was photographed with 4 x 5 film in 2004.The photogravure edition of 36 is split: one printed blue, the other black, signed, dated 2004/2008, and titled on recto, 28 x 21Â˝ inches. An inkjet version is in the permanent collection of the Whitney Museum of American Art, New York.

2√0 [horizontal], 2005 In 1971 Bradshaw created this glass and acetone sculpture (2½ x 6 x 2½ inches) at the Massachusetts Institute of Technology.When vertical it is an unpredictable timepiece, when horizontal an unmarked level. She has referred to its variable nature as Pataphysical. Alfred Jarry’s Pataphysics is the science of the particular or of laws that govern exceptions.The title is a nonsense mathematical formula. In 2004 a 4 x 5 Daguerreotype was made, then scanned and used to make this photogravure.The photogravure edition of 36 is signed, dated 2005, and titled on recto, 17 7/8 x 21 inches. One of the edition is in the permanent collection of the British Museum, London.

They Were and Went, 2008 In 2004 a 4 x 5 daguerreotype of a skull and a broken goose eggshell was taken and later scanned to make this print. Its title came from Finnegans Wake. This photogravure edition of 36 is signed, dated 2008, and titled on recto, 17 7/8 x 21 inches. Later the two halves of the eggshell were cast into gold and the work was titled Nothing. One of the edition is in the permanent collection of the British Museum, London.

Song of Which [Evelina Looking Left], 2011 The body elements are printed on voile in descending order by weight with the letter ‘O’ representing oxygen.The model again is Evelina Domnitch photographed with 2¼ x 2¼ inch film in 2004. This photogravure edition of 36 is signed, dated 2011, and titled on recto, 21½ x 18¼ inches. An inkjet version is in the permanent collection of the Chemical Heritage Foundation, Philadelphia, Pennsylvania.

I Am Myself Heaven and Hell, 2011 A honey locust thorn was balanced on the back of the model Kerry Kozokas allowing it to fall down her spine.The image was shot with 4 x 5 film in 2008 and made into a silver gelatin print with the assistance of Paul Taylor, Renaissance Press, New Hampshire. Renaissance Press first published a black and white edition of 36 with the image rotated horizontally.This photogravure edition of 36 is split: one printed blue, the other black, signed, dated 2011, and titled on recto, 21Â˝ x 18Âź inches.

Performance Burned, 2011 In 1978 the fire hose at the Northwest corner of the Great Hall Balcony,The Metropolitan Museum of Art, New York, was photographed with 35mm film, then made into a silver gelatin print.This photogravure edition of 36 is signed, dated 1976/2011 and titled on recto, 21½ x 18¼ inches. In 1976 Bradshaw affixed a label next to a standard fire hose at The Metropolitan Museum of Art in New York identifying it as her work. She dubbed it a ‘claimed’ object in recognition of its à priori presence, distinguishing it from an objet trouvé. On regular visits to the museum whenever the label had been removed, she would replace it.Two years later finding it still there, she printed an edition of postcards, slipping fifty at a time into the museum’s twentieth-century postcard racks. Knowing the card was not theirs, nonetheless it sold for years.The silver gelatin print aquired by the Department of Photography in 1980 became an official postcard in 1992. Eleven years later Bradshaw retitled the work Performance to account for all this activity, including the acquisition committee’s meetings, and, perhaps, even a fire should there be one. In 2007 the fire hose itself was accepted into the museum’s permanent collection as a work of art. In 2012 Roselind Jacobs, the donor and a Dadaist collector, received a letter from the chairman of 19th-Century, Modern and Contemporary Art stating that the museum was now working on an official label with this caveat: “I do feel bound to acknowledge that although Ms. Bradshaw claimed the fire hose, we are not obliged to exhibit her work continously.”The artist believes the circle will be completed by the mounting of a permanent label.This history offers Bradshaw’s guerilla alternative to traditional ownership. In a published conversation with art historian,Thomas McEvilley, John Cage noted, “Marcel Duchamp said, speaking of Utopia, that we won’t be able to reach it till we give up the notion of possession. And this work of Dove’s confronts possession completely.” For the 2011 photogravure edition, she burned a hole in each print.

DOVE BRADSHAW 1999 - 2011 Stalke edition 2012, ISBN: 87-90538-36-6 Thanks to: Sam Jedig for his invitation to create prints and for his steady support Sam Jedig for print photographs; Grazia Ippolito for her portrait Niels Borch Jensen for his devotion to quality David Frankel for his insight in the text Robert Gordon for editing the text Kristian Jakobsen for his design Print: PRinfoTrekroner