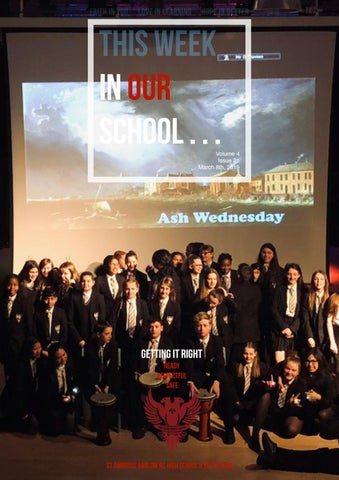 getting it right ready respectful safe

the Young Shakespeare Company, were dazzled It isperformances about this time I meet with by pupils’ at of theyear Ashthat Wednesday each Head of Department to review the liturgies and finished the week with the fun of summer’s exam results. This involves World Book Day and International Women’s Day. plenty of useful and where thought-provoking This is one of those weeks the sheer discussion, but it is usually breadth and depth of the activities talking and about numbers and letters. Behind this data are experiences in school reinforce the view that the stories: how pupils did, how they felt, what curriculum is so much more than just a collection they liked and what they achieved. We of subjects and qualifications.

always focus on how things can be improved as well as celebrating what went This week we also launched the second well. As a Catholic school, exam results are dimension of The Ambrose Way, Everybody just one way of expressing the unique, GodMatters, with a focus on gratitude. Pupils and given talents and skills of each pupil. It is staﬀ will continue to explore this early next week, important to look beyond the data so I am but if ever there was a week to be grateful for the delighted that much more of my job involves blessings and richness of our school it was this being in classes, walking around the school one.

and talking to pupils, students and staff. Like tens of thousands of pupils across the land If ever you are feeling at all despondent or our Year 10 and 11 pupils study Macbeth for fatigued I reckon a quick tour of the school GCSE. I remember doing the same, then would quickly raise your spirits. Let me revisiting it both at A level and university. It is an show you what I mean. Today (Thursday, incredible playmaker rich in historical nuances, September 29th) for instance, I dropped into revelling in heightened language but also rooted Year 10 GCSE Music. There, I was in the base nature of humans: their foibles, delighted to listen to performances of ambitions and imperfections. The Young Beethoven’s Ninth Symphony, Hold Back Shakespeare Company led workshops and the River and When the Saints Go Marching performances thatgot explored theDaniel themes, In. I also to sit with andinvolved Chester the pupils and engaged them as an audience. It as they demonstrated their prodigious DJing was wonderful to see Shakespeare brought to life talents. Next, during lunch, I supervised the in such canteen a way. and made a point of watching the

interactions that take place daily. Pupils and We alsostaff celebrated pupils weekanother, as those holding with doors openthis for one who hadoffering completed their Bronze and Silver Duke thanks, little moments of personal of Edinburgh awards were presented with appreciation and gratitude. Of course, certificates along side the Year 7 and pupils but it things don’t always go well in a9 school, who achieved their John Muir Discovery awards.

is lovely to witness a voluntary apology from a Year 9 to one of the lunch time staff, or These achievements, hard-won in the see one pupil help another whogreat is unsure outdoors, are mirrored by the ‘enviro-Lent’ work where to go for class. undertaken in RE and form time in response to Bishop In John’s published SixthLenten Form, Iexhortation, enjoyed a lengthy chatlast with week. Pupils have written environmental Aidan who explained both the theory of pledges,differentiation demonstrating commitment to the anda its potential commercial care forapplication. our commonInhome.

English they were studying

the play Blood Brothers and talking with Similar activism wasexcitement seen in theabout work superstitions; pupils did humour and exploring International Women’s Day, with a new in Year 7 RE they were dissecting our particular focus on stopping violence and abuse mission statement and exploring the around personal the world.meanings Our mission statement finishes within it. School is a with thebusy, aim of forming young people as bustling, humming place.

Changemakers, and these two examples I get to Maths find all of Year underscore our to endeavours.

9 embroiled in a task that is so challenging and exciting that I want to pupils stay and go myself. Thursday saw andhave staﬀajoin in with World Outside it’s: “Sir, have you seen my tie? Book Day. Our Reading Ambassadors Can you open my bottle? What youand staﬀ distributed the tokens during formdid time think of last night’s game? What time is it,by form various departments joined in the fun Sir?” and, at least once a day, “Oh my dressing a well-known book characters. The days!” department It can be noisy at times and in aapproach English co-ordinated their community this size we can’t expect by coming to school as characters from The everyone to get with taking each other all the by Great Gatsby withon some this further time. But it is our community, and a lively, attempting the Charleston at the end of lessons.

lovely, positive one at that. the single of my ifPerhaps ever there washighlight a week to week, be if I had to pick, would be the conversation I had grateful forwho theis blessings with Mrs. Fay leading the and development of our new library. I am a richness of ourand school it was library enthusiast have been everthis since I was little. The furthest reach of my one. memory is back to moments spent in our

local library entranced by its colour and Undoubtedly the highlight of the week was the bright possibilities. On Twitter start of Lent. Ash Wednesday liturgies can be #RememberingMyLibrary reveals the hold diﬃcult to do and hard for young people to that such an institution has: ‘A library card access, so the fact that all pupils participated was a free pass to wonderment, words and so well that services wereobserves led by large theand ability tothe roam the world’ one groups of pupils is testament to way in which user, whilst another quotes the the wrought iron faith in our school comes to life.

gates of Stalybridge library, ‘Read, Mark, Learn and Inwardly Digest.’ Others talk of Mr. (HoD Mrs.represented Tulloch (HoDorDrama) theDavies escape thatRE), a library of and Miss Jackson (HoD Music) had collaborated the refuge it offered from an unkind world. to create profound services of great depth and faith. beganlast with a mediation on a work of Mrs. They Fay spent Saturday peacefully art (The Great Gale at Great Yarmouth, Ash stacking the shelves and we are inching Wednesday), went on to showcase African closer to opening. What thrilled me was her drumming harmony in Abide With Me comment and that vocal several boys, some of whom and then explored our commitment to one affect a dislike of reading, were electrified by another in aofperformance of Rihanna’s Umbrella.

presence a library in their school: ‘You mean I can borrow this and, like, read it, The Yearwas 9 drama pupils presented a simple, Miss?’ the breathless utterance of one beautiful and powerful piece asking us to rethink pupil. Our library is at the heart of the traditional fasting, suggesting school: a ideas spaceoffor being open to andinstead that we fast from being judgmental feast on sharing ideas and experiences. It and is openwarmth, kindness and love. Now that is plan and its shelves serve as a remindermy kind ofthat Lent.

should be no barrier to anyone there using its volumes or seeking knowledge, Thank you to everyone who made last week solace, entertainment or information. I can’tso special, it is hard to do justice to it here. wait to see it come to life in the weeks

ahead thanks to Mrs. Fay and her band of God bless, helpers.

attendance We aim for 100% attendance for all of our students and have set 96% as satisfactory attendance for this year. Attendance is monitored period-by-period and statistics are published each week. Excellent attendance guarantees excellent learning. Attendance by year (w/b February 25th)

Top: at the Siemens Rollercoaster Challenge; Below: 6th formers at the Teenage Cancer3 Trust fundraiser

Below: The team at Digital Divas

Top: at the Siemens Rollercoaster Challenge; Below: 6th formers at the Teenage Cancer4 Trust fundraiser

Top: The Young Shakespeare Company brings the bard to life. Below: Some of the Year 7 John Muir Award Winners.

Top: at the Siemens Rollercoaster Challenge; Below: 6th formers at the Teenage Cancer5 Trust fundraiser

Top: celebrating International Women’s Day with activism Below: The team behind the amazing Ash Wednesday liturgies.

Top: at the Siemens 6

A selection of staff in their World Book Day 2019 costumes. Can you guess who they are?

Top: at the Siemens Rollercoaster Challenge; Below: 6th formers at the Teenage Cancer7 Trust fundraiser

Visiting Manchester Art Gallery as part of an art trip

Top: at the Siemens Rollercoaster Challenge; Below: 6th formers at the Teenage Cancer8 Trust fundraiser