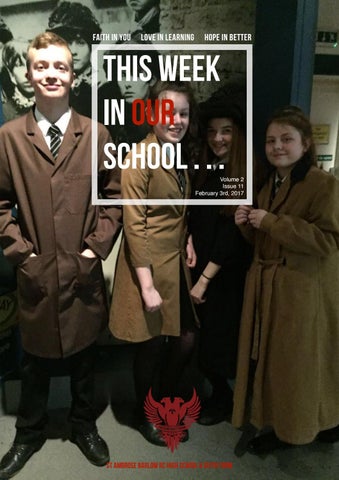 Mr. Davis, Headteacher, reflects on the Mr. Davis, Headteacher, reflects on the week. week. Holocaust Memorial usIwith It is about this Day time confronts of year that meeta with very simple statement: Never Again. I can’t each Head of Department to review the imagine that many, if any of us,This wishinvolves for the summer’s exam results. terribleplenty events of the mid-20th century to be of useful and thought-provoking repeated. But gaining understanding of the discussion, but itan is usually talking about Holocaust is another matter.Behind It is already over numbers and letters. this data are stories: howMost pupils how they felt, what 70 years distant. ofdid, those who survived theyorliked and what they achieved. We are dead too infirm to communicate. always focus on how things can be improved well as what We have to turnas instead to celebrating their children andwent well. As a Catholic school, exam results are grandchildren. And that is what we did when we just one way of expressing the unique, Godmarked Holocaust Memorial Day last week. Our given talents and skills of each pupil. It is service, led by pupils and organised by Miss important to look beyond the data so I am Singleton, was beautiful: simple and powerful. delighted that much more of my job involves What followed had a power all of its own. being in classes, walking around the school

and talking to pupils, students and staff. We listened for nearly an hour as Judith Hayman, Executive ofall thedespondent Jewish If ever you areMember feeling at or Representative Greater fatigued I Council reckon aofquick tourManchester, of the school relatedwould the story of her family. She talked quickly raise your spirits. Let of methe show you what I mean. Today (Thursday, way in which the Holocaust began, of those her 29th) for instance, dropped into family September lost, of the terrifying impact of Ievents that Year 10 GCSE Music. There, I was were beyond their control. delighted to listen to performances of Beethoven’s Ninth Symphony, Hold Back She showed pictures of concentration camps, the River and When the Saints Go Marching explained in straightforward ways the slow buildIn. I also got to sit with Daniel and Chester up of hatred and evil that culminated in the Final as they demonstrated their prodigious DJing Solution. Our pupils and students and talents. Next, during lunch, Isat supervised the listened in absolute silence, drawn by her the canteen and made a point of in watching cheerful, animatedthat delivery. Sitting in silence interactions take place daily. Pupilsisand not at staff all unusual at such an event. What was holding doors open for one another, delightful and exciting was the response. Our offering thanks, little moments of personal pupils appreciation listened deeply then deluged our andand gratitude. Of course, don’t go well in a school, guest things speaker withalways questions, desperate to but it lovely to to witness voluntary apology grasp is the detail, get to athe truth of what theyfrom a YearJudith 9 to one the lunch time had heard. alsooftalked about thestaff, or see of one pupil help another whomany is unsure presence anti-Semitism today and where to go for class. young people in audience responded with a single word: ‘Why?’ How could it be that this In Sixth Form, I enjoyed a lengthy chat with Aidan who explained both the theory of differentiation and its potential commercial application. In English they were studying the play Blood Brothers and talking with humour and excitement about superstitions; in Year 7 RE they were dissecting our new mission statement and exploring the personal meanings within it. School is a busy, bustling, humming place.

I get to Maths to find all of Year 9 embroiled could persist, it occur in and the first place, in a task thathow is sodid challenging exciting what was the motivation for it? that I want to stay and have a go myself. Outside it’s: “Sir, have you seen my tie? Early her talk sentence Can on youinopen my Judith bottle?delivered What dida you that resonated: ‘If wegame? do not accept the is it, think of last night’s What time differences us, then we“Oh cannot Sir?” and, between at least once a day, my call days!” It can be noisy at times and in a ourselves a society.’ community this size we can’t expect everyone to get on with other allreally the you As any young person will each tell you (and time. But it is our community, and a lively, should remember this from your own childhood) lovely, positive one at that.to do without having growing up is hard enough to focus on other people’s differences to you. Perhaps the single highlight of my week, if I Yet it is part of growing that we learn to had to pick, would be the conversation I had recognise with Mrs.and Faythen who to is appreciate leading thedifferences they educate us, enrich uslibrary. and offer us aan development of our new I am alternative way to see the world. At school, library enthusiast and have been ever since sometimes cause problems as I was little.these The differences furthest reach of my young people struggle to accept and in understand memory is back to moments spent our one another. local library entranced by its colour and bright possibilities. On Twitter #RememberingMyLibrary reveals hold Nevertheless, the pupils who listed the to Judith that such an institution has: ‘A library card knew exactly what she meant. They hear her was aand freefelt pass wonderment, wordsothers and words the to importance of seeing the ability to roam the world’ observes one as different and reaching out to them, user, whilstwith another iron all connecting them.quotes Theirsthe is awrought generation gates of Stalybridge library, ‘Read, Mark, too readily criticised for a lack of resilience, for Learn and Inwardly Digest.’ Others talk of being connected only superficially through social the escape that a library represented or of media. Theyit are so much They are the the refuge offered from more. an unkind world. generation in which we must invest hope and faith ensure that ‘Never Again’ is not merely a Mrs.toFay spent last Saturday peacefully phrase, it is a commitment. Each as I stacking the shelves and we are day inching speak pupils and gothrilled aroundme ourwas school closertotoour opening. What her I have every that reason to believe they are up to comment several boys, that some of whom affect a dislike of that reading, electrified by the challenge and they were will act out of love presence of values. a library in their school: ‘You and common mean I can borrow this and, like, read it, Miss?’ was the breathless utterance of one God Bless. pupil. Our library is at the heart of the school: Ben Davisa space for being open to and sharing ideas and experiences. It is openHeadteacher plan and its shelves serve as a reminder that there should be no barrier to anyone Twitter: @BenDavis1972 using its volumes or seeking knowledge, solace, entertainment or information. I can’t wait to see it come to life in the weeks ahead thanks to Mrs. Fay and her band of helpers.

around the school this week One of the undoubted highlights of the last week was our Holocaust Memorial Service and assembly. Each morning pupils presented on the history of the Holocaust, its impact and the many stories that are associated with it. On Holocaust Memorial Day itself we welcomed Judith Hayman to the school. She presented to a group of students and pupils from Y7 to 13 on her family history, the realities of the Holocaust and on the rise of antiSemitism today. She closed with a reflection on the challenge, but necessity, of reconciliation. Pupils led a service of prayers and reflections commemorating the Holocaust. Later that day we enjoyed the wisdom and insight of another guest speaker - John Pridmore. John’s talk on his journey from criminal to law-abiding citizen and Catholic is a fascinating one. It inspired our current Y11 to reflect on their own lives, with many choosing to take the Sacrament of Forgiveness after John’s talk. It is always exciting to see our Y11 student line up for their Sixth Form interviews. This week was no exception with over 130 pupils interviewed in one day. The quality of the candidates is very high and we look forward to another bumper crop of Y12s next academic year. A huge thanks to all parents and carers who attended our Year 9 Parents’ Evening. The overall attendance was 63%, roughly in line with last year’s figure. Parents commented positively on the new format in the 6th form and we will take on board and action the areas for improvement that have been identified. As we proceed through the year each Parents’ Evening will begin with a short safeguarding and e-safety presentation for parents and carers. We liked the play ‘The Curious Incident of the Dog in the Night Time’ so much that we went to it twice. A Drama trip and an English visit to the performance both took place this week and teachers and pupils reported a fantastic experience. We continue our focus on oracy this month in many ways. Pupils led an assembly on the them of Gifts and Talents both speaking and performing on a variety of musical instruments. In Year 7 Oracy lessons pupils have been further exploring British Values through the use of Harkness discussion. They have been debating the values using as a stimulus ‘All British people share the same values’. Year 9 have also been working on our whole school British Values theme both in school and at the People’s Museum. They have been collaborating with pupils from other schools on various projects to investigate the history and development of our values. Pupils in Year 10 visited FACT as part of our Digital Designers in Residence project whilst the School Council explored democracy with Unite In Schools, run by Unite the Union. We were very proud of our Young Carers as well who ran a training day for school staff from across Salford. We have secured our national Silver Young Carers Award and were thrilled to see our pupils lead adults and professionals in this way. Finally, congratulations to Charlotte Bradley on her selection for the U-15 England rugby squad.

ATTENDANCE We aim for 100% attendance for all of our students and have set 96% as satisfactory attendance for this year. Attendance is monitored period-by-period and statistics are published each week. Excellent attendance guarantees excellent learning. Best Attendance by form (w/b January 23rd):

All the news from the past week at St. Ambrose Barlow RC High School and Sixth Form, Swinton, Salford, UK

All the news from the past week at St. Ambrose Barlow RC High School and Sixth Form, Swinton, Salford, UK