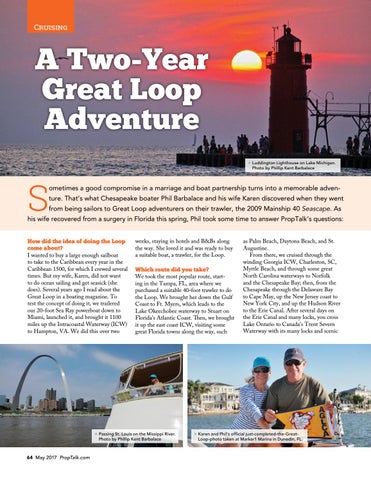 ometimes a good compromise in a marriage and boat partnership turns into a memorable adventure. That’s what Chesapeake boater Phil Barbalace and his wife Karen discovered when they went from being sailors to Great Loop adventurers on their trawler, the 2009 Mainship 40 Seascape. As

his wife recovered from a surgery in Florida this spring, Phil took some time to answer PropTalk’s questions: How did the idea of doing the Loop come about? I wanted to buy a large enough sailboat to take to the Caribbean every year in the Caribbean 1500, for which I crewed several times. But my wife, Karen, did not want to do ocean sailing and get seasick (she does). Several years ago I read about the Great Loop in a boating magazine. To test the concept of doing it, we trailered our 20-foot Sea Ray powerboat down to Miami, launched it, and brought it 1100 miles up the Intracoastal Waterway (ICW) to Hampton, VA. We did this over two

weeks, staying in hotels and B&Bs along the way. She loved it and was ready to buy a suitable boat, a trawler, for the Loop. Which route did you take? We took the most popular route, starting in the Tampa, FL, area where we purchased a suitable 40-foot trawler to do the Loop. We brought her down the Gulf Coast to Ft. Myers, which leads to the Lake Okeechobee waterway to Stuart on Florida’s Atlantic Coast. Then, we brought it up the east coast ICW, visiting some great Florida towns along the way, such

as Palm Beach, Daytona Beach, and St. Augustine. From there, we cruised through the winding Georgia ICW, Charleston, SC, Myrtle Beach, and through some great North Carolina waterways to Norfolk and the Chesapeake Bay; then, from the Chesapeake through the Delaware Bay to Cape May, up the New Jersey coast to New York City, and up the Hudson River to the Erie Canal. After several days on the Erie Canal and many locks, you cross Lake Ontario to Canada’s Trent Severn Waterway with its many locks and scenic