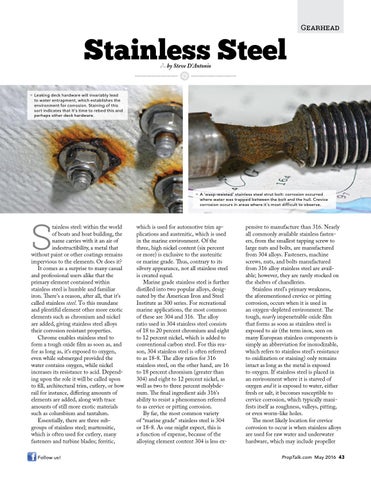 ##Leaking deck hardware will invariably lead to water entrapment, which establishes the environment for corrosion. Staining of this sort indicates that it’s time to rebed this and perhaps other deck hardware.

##A ‘wasp-waisted’ stainless steel strut bolt: corrosion occurred where water was trapped between the bolt and the hull. Crevice corrosion occurs in areas where it’s most difficult to observe.

tainless steel: within the world of boats and boat building, the name carries with it an air of indestructibility, a metal that without paint or other coatings remains impervious to the elements. Or does it? It comes as a surprise to many casual and professional users alike that the primary element contained within stainless steel is humble and familiar iron. There’s a reason, after all, that it’s called stainless steel. To this mundane and plentiful element other more exotic elements such as chromium and nickel are added, giving stainless steel alloys their corrosion resistant properties. Chrome enables stainless steel to form a tough oxide film as soon as, and for as long as, it’s exposed to oxygen, even while submerged provided the water contains oxygen, while nickel increases its resistance to acid. Depending upon the role it will be called upon to fill, architectural trim, cutlery, or bow rail for instance, differing amounts of elements are added, along with trace amounts of still more exotic materials such as columbium and tantalum. Essentially, there are three subgroups of stainless steel; martensitic, which is often used for cutlery, many fasteners and turbine blades; ferritic, Follow us!

which is used for automotive trim applications and austenitic, which is used in the marine environment. Of the three, high nickel content (six percent or more) is exclusive to the austenitic or marine grade. Thus, contrary to its silvery appearance, not all stainless steel is created equal. Marine grade stainless steel is further distilled into two popular alloys, designated by the American Iron and Steel Institute as 300 series. For recreational marine applications, the most common of these are 304 and 316. The alloy ratio used in 304 stainless steel consists of 18 to 20 percent chromium and eight to 12 percent nickel, which is added to conventional carbon steel. For this reason, 304 stainless steel is often referred to as 18-8. The alloy ratios for 316 stainless steel, on the other hand, are 16 to 18 percent chromium (greater than 304) and eight to 12 percent nickel, as well as two to three percent molybdenum. The final ingredient aids 316’s ability to resist a phenomenon referred to as crevice or pitting corrosion. By far, the most common variety of “marine grade” stainless steel is 304 or 18-8. As one might expect, this is a function of expense, because of the alloying element content 304 is less ex-

pensive to manufacture than 316. Nearly all commonly available stainless fasteners, from the smallest tapping screw to large nuts and bolts, are manufactured from 304 alloys. Fasteners, machine screws, nuts, and bolts manufactured from 316 alloy stainless steel are available; however, they are rarely stocked on the shelves of chandleries. Stainless steel’s primary weakness, the aforementioned crevice or pitting corrosion, occurs when it is used in an oxygen-depleted environment. The tough, nearly impenetrable oxide film that forms as soon as stainless steel is exposed to air (the term inox, seen on many European stainless components is simply an abbreviation for inoxodizable, which refers to stainless steel’s resistance to oxidization or staining) only remains intact as long as the metal is exposed to oxygen. If stainless steel is placed in an environment where it is starved of oxygen and it is exposed to water, either fresh or salt, it becomes susceptible to crevice corrosion, which typically manifests itself as roughness, valleys, pitting, or even worm-like holes. The most likely location for crevice corrosion to occur is when stainless alloys are used for raw water and underwater hardware, which may include propeller PropTalk.com May 2016 43