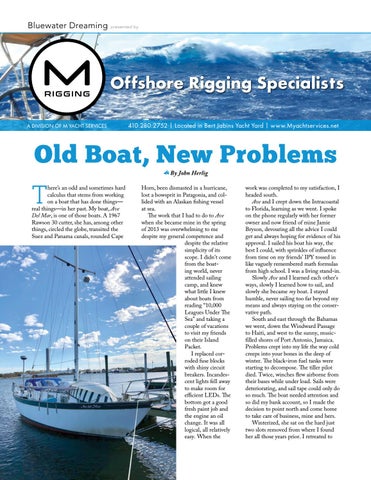 here’s an odd and sometimes hard calculus that stems from working on a boat that has done things— real things—in her past. My boat, Ave Del Mar, is one of those boats. A 1967 Rawson 30 cutter, she has, among other things, circled the globe, transited the Suez and Panama canals, rounded Cape

Horn, been dismasted in a hurricane, lost a bowsprit in Patagonia, and collided with an Alaskan fishing vessel at sea. The work that I had to do to Ave when she became mine in the spring of 2013 was overwhelming to me despite my general competence and despite the relative simplicity of its scope. I didn’t come from the boating world, never attended sailing camp, and knew what little I knew about boats from reading “10,000 Leagues Under The Sea” and taking a couple of vacations to visit my friends on their Island Packet. I replaced corroded fuse blocks with shiny circuit breakers. Incandescent lights fell away to make room for efficient LEDs. The bottom got a good fresh paint job and the engine an oil change. It was all logical, all relatively easy. When the

work was completed to my satisfaction, I headed south. Ave and I crept down the Intracoastal to Florida, learning as we went. I spoke on the phone regularly with her former owner and now friend of mine Jamie Bryson, devouring all the advice I could get and always hoping for evidence of his approval. I sailed his boat his way, the best I could, with sprinkles of influence from time on my friends’ IPY tossed in like vaguely remembered math formulas from high school. I was a living stand-in. Slowly Ave and I learned each other’s ways, slowly I learned how to sail, and slowly she became my boat. I stayed humble, never sailing too far beyond my means and always staying on the conservative path. South and east through the Bahamas we went, down the Windward Passage to Haiti, and west to the sunny, musicfilled shores of Port Antonio, Jamaica. Problems crept into my life the way cold creeps into your bones in the deep of winter. The black-iron fuel tanks were starting to decompose. The tiller pilot died. Twice, winches flew airborne from their bases while under load. Sails were deteriorating, and sail tape could only do so much. The boat needed attention and so did my bank account, so I made the decision to point north and come home to take care of business, mine and hers. Winterized, she sat on the hard just two slots removed from where I found her all those years prior. I retreated to