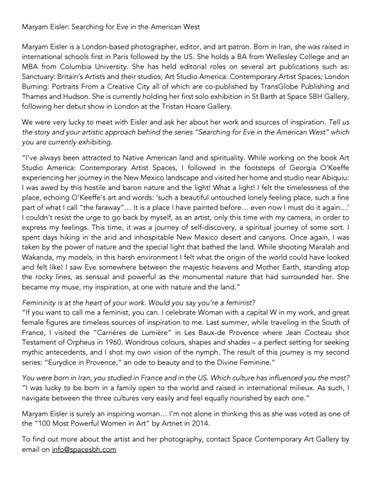 Maryam Eisler: Searching for Eve in the American West Maryam Eisler is a London-based photographer, editor, and art patron. Born in Iran, she was raised in international schools first in Paris followed by the US. She holds a BA from Wellesley College and an MBA from Columbia University. She has held editorial roles on several art publications such as: Sanctuary: Britain’s Artists and their studios; Art Studio America: Contemporary Artist Spaces; London Burning: Portraits From a Creative City all of which are co-published by TransGlobe Publishing and Thames and Hudson. She is currently holding her first solo exhibition in St Barth at Space SBH Gallery, following her debut show in London at the Tristan Hoare Gallery. We were very lucky to meet with Eisler and ask her about her work and sources of inspiration. Tell us the story and your artistic approach behind the series “Searching for Eve in the American West” which you are currently exhibiting. “I’ve always been attracted to Native American land and spirituality. While working on the book Art Studio America: Contemporary Artist Spaces, I followed in the footsteps of Georgia O’Keeffe experiencing her journey in the New Mexico landscape and visited her home and studio near Abiquiu: I was awed by this hostile and baron nature and the light! What a light! I felt the timelessness of the place, echoing O’Keeffe’s art and words: ‘such a beautiful untouched lonely feeling place, such a fine part of what I call “the faraway”… It is a place I have painted before… even now I must do it again…’ I couldn’t resist the urge to go back by myself, as an artist, only this time with my camera, in order to express my feelings. This time, it was a journey of self-discovery, a spiritual journey of some sort. I spent days hiking in the arid and inhospitable New Mexico desert and canyons. Once again, I was taken by the power of nature and the special light that bathed the land. While shooting Maralah and Wakanda, my models, in this harsh environment I felt what the origin of the world could have looked and felt like! I saw Eve somewhere between the majestic heavens and Mother Earth, standing atop the rocky lines, as sensual and powerful as the monumental nature that had surrounded her. She became my muse, my inspiration, at one with nature and the land.” Femininity is at the heart of your work. Would you say you’re a feminist? “If you want to call me a feminist, you can. I celebrate Woman with a capital W in my work, and great female figures are timeless sources of inspiration to me. Last summer, while traveling in the South of France, I visited the “Carrières de Lumière” in Les Baux-de Provence where Jean Cocteau shot Testament of Orpheus in 1960. Wondrous colours, shapes and shades – a perfect setting for seeking mythic antecedents, and I shot my own vision of the nymph. The result of this journey is my second series: “Eurydice in Provence,” an ode to beauty and to the Divine Feminine.” You were born in Iran, you studied in France and in the US. Which culture has influenced you the most? “I was lucky to be born in a family open to the world and raised in international milieux. As such, I navigate between the three cultures very easily and feel equally nourished by each one.” Maryam Eisler is surely an inspiring woman… I’m not alone in thinking this as she was voted as one of the “100 Most Powerful Women in Art” by Artnet in 2014. To find out more about the artist and her photography, contact Space Contemporary Art Gallery by email on info@spacesbh.com