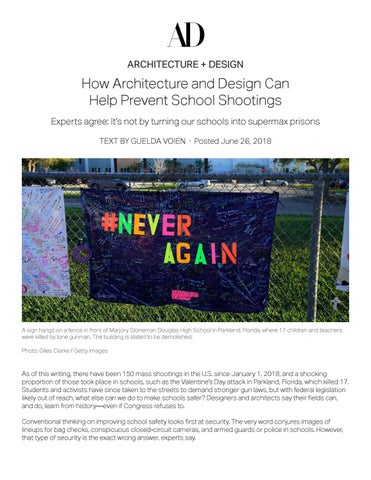 How Architecture and Design Can Help Prevent School Shootings Experts agree: It’s not by turning our schools into supermax prisons TEXT BY GUELDA VOIEN · Posted June 26, 2018

A sign hangs on a fence in front of Marjory Stoneman Douglas High School in Parkland, Florida, where 17 children and teachers were killed by lone gunman. The building is slated to be demolished. Photo: Giles Clarke / Getty Images

As of this writing, there have been 150 mass shootings in the U.S. since January 1, 2018, and a shocking proportion of those took place in schools, such as the Valentine’s Day attack in Parkland, Florida, which killed 17. Students and activists have since taken to the streets to demand stronger gun laws, but with federal legislation likely out of reach, what else can we do to make schools safer? Designers and architects say their fields can, and do, learn from history—even if Congress refuses to. Conventional thinking on improving school safety looks first at security. The very word conjures images of lineups for bag checks, conspicuous closed-circuit cameras, and armed guards or police in schools. However, that type of security is the exact wrong answer, experts say.

“Ultimately, it’s about viewing security as an integrated part and parcel of the overall architectural design process,” says Marc Gordon, a partner with the architectural firm Spacesmith. “Necessary measures like access control, turnstiles, or even x-ray machines and metal detectors can be located to better relate to the flow of foot traffic and the way people move through these buildings.” Security works best when it is least disruptive, both because invisible surveillance is harder to game and because, inevitably, corners will be cut if security feels too intrusive. Nowadays, “security measures are more holistically part of an overall design aesthetic, and better integrated even as they become more effective,” Gordon says. And the technologies themselves are improving all the time. Security elements are now “architectural, streamlined, and use materials like automatic LED-edge-lit glass gates and stainless steel, and can be customized with different materials to match the building’s design aesthetic,” he adds. Of course, that presumes it even has one. It will take more than a well-placed bollard or well-designed turnstile to make a school secure, say designers and architects grappling with this problem.

In the new Sandy Hook Elementary School, the use of laminated glass technology keeps windows resistant to impact but very much still a part of the essential design scheme, allowing students and teachers to connect with the outside. Photo: Robert Benson Photography / Courtesy of Svigals+Partners

“I’m old enough to have gone to a school that looked pretty institutional,” says architect Julia McFadden. And the first design impulse after a tragedy like Parkland and implementing basic security checks is usually to make them even more institutional. More purportedly secure spaces would have windows up higher, or even eliminated entirely, she says. But, McFadden, who helped design the new Sandy Hook Elementary School, urges us to resist that impulse. “The last thing we want is to turn our schools into fortresses,” she says. Schools are rarely a place that gets architectural attention, even though kids spend the bulk of their formative years there. Urban legend has it that a swath of California public schools were designed by the same architects as the state’s prisons, and it seems quite probable. Could this be a small part of why violent behavior also persists in schools? Maybe it’s even time to rethink what our notion of “secure” implies.

THE PSYCHOLOGY OF DESIGN “When your space confirms your ideals,” better social outcomes are likely, says McFadden. In designing the new school, she made a point to learn about the community she was serving. She knew Sandy Hooks families carried trauma from the 2012 shooting that killed 20 children. So she employed “biophyllic design principles, to connect us to nature, and the use of color and texture,” to make the space reflect the connections with one another and nature that she thought would help heal the community. Of course, to confirm any ideals there must be jointly held values, which can seem unachievable in a time of such political division. But even when ideals aren’t clear, design can provide context. Context reminds the inhabitants of a space not only that they have peers, and where they stand in relationship to a larger social world, but it can remind us that we are in a physical world with unique attributes, as well. By emphasizing or thematizing any geographic variation to be found, we can make a space more in context. In the case of Sandy Hook, McFadden took care to let buildings look onto the rolling hills that part of Connecticut features, and to let students see streams and trees from windows when possible. Trees are, after all, strongly correlated with a higher threshold for stress, and school can be stressful. There are also near-universals in building and design that can make environments more hospitable. Textures are surprisingly important, as they invite touch. “When you get invited to touch things, it crosses the intellectual and emotional boundaries we have between us and the environment,” McFadden says. Blues are thought to be soothing and calming, adds Peter Henderson, a Toronto-based design director, whose previous work has looked at children’s mental health. Yellows are thought to conjure frustration, meanwhile, and may be best avoided. Rounded structures are also thought to have a calming effect, Henderson says, and feel less threatening. Orientation is also important. “Being able to orient yourself is just a fundamental human need,” McFadden says. “You feel safe, you know which direction you’re being approached from.” This means orienting yourself directionally in space and also socially. Natural views can help us orient ourselves, as can views of larger public gathering spaces.

REDRAWING THE SOCIAL ENVIRONMENT To be sure, conventional security measures are also of use; minimizing their intrusiveness is the main concern. In the Sandy Hook design, for instance, a security barrier took the form of a sort of moat—a “rain garden” that circulates captured rainwater from the roof. And of course, round, blue interior design encircled by sustainable moats won’t fix gun violence, Henderson says. Which is why each designer mentioned the larger question: how to redraw the social environment. Rather than building a panopticon and calling it a school, it’s time to ask how students interact at school and how that should change. Architecture and design can be tools to that end.

Emergency crews stage in the parking lot of Santa Fe High School, where at least 10 students were killed on May 18, 2018 in Santa Fe, Texas. Photo: Bob Levey / Getty Images

Industrial design at the user level has in recent years taken on daunting social conundrums with some success. In Amsterdam, for instance, an apartment complex had a problem with internal package theft. So design collective Ritevelt sent a series of packages, all to the wrong address. It worked—the residents were forced to meet one another and interact, and stealing dropped precipitously. Designers should “focus our efforts on the amygdala, the center of fear and stress,” says Pablo Honey, head of product at Red Antler, a design firm specializing in branding. He suggests that design strive to minimize amygdala-assaulting user interfaces such as standing in pointless lines or having to respond to blaring noises— and while Honey means generally, in our cities, these examples are off-puttingly relevant to schools. Honey calls poorly designed literal interfaces in our lives “microaggressions of the system.” If the way students interact with systems that cause them stress and frustration in those difficult years can be changed, students may build better psychological defenses to the social slights that burden many an isolated teen. Design can also strive to make students, like the Dutch neighbors, more aware of who exactly their fellow students are—and hopefully less prone to do violence to them. 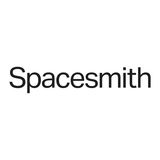 How Architecture and Design Can Help Prevent School Shootings

Experts agree: It’s not by turning our schools into supermax prisons.

How Architecture and Design Can Help Prevent School Shootings

Experts agree: It’s not by turning our schools into supermax prisons.