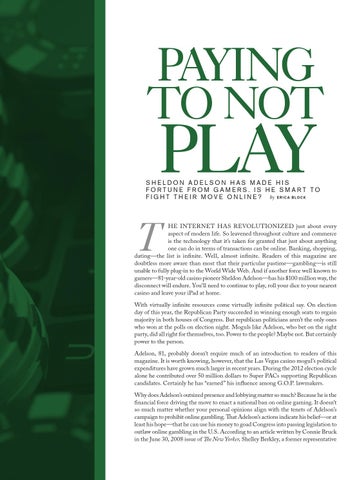 HE INTERNET HAS REVOLUTIONIZED just about every aspect of modern life. So leavened throughout culture and commerce is the technology that it’s taken for granted that just about anything one can do in terms of transactions can be online. Banking, shopping, dating—the list is infinite. Well, almost infinite. Readers of this magazine are doubtless more aware than most that their particular pastime—gambling—is still unable to fully plug-in to the World Wide Web. And if another force well known to gamers—81-year-old casino pioneer Sheldon Adelson—has his $100 million way, the disconnect will endure. You’ll need to continue to play, roll your dice to your nearest casino and leave your iPad at home. With virtually infinite resources come virtually infinite political say. On election day of this year, the Republican Party succeeded in winning enough seats to regain majority in both houses of Congress. But republican politicians aren’t the only ones who won at the polls on election night. Moguls like Adelson, who bet on the right party, did all right for themselves, too. Power to the people? Maybe not. But certainly power to the person. Adelson, 81, probably doesn’t require much of an introduction to readers of this magazine. It is worth knowing, however, that the Las Vegas casino mogul’s political expenditures have grown much larger in recent years. During the 2012 election cycle alone he contributed over 50 million dollars to Super PACs supporting Republican candidates. Certainly he has “earned” his influence among G.O.P. lawmakers. Why does Adelson’s outsized presence and lobbying matter so much? Because he is the financial force driving the move to enact a national ban on online gaming. It doesn’t so much matter whether your personal opinions align with the tenets of Adelson’s campaign to prohibit online gambling. That Adelson’s actions indicate his belief—or at least his hope—that he can use his money to goad Congress into passing legislation to outlaw online gambling in the U.S. According to an article written by Connie Bruck in the June 30, 2008 issue of The New Yorker, Shelley Berkley, a former representative

In this issue, learn the power in props, add a few stops to your bucket list and don't forget to vote for your favorite properties in Southern Gaming's 2015 Reader's Choice awards. 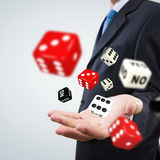