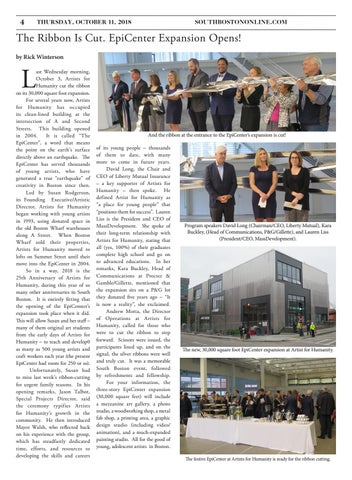 The Ribbon Is Cut. EpiCenter Expansion Opens! by Rick Winterson

ast Wednesday morning, October 3, Artists for Humanity cut the ribbon on its 30,000 square foot expansion. For several years now, Artists for Humanity has occupied its clean-lined building at the intersection of A and Second Streets. This building opened in 2004. It is called “The EpiCenter”, a word that means the point on the earth’s surface directly above an earthquake. The EpiCenter has served thousands of young artists, who have generated a true “earthquake” of creativity in Boston since then. Led by Susan Rodgerson, its Founding Executive/Artistic Director, Artists for Humanity began working with young artists in 1993, using donated space in the old Boston Wharf warehouses along A Street. When Boston Wharf sold their properties, Artists for Humanity moved to lofts on Summer Street until their move into the EpiCenter in 2004. So in a way, 2018 is the 25th Anniversary of Artists for Humanity, during this year of so many other anniversaries in South Boston. It is entirely fitting that the opening of the EpiCemter’s expansion took place when it did. This will allow Susan and her staff – many of them original art students from the early days of Artists for Humanity – to teach and develop0 as many as 500 young artists and craft workers each year (the present EpiCenter had room for 250 or so). Unfortunately, Susan had to miss last week’s ribbon-cutting for urgent family reasons. In his opening remarks, Jason Talbot, Special Projects Director, said the ceremony typifies Artists for Humanity’s growth in the community. He then introduced Mayor Walsh, who reflected back on his experience with the group, which has steadfastly dedicated time, efforts, and resources to developing the skills and careers

And the ribbon at the entrance to the EpiCenter’s expansion is cut! of its young people – thousands of them to date, with many more to come in future years. David Long, the Chair and CEO of Liberty Mutual Insurance – a key supporter of Artists for Humanity – then spoke. He defined Artist for Humanity as “a place for young people” that “positions them for success”. Lauren Liss is the President and CEO of MassDevelopment. She spoke of their long-term relationship with Artists for Humanity, stating that all (yes, 100%) of their graduates complete high school and go on to advanced educations. In her remarks, Kara Buckley, Head of Communications at Procter & Gamble/Gillette, mentioned that the expansion sits on a P&G lot they donated five years ago – “It is now a reality”, she exclaimed. Andrew Motta, the Director of Operations at Artists for Humanity, called for those who were to cut the ribbon to step forward. Scissors were issued, the participants lined up, and on the signal, the silver ribbons were well and truly cut. It was a memorable South Boston event, followed by refreshments and fellowship. For your information, the three-story EpiCenter expansion (30,000 square feet) will include a mezzanine art gallery, a photo studio, a woodworking shop, a metal fab shop, a printing area, a graphic design studio (including video/ animation), and a much-expanded painting studio. All for the good of young, adolescent artists in Boston.

The new, 30,000 square foot EpiCenter expansion at Artist for Humanity.

The festive EpiCenter at Artists for Humanity is ready for the ribbon cutting.