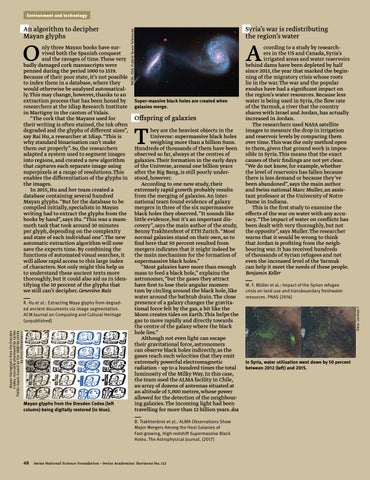 Mayan hieroglyphs from the Dresden Codex, manually processed by Carlos Pallán Gayol, based on the 1880 facsimile by Ernst Förstemann.

Mayan glyphs from the Dresden Codex (left column) being digitally restored (in blue).

hey are the heaviest objects in the Universe: supermassive black holes weighing more than a billion Suns. Hundreds of thousands of them have been observed so far, always at the centres of galaxies. Their formation in the early days of the Universe, around one billion years after the Big Bang, is still poorly understood, however. According to one new study, their extremely rapid growth probably results from the merging of galaxies. An international team found evidence of galaxy mergers in three of the six supermassive black holes they observed. “It sounds like little evidence, but it’s an important discovery”, says the main author of the study, Benny Trakhtenbrot of ETH Zurich. “Most normal galaxies stand on their own, so to find here that 50 percent resulted from mergers indicates that it might indeed be the main mechanism for the formation of supermassive black holes.” “Most galaxies have more than enough mass to feed a black hole,” explains the astronomer, “but the gases they attract have first to lose their angular momentum by circling around the black hole, like water around the bathtub drain. The close presence of a galaxy changes the gravitational force felt by the gas, a bit like the Moon creates tides on Earth. This helps the gas to move rapidly and directly towards the centre of the galaxy where the black hole lies.” Although not even light can escape their gravitational force, astronomers can observe black holes indirectly, as the gases reach such velocities that they emit extremely powerful electromagnetic radiation – up to a hundred times the total luminosity of the Milky Way. In this case, the team used the ALMA facility in Chile, an array of dozens of antennas situated at an altitude of 5,000 metres, whose power allowed for the detection of the neighbouring galaxies. The incoming light had been travelling for more than 12 billion years. dsa B. Trakhtenbrot et al.: ALMA Observations Show Major Mergers Among the Host Galaxies of Fast-growing, High-redshift Supermassive Black Holes. The Astrophysical Journal, (2017)

nly three Mayan books have survived both the Spanish conquest and the ravages of time. These very badly damaged cork manuscripts were penned during the period 1000 to 1519. Because of their poor state, it’s not possible to index them in a database, where they would otherwise be analysed automatically. This may change, however, thanks to an extraction process that has been honed by researchers at the Idiap Research Institute in Martigny in the canton of Valais. “The cork that the Mayans used for their writing is often stained, the ink often degraded and the glyphs of different sizes”, say Rai Hu, a researcher at Idiap. “This is why standard binarisation can’t make them out properly”. So, the researchers adapted a system used to segment images into regions, and created a new algorithm that captures each separate image using superpixels at a range of resolutions. This enables the differentiation of the glyphs in the images. In 2015, Hu and her team created a database containing several hundred Mayan glyphs. “But for the database to be compiled initially, specialists in Mayan writing had to extract the glyphs from the books by hand”, says Hu. “This was a mammoth task that took around 30 minutes per glyph, depending on the complexity and state of each individual one”. The new automatic extraction algorithm will now save the experts time. By combining the functions of automated visual searches, it will allow rapid access to this large index of characters. Not only might this help us to understand these ancient texts more thoroughly, but it could also aid us in identifying the 10 percent of the glyphs that we still can’t decipher. Geneviève Ruiz

ccording to a study by researchers in the US and Canada, Syria’s irrigated areas and water reservoirs behind dams have been depleted by half since 2013, the year that marked the beginning of the migratory crisis whose roots lie in the war. The war and the popular exodus have had a significant impact on the region’s water resources. Because less water is being used in Syria, the flow rate of the Yarmuk, a river that the country shares with Israel and Jordan, has actually increased in Jordan. The researchers used NASA satellite images to measure the drop in irrigation and reservoir levels by comparing them over time. This was the only method open to them, given that ground work is impossible in Syria. This means that the exact causes of their findings are not yet clear. “We do not know, for example, whether the level of reservoirs has fallen because there is less demand or because they’ve been abandoned”, says the main author and Swiss national Marc Muller, an assistant professor at the University of Notre Dame in Indiana. This is the first study to examine the effects of the war on water with any accuracy. “The impact of water on conflicts has been dealt with very thoroughly, but not the opposite”, says Muller. The researcher warns that it would be wrong to think that Jordan is profiting from the neighbouring war. It has received hundreds of thousands of Syrian refugees and not even the increased level of the Yarmuk can help it meet the needs of these people. ­Benjamin Keller M. F. Müller et al.: Impact of the Syrian refugee crisis on land use and transboundary freshwater resources. PNAS (2016)

An algorithm to decipher ­Mayan glyphs

At the end of life 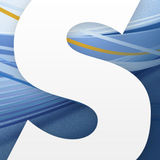