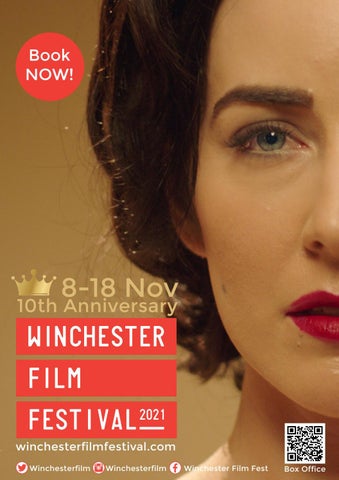 Welcome to the 10th anniversary edition of Winchester Film Festival. After everyone having to keep our distance to counter the threat of COVID-19, in a country divided by Brexit and polarised by Black Lives Matter, in a world threatened by global warming and increasingly fragmented by nationalism fuelled by fake news... after all this, a sincere and heartfelt welcome is perhaps more meaningful than ever. It is our way of helping reunite us by offering an arena where we can laugh, gasp and wonder together, no matter what our backgrounds, physical attributes or ideologies. This year’s collection of films promise do just that - delight, excite, provoke and inspire. To celebrate our 10th anniversary, our 2021 programme also includes special screenings of the most eye-opening and remarkable award winning films from our decade of festival editions. Enjoy! John Hayes Festival Director

4 films that made me laugh, cry and grow. John Hayes, Festival direcotor

Director: Natalia Lampropoulou Producer: Sotiris Petridis Cast: Grace Kendeall, Juston Deeley, Chris Devlin Greece, 2020, 10:07, subtitled A middle-aged woman works on a sex phone line so that she can stay at home and support her paraplegic daughter. It’s a good idea … until there is an unexpected caller.

Details about Venues &amp; Dates are on the WFF_Box Office at: winchesterfilmfestival.com

I am proud to present the five short films I have personally selected for this special screening to mark the 10th anniversary of Winchester Film Festival. The purpose of the festival is not just to excite and delight, but to pose questions, provoke debate and test boundaries… so I also feel a little trepidation, as you may not like all five! The protagonists of each of these very different films are all confronted with an unexpected new challenge that would likely break or evolve any one of us. In Calamity, a mother must choose to either reject or accept her son’s chosen path in love. Mimicry follows a student as she decides to either live a lie or follow the taboo path to her authentic self. In Nicole’s Cage, a couple who think they know one another engage in an erotic game that reveals their true identities. Hostel Eden’s protagonist will find solace either at the end of a rope or in the arms of an unlikely lover. In Whoever Was Using This Bed, a mysterious phone call provokes a husband and wife to examine their darkest fears and desires. Whether you are watching these eye-opening gems for the first time or revisiting them with new eyes, I naturally hope all five will delight you. But any choice comes with some trepidation and herein lies the joy of Winchester Film Festival - the joy of allowing us to surprise ourselves with something different. John Hayes winchesterfilmfestival.com

Winchester’s window into the global zeitgeist 4

Our mission is to screen films that entertain, broaden horizons, provoke debate and reflect the burning issues of our time. John Hayes Festival director

4 films that made me laugh, cry and grow. John Hayes, Festival direcotor

Director: Natalia Lampropoulou Producer: Sotiris Petridis Cast: Grace Kendeall, Juston Deeley, Chris Devlin Greece, 2020, 10:07, subtitled A middle-aged woman works on a sex phone line so that she can stay at home and support her paraplegic daughter. It’s a good idea … until there is an unexpected caller.

FILMS To celebrate our 10th anniversary, the 2021 programme includes special screenings of the most eyeopening and remarkable award-winning films from the festival’s 10 year history,

4 film crews documenting the Festival 25 Interviews Press coverage on TV and in newspapers from 6 countries including the BBC, The Times and ITV

Well done Winchester for having the strength and the courage to not only screen but award such a brilliant and controversial film.

Our story Ten years ago, in the cramped basement of the old Artcafe in Jewry Street, the first edition of what is now the Wincester Film Festival took place. It screened no more than 15 micro-films by local filmmakers. Today the festival selects from thousands of award winning short and feature length films from five continents and over 60 countries, with a glitzy black tie award ceremony that attracts many international filmmakers. During its ten year history, the festival has screened over 15 World premieres, 35 European premieres and over 40 UK premieres, many with visiting directors participating in audience Q&amp;As. One such film was Detainment by Irishman Vincent Lambe, the polemic drama based on the real interview transcripts from the tragic James Bulger case that shocked the world in 1993. The film, which some see as humanising the two young murderers, continues to incite public outrage. So controversial was the film that on its release in 2018 no cinema or festival in the UK dared screen it. The only exception was Winchester Film Festival which not only premiered Detainment in the UK but also awarded it the accolade of Best Foreign Short Film. At this premiere, director Vincent Lambe and David James Smith who wrote a seminal book about the case, met one another for the first time at a unique Q&amp;A at the Discovery Centre. Two months later Detainment was nominated for an Oscar, earning Winchester Film Festival the reputation as a ‘brave’ festival and firmly placing Winchester on the world map of contemporary culture.

The Festival’s metoeric rise has been no fluke. It has been down to the good will and adventurous spirit of a multitude of amazing industry professionals, volunteers, visionary sponsors, supporters and partners - in particular, our working partner the University of Winchester. It is then with immense gratitude to all those involved that we are here today to offer you astonishing films that entertain, broaden horizons, provoke debate and reflect the burning issues of our time.

Such a wonderful and welcoming festival with excellent, very personal communications, great networking and a really high quality selection of international films that really make you think. Really impressed and highly recommend. Professional photo shoot, interviews and reviews for film makers at the gala night, nightly film makers’ networking drinks, great screening venues and a really fun and switched-on festival team PLUS £1000 prizes. Winchester is also beautiful and easy to get around …what’s not to like?!! Angela Gourley, Producer

The Winchester Film Festival was a wonderful festival to attend. Excellent communication, amazing festival staff and it was fascinating to see how they run things. They take brilliant care of filmmakers - excellent accommodation, networking events and an amazing black-tie awards ceremony! For the screening of my film, they even invited special guests and journalists with a specific interest in the topic of my film which made it a very special experience. It was a huge honour to win Best Foreign Short Film for &#39;Detainment&#39;. Thank you so much for the beautiful award and prize money and for a really brilliant festival in such a charming place! Vicent Lambe, Oscar Nominee.

Amazing festival, brilliant line up of films, really well promoted and attended screenings. I really enjoyed attending the festival, the audience engagement and turn out was fantastic - a great platform with a passion for independent cinema. Greg Hall, Director

We absolutely loved attending the Winchester Film Festival and we definitely going back and urge any filmmakers out there to submit their film. A festival that cares for their upcoming filmmakers. Submit your film or you will regret it! Elicit Picture, Production company

The Winchester Film Festival is everything you&#39;d want from a film festival! The team are terrific, and communication was easy and quick. I felt welcomed and part of the event, and I am honoured that our film screened this year. I particularly love the time given to audience Q&amp;A&#39;s after each screen. Can&#39;t wait for next years! Daniel Harding, Director

Wonderful festival! John and his team really care about the filmmakers, we had one of the best festival experiences with Winchester Short Film Festival. Brilliant selection of films, great screenings, everything was outstanding! Thrilled to have been part of such a fantastic festival! Branko Tomovic, Director 43

MAKE THE CUT Study film at the University of Winchester

pri Buy at the to u it costs s . it print

About Winchester Film Festival - a decade of eye-opening, award winning films from across the globe.