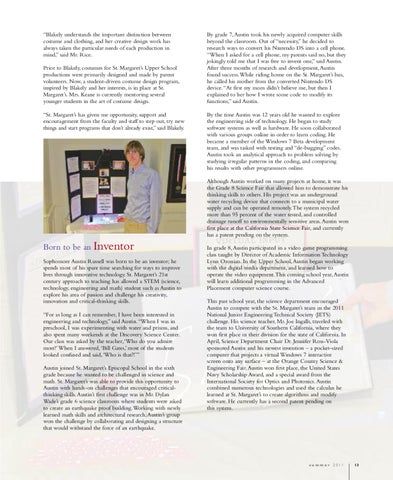 “Blakely understands the important distinction between costume and clothing, and her creative design work has always taken the particular needs of each production in mind,” said Mr. Rice. Prior to Blakely, costumes for St. Margaret’s Upper School productions were primarily designed and made by parent volunteers. Now, a student-driven costume design program, inspired by Blakely and her interests, is in place at St. Margaret’s. Mrs. Keane is currently mentoring several younger students in the art of costume design. “St. Margaret’s has given me opportunity, support and encouragement from the faculty and staff to step out, try new things and start programs that don’t already exist,” said Blakely.

By grade 7, Austin took his newly acquired computer skills beyond the classroom. Out of “necessity,” he decided to research ways to convert his Nintendo DS into a cell phone. “When I asked for a cell phone, my parents said no, but they jokingly told me that I was free to invent one,” said Austin. After three months of research and development, Austin found success. While riding home on the St. Margaret’s bus, he called his mother from the converted Nintendo DS device. “At first my mom didn’t believe me, but then I explained to her how I wrote some code to modify its functions,” said Austin. By the time Austin was 12 years old he wanted to explore the engineering side of technology. He began to study software systems as well as hardware. He soon collaborated with various groups online in order to learn coding. He became a member of the Windows 7 Beta development team, and was tasked with testing and “de-bugging” codes. Austin took an analytical approach to problem solving by studying irregular patterns in the coding, and comparing his results with other programmers online. Although Austin worked on many projects at home, it was the Grade 8 Science Fair that allowed him to demonstrate his thinking skills to others. His project was an underground water recycling device that connects to a municipal water supply and can be operated remotely. The system recycled more than 95 percent of the water tested, and controlled drainage runoff to environmentally sensitive areas. Austin won first place at the California State Science Fair, and currently has a patent pending on the system.

Born to be an Inventor Sophomore Austin Russell was born to be an inventor; he spends most of his spare time searching for ways to improve lives through innovative technology. St. Margaret’s 21st century approach to teaching has allowed a STEM (science, technology, engineering and math) student such as Austin to explore his area of passion and challenge his creativity, innovation and critical-thinking skills. “For as long as I can remember, I have been interested in engineering and technology,” said Austin. “When I was in preschool, I was experimenting with water and prisms, and also spent many weekends at the Discovery Science Center. Our class was asked by the teacher, ‘Who do you admire most?’ When I answered, ‘Bill Gates,’ most of the students looked confused and said, ‘Who is that?!’” Austin joined St. Margaret’s Episcopal School in the sixth grade because he wanted to be challenged in science and math. St. Margaret’s was able to provide this opportunity to Austin with hands-on challenges that encouraged criticalthinking skills. Austin’s first challenge was in Mr. Dylan Wade’s grade 6 science classroom where students were asked to create an earthquake proof building. Working with newly learned math skills and architectural research, Austin’s group won the challenge by collaborating and designing a structure that would withstand the force of an earthquake.

In grade 8, Austin participated in a video game programming class taught by Director of Academic Information Technology Lynn Ozonian. In the Upper School, Austin began working with the digital media department, and learned how to operate the video equipment. This coming school year, Austin will learn additional programming in the Advanced Placement computer science course. This past school year, the science department encouraged Austin to compete with the St. Margaret’s team in the 2011 National Junior Engineering Technical Society (JETS) challenge. His science teacher, Mr. Joe Ingalls, traveled with the team to University of Southern California, where they won first place in their division for the state of California. In April, Science Department Chair Dr. Jennifer Ross-Viola sponsored Austin and his newest invention – a pocket-sized computer that projects a virtual Windows 7 interactive screen onto any surface – at the Orange County Science &amp; Engineering Fair. Austin won first place, the United States Navy Scholarship Award, and a special award from the International Society for Optics and Photonics. Austin combined numerous technologies and used the calculus he learned at St. Margaret’s to create algorithms and modify software. He currently has a second patent pending on this system.

St. Margaret's Episcopal School-Educating the hearts and minds of young people for lives of learning, leadership and service. 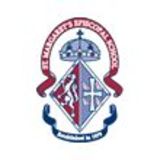