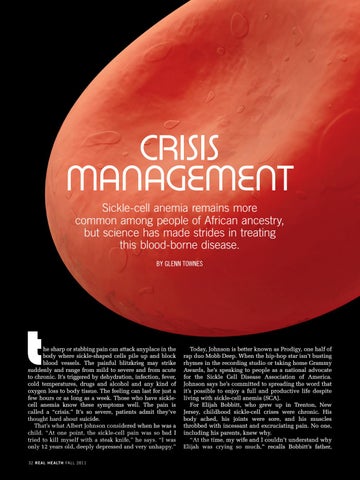 CRISIS MANAGEMENT Sickle-cell anemia remains more common among people of African ancestry, but science has made strides in treating this blood-borne disease. BY GLENN TOWNES

he sharp or stabbing pain can attack anyplace in the body where sickle-shaped cells pile up and block blood vessels. The painful blitzkrieg may strike suddenly and range from mild to severe and from acute to chronic. It’s triggered by dehydration, infection, fever, cold temperatures, drugs and alcohol and any kind of oxygen loss to body tissue. The feeling can last for just a few hours or as long as a week. Those who have sicklecell anemia know these symptoms well. The pain is called a “crisis.” It’s so severe, patients admit they’ve thought hard about suicide. That’s what Albert Johnson considered when he was a child. “At one point, the sickle-cell pain was so bad I tried to kill myself with a steak knife,” he says. “I was only 12 years old, deeply depressed and very unhappy.” 3 2 RE A L H E A LTH FA LL 2 011

Today, Johnson is better known as Prodigy, one half of rap duo Mobb Deep. When the hip-hop star isn’t busting rhymes in the recording studio or taking home Grammy Awards, he’s speaking to people as a national advocate for the Sickle Cell Disease Association of America. Johnson says he’s committed to spreading the word that it’s possible to enjoy a full and productive life despite living with sickle-cell anemia (SCA). For Elijah Bobbitt, who grew up in Trenton, New Jersey, childhood sickle-cell crises were chronic. His body ached, his joints were sore, and his muscles throbbed with incessant and excruciating pain. No one, including his parents, knew why. “At the time, my wife and I couldn’t understand why Elijah was crying so much,” recalls Bobbitt’s father,