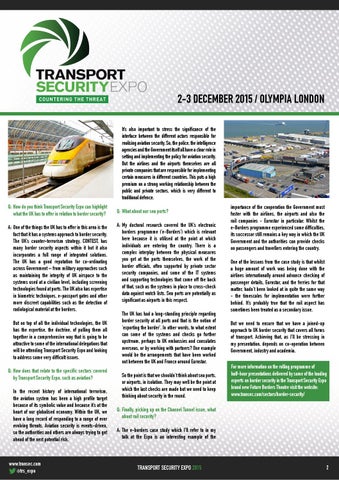 2-3 DECEMBER 2015 / OLYMPIA LONDON It’s also important to stress the significance of the interface between the different actors responsible for realising aviation security. So, the police, the intelligence agencies and the Government itself all have a clear role in setting and implementing the policy for aviation security. But the airlines and the airports themselves are all private companies that are responsible for implementing certain measures in different countries. This puts a high premium on a strong working relationship between the public and private sectors, which is very different to traditional defence. Q: How do you think Transport Security Expo can highlight what the UK has to offer in relation to border security? A: One of the things the UK has to offer in this area is the fact that it has a systems approach to border security. The UK’s counter-terrorism strategy, CONTEST, has many border security aspects within it but it also incorporates a full range of integrated solutions. The UK has a good reputation for co-ordinating across Government – from military approaches such as maintaining the integrity of UK airspace to the systems used at a civilian level, including screening technologies found at ports. The UK also has expertise in biometric techniques, e-passport gates and other more discreet capabilities such as the detection of radiological material at the borders. But on top of all the individual technologies, the UK has the expertise, the doctrine, of pulling them all together in a comprehensive way that is going to be attractive to some of the international delegations that will be attending Transport Security Expo and looking to address some very difficult issues. Q: How does that relate to the specific sectors covered by Transport Security Expo, such as aviation? In the recent history of international terrorism, the aviation system has been a high profile target because of its symbolic value and because it’s at the heart of our globalised economy. Within the UK, we have a long record of responding to a range of ever evolving threats. Aviation security is events-driven, so the authorities and others are always trying to get ahead of the next potential risk.

Q: What about our sea ports? A: My doctoral research covered the UK’s electronic borders programme (‘e-Borders’) which is relevant here because it is utilised at the point at which individuals are entering the country. There is a complex interplay between the physical measures you get at the ports themselves, the work of the border officials, often supported by private sector security companies, and some of the IT systems and supporting technologies that come off the back of that, such as the systems in place to cross-check data against watch lists. Sea ports are potentially as significant as airports in this respect. The UK has had a long-standing principle regarding border security at all ports and that is the notion of ‘exporting the border’. In other words, to what extent can some of the systems and checks go further upstream, perhaps to UK embassies and consulates overseas, or by working with partners? One example would be the arrangements that have been worked out between the UK and France around Eurostar. So the point is that we shouldn’t think about sea ports, or airports, in isolation. They may well be the point at which the last checks are made but we need to keep thinking about security in the round.

importance of the cooperation the Government must foster with the airlines, the airports and also the rail companies - Eurostar in particular. Whilst the e-Borders programme experienced some difficulties, its successor still remains a key way in which the UK Government and the authorities can provide checks on passengers and travellers entering the country. One of the lessons from the case study is that whilst a huge amount of work was being done with the airlines internationally around advance checking of passenger details, Eurostar, and the ferries for that matter, hadn’t been looked at in quite the same way - the timescales for implementation were further behind. It’s probably true that the rail aspect has sometimes been treated as a secondary issue. But we need to ensure that we have a joined-up approach to UK border security that covers all forms of transport. Achieving that, as I’ll be stressing in my presentation, depends on co-operation between Government, industry and academia. For more information on the rolling programme of half-hour presentations delivered by some of the leading experts on border security in the Transport Security Expo brand new Future Borders Theatre visit the website: www.transec.com/sectors/border-security/

Q: Finally, picking up on the Channel Tunnel issue, what about rail security? A: The e-borders case study which I’ll refer to in my talk at the Expo is an interesting example of the 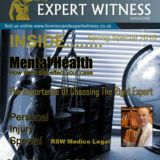 Federation of Forensic and Expert Witnesses

More from Federation of Forensic and Expert Witnesses