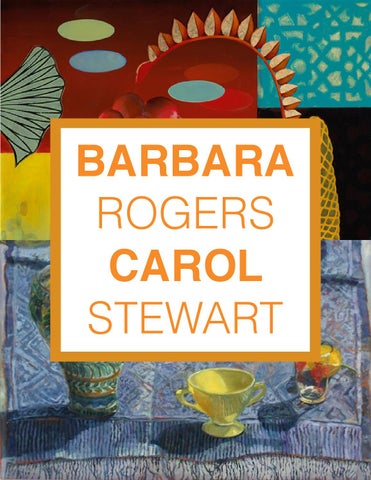 “Through my paintings, I am reclaiming a space for beauty in the midst of everyday life; I seek to create a place of respite, reflection, and contemplation.” - Barbara Rogers Barbara Rogers came of age as an artist in California in the 1960s at the height of the Bay Area Figurative Movement. Richard Diebenkorn, Elmer Bishchoff, and Nathan Olivera, First Generation artists of this movement, were Roger’s teachers. Rogers subsequently taught at the University of California, Berkley and the San Francisco Art Institute, before relocating to Tucson, Arizona in 1990 where she is Professor Emeritus of Painting and Drawing at the University of Arizona. Influenced by the colors, shapes, and forms of the desert, the history of ornament and botany, Rogers allows nature and beauty to be center stage of her canvases. She has said that she paints “as a way to transcend daily life, to evoke the sublime, to reaffirm the existence of beauty and the critical importance of cherishing the earth.” Rogers improvises and departs from the representational accuracy of her botanical surroundings and instead delves into her own psyche, exaggerating, distilling and simplifying the structures of nature. Each painting is realized through continual changes in texture, form and color as she seeks a universal visual language that is innovative and new. In 2013 Barbara Roger’s oeuvre was the subject of a major book, The Imperative of Beauty. At the same time, the Tucson Museum of Art organized a corresponding, fifty-year retrospective exhibition. Barbara Rogers has had over 43 solo exhibitions at museums and galleries in San Francisco, New York, Seattle, Chicago, Germany, South Korea, the United Arab Emirates and is included in numerous public and private collections. She has worked as a faculty member or visiting artist at several universities including the: University of California, Berkeley, CA; University of Chicago; The San Francisco Art Institute; Cooper Union; Pusan National University, Pusan, South Korea; and Zayed University in Adu Dhabi.

“I’m interested in the abstract elements of the art work as much as the subject matter. My still life paintings are not still. I feel that my paintings are lasting over time and invite repeated exploration.” - Carol Stewart Carol Stewart has made the genre of still life and garden the primary subject of her paintings for more than 30 years. Inspired by the interaction of light and shadow that illuminates her tabletop arrangements of flowers, fruit, and transparent glass; Stewart paints directly from observation creating a record of the rhythm of daily life. Characterized by layered color fields of intense mark making, Stewart’s paintings have an energy balanced on the edge between representation and abstraction. Originally from Ontario, Canada, Stewart received her M.F.A. in painting at Fontbonne University in St. Louis, Missouri where she lived for two decades before recently relocating to Columbus, Ohio. Stewart’s work can be found in private and corporate collections in Canada, the United States and the United Kingdom including the Daum Museum of Contemporary Art, Sedalia, MO; Beechgrove Children’s Centre, Kingston, Ontario; The Center for Advanced Medicine, Washington University, St. Louis, MO; Delta Hotels, Toronto, Ontario; Glaxo Canada Inc. Corporate Collection, among others.