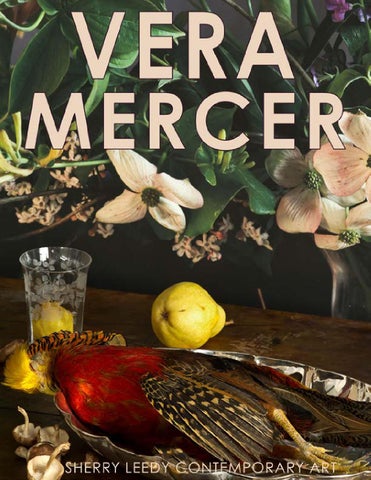 As elegant and dramatic as a 17th Century Flemish painting, yet contemporary in every sense, the opulent and baroque inspired Still Life Photographs of Vera Mercer are grounded in an omnivore’s sense of food and nourishment in its most direct form. The actors on Mercer’s meticulously composed stage are fish and fowl, fruits and vegetables, silver, crystal, flowers and game. Mercer uses a large format, 8 x 10 film camera and sophisticated digital printing technology in the making of her highly detailed tableaus of sumptuously laid tables. The work’s extreme scale, sensuous lighting and daring compositions seem closely related to monumental painting. Vera Mercer was born in Berlin in 1936. She credits her father, Franz Mertz - a well known theater set designer, as her most important influence. Her career as an artist began in the late 1950’s when she and first husband, Daniel Spoerri, moved to Paris and became part of the inner circle of artists, now known as the Nouveaux Realistes. Mercer has said of her time in Paris, “It was a very interesting period for me, and because painters and sculptors need photographers, it was completely normal when Jean Tinguely asked me to begin with his sculptures, to take up and continue photography. It seemed also to have something to do with theater.” Mercer took her first photographs of food in the legendary Paris marketplace, Les Halles, just prior to its demolition. The Les Halles images show the raw material of the butcher’s culture that produced the gourmet dinners served in elegant Parisian restaurants. This theme continues to resonate in Mercer’s photographs today. In 1970, Mercer moved to the United States and with her second husband, Mark, established several world-class restaurants in Omaha, Nebraska - including the French Café, V. Mertz, La Buvette, and the Boiler Room. The Mercer’s are credited with helping to preserve and transform Omaha’s historic Old Market into the thriving community it is today. Vera Mercer maintains a studio in Omaha, Nebraska and Paris, France and exhibits frequently in Europe, Japan, Mexico, China and the United States.

All photographs are available in three sizes. Prices increase as the edition sells. Large: Edition of 3 Medium: Edition of 6 Small: Edition of 10 Dimensions Vary