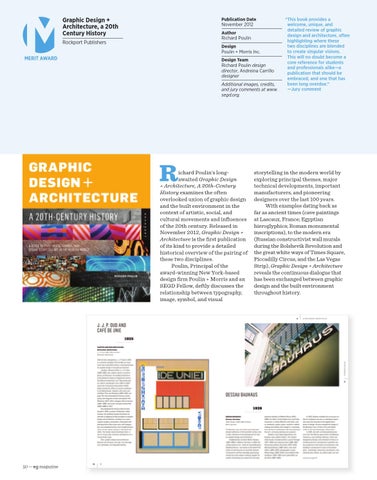 ichard Poulin’s longawaited Graphic Design + Architecture, A 20th-Century History examines the often overlooked union of graphic design and the built environment in the context of artistic, social, and cultural movements and influences of the 20th century. Released in November 2012, Graphic Design + Architecture is the first publication of its kind to provide a detailed historical overview of the pairing of these two disciplines. Poulin, Principal of the award-winning New York-based design firm Poulin + Morris and an SEGD Fellow, deftly discusses the relationship between typography, image, symbol, and visual

“ This book provides a welcome, unique, and detailed review of graphic design and architecture, often highlighting where these two disciplines are blended to create singular visions. This will no doubt become a core reference for students and professionals alike—a publication that should be embraced, and one that has been long overdue.” —Jury comment

storytelling in the modern world by exploring principal themes, major technical developments, important manufacturers, and pioneering designers over the last 100 years. With examples dating back as far as ancient times (cave paintings at Lascaux, France; Egyptian hieroglyphics; Roman monumental inscriptions), to the modern era (Russian constructivist wall murals during the Bolshevik Revolution and the great white ways of Times Square, Piccadilly Circus, and the Las Vegas Strip), Graphic Design + Architecture reveals the continuous dialogue that has been exchanged between graphic design and the built environment throughout history.

eg is the magazine of choice for creative professionals working at the intersection of communication design and the built environment.