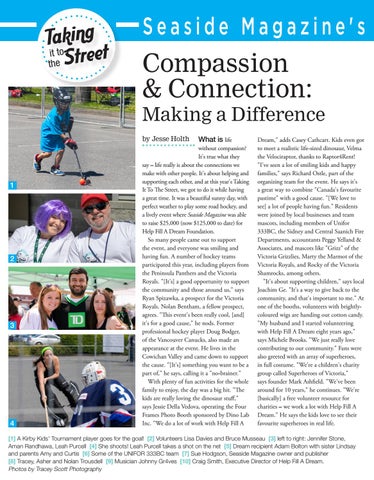 Making a Difference What is life without compassion? It&#39;s true what they say â&amp;#x20AC;&amp;#x201C; life really is about the connections we make with other people. It&#39;s about helping and supporting each other, and at this year&#39;s Taking It To The Street, we got to do it while having a great time. It was a beautiful sunny day, with perfect weather to play some road hockey, and a lively event where Seaside Magazine was able to raise $25,000 (now $125,000 to date) for Help Fill A Dream Foundation. So many people came out to support the event, and everyone was smiling and having fun. A number of hockey teams participated this year, including players from the Peninsula Panthers and the Victoria Royals. &quot;[It&#39;s] a good opportunity to support the community and those around us,&quot; says Ryan Spizawka, a prospect for the Victoria Royals. Nolan Bentham, a fellow prospect, agrees. &quot;This event&#39;s been really cool, [and] it&#39;s for a good cause,&quot; he nods. Former professional hockey player Doug Bodger, of the Vancouver Canucks, also made an appearance at the event. He lives in the Cowichan Valley and came down to support the cause. &quot;[It&#39;s] something you want to be a part of,&quot; he says, calling it a &quot;no-brainer.&quot; With plenty of fun activities for the whole family to enjoy, the day was a big hit. &quot;The kids are really loving the dinosaur stuff,&quot; says Jessie Della Vedova, operating the Four Frames Photo Booth sponsored by Dino Lab Inc. &quot;We do a lot of work with Help Fill A by Jesse Holth

Dream,&quot; adds Casey Cathcart. Kids even got to meet a realistic life-sized dinosaur, Velma the Velociraptor, thanks to Raptor4Rent! &quot;I&#39;ve seen a lot of smiling kids and happy families,&quot; says Richard Ostle, part of the organizing team for the event. He says it&#39;s a great way to combine &quot;Canada&#39;s favourite pastime&quot; with a good cause. &quot;[We love to see] a lot of people having fun.&quot; Residents were joined by local businesses and team mascots, including members of Unifor 333BC, the Sidney and Central Saanich Fire Departments, accountants Peggy Yelland &amp; Associates, and mascots like &quot;Grizz&quot; of the Victoria Grizzlies, Marty the Marmot of the Victoria Royals, and Rocky of the Victoria Shamrocks, among others. &quot;It&#39;s about supporting children,&quot; says local Joachim Ge. &quot;It&#39;s a way to give back to the community, and that&#39;s important to me.&quot; At one of the booths, volunteers with brightlycoloured wigs are handing out cotton candy. &quot;My husband and I started volunteering with Help Fill A Dream eight years ago,&quot; says Michele Brooks. &quot;We just really love contributing to our community.&quot; Fans were also greeted with an array of superheroes, in full costume. &quot;We&#39;re a children&#39;s charity group called Superheroes of Victoria,&quot; says founder Mark Ashfield. &quot;We&#39;ve been around for 10 years,&quot; he continues. &quot;We&#39;re [basically] a free volunteer resource for charities â&amp;#x20AC;&amp;#x201C; we work a lot with Help Fill A Dream.&quot; He says the kids love to see their favourite superheroes in real life.

Think of our publication as an extra dimension of our community space, a place where the voice of the Saanich Peninsula is treasured and celebrated