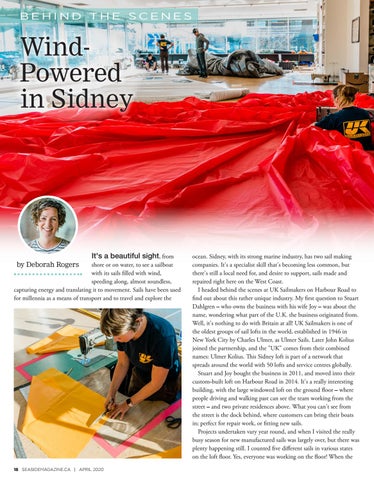 It&#39;s a beautiful sight, from shore or on water, to see a sailboat with its sails filled with wind, speeding along, almost soundless, capturing energy and translating it to movement. Sails have been used for millennia as a means of transport and to travel and explore the by Deborah Rogers

ocean. Sidney, with its strong marine industry, has two sail making companies. It&#39;s a specialist skill that&#39;s becoming less common, but there&#39;s still a local need for, and desire to support, sails made and repaired right here on the West Coast. I headed behind the scenes at UK Sailmakers on Harbour Road to find out about this rather unique industry. My first question to Stuart Dahlgren – who owns the business with his wife Joy – was about the name, wondering what part of the U.K. the business originated from. Well, it&#39;s nothing to do with Britain at all! UK Sailmakers is one of the oldest groups of sail lofts in the world, established in 1946 in New York City by Charles Ulmer, as Ulmer Sails. Later John Kolius joined the partnership, and the &quot;UK&quot; comes from their combined names: Ulmer Kolius. This Sidney loft is part of a network that spreads around the world with 50 lofts and service centres globally. Stuart and Joy bought the business in 2011, and moved into their custom-built loft on Harbour Road in 2014. It&#39;s a really interesting building, with the large windowed loft on the ground floor – where people driving and walking past can see the team working from the street – and two private residences above. What you can&#39;t see from the street is the dock behind, where customers can bring their boats in; perfect for repair work, or fitting new sails. Projects undertaken vary year round, and when I visited the really busy season for new manufactured sails was largely over, but there was plenty happening still. I counted five different sails in various states on the loft floor. Yes, everyone was working on the floor! When the

Think of our publication as an extra dimension of our community space, a place where the voice of the Saanich Peninsula is treasured and celebrated.