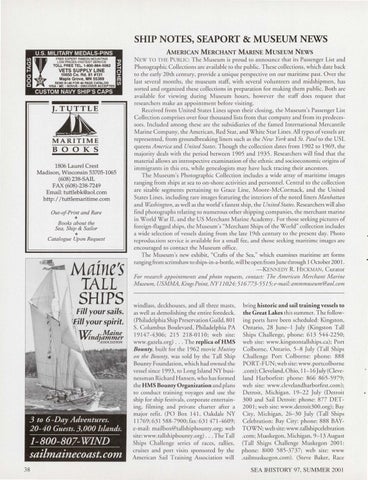 AMERICAN MERCHANT MARINE MUSEUM NEWS NEW TO TH E PUBLIC: The Museum is proud to announce char irs Passenger List and Photographic Collections are available to the public. These collections, which date back to the early 20th century, provide a unique perspective on our maritime past. Over the last several months, the museum staff, wirh several volunteers and midshipmen, has sorted and organized these collections in preparation for making them public. Both are available for viewing during Museum hours, however rhe staff does request that researchers make an appointment before visiting. Received from United States Lines upon rheir closing, the Museum's Passenger List Collection comprises over four thousand lists from that company and from its predecessors. Included among these are rhe subsidiaries of rhe famed Internacional Mercantile Marine Company, rhe American, Red Star, and White Star Lines. All rypes of vessels are represented, from groundbreaking liners such as the New York and St. Paul to the USL queens America and United States. Though the collection dates from 1902 to 1969, the majoriry deals with the period between 1905 and 1935. Researchers will find that the material allows an introspective examination of the ethnic and socioeconomic origins of immigrants in chis era, while genealogists may have luck tracing their ancestors. The Museum's Photographic Collection includes a wide array of maritime images ranging from ships at sea to on-shore activities and personnel. Central to the collection are sizable segments pertaining to Grace Line, Moore-McCormack, and the United Scates Lines, including rare images featuring the interiors of the noted liners Manhattan and Washington , as well as rhe world's fastest ship, rhe United States. Researchers will also find photographs relating to numerous other shipping companies, rhe merchanr marine in World War II, and the US Merchant Marine Academy. For those seeking pictures of foreign-flagged ships, the Museum 's "Merchant Ships of the World" collection includes a wide selection of vessels dating from rhe lace l 9rh century to rhe present day. Photo repruJuction service is available for a small fee, and chose seeking maririmc images are encouraged to conracr the Museum office. The Museum's new exhibit, "Crafts of the Sea," which examines maritime art forms ranging from scrimshaw co ships-in-a-boccie, will be open from June through 1 October 2001. -KENNEDY R. HICKMAN, Curator For research appointments and photo requests, contact: The American Merchant Marine Museum, USMMA, Kings Point, NY 11024; 516173-5 515; e-mail: ammmuseum@aol.com