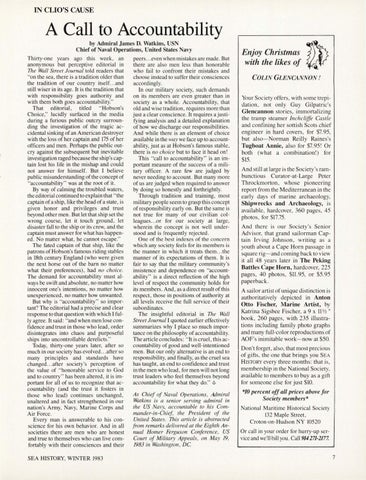 A Call to Accountability by Admiral James D. Watkins, USN Chief of Naval Operations, United States Navy Thirty-one years ago this week, an anonymous but perceptive edito rial in The Wall Szreet Journal told readers that "on the sea, there is a tradition older than the tradition of our country itself. .. and still wiser in its age. It is the tradition that with responsibility goes authority and with them both goes accountability." That editorial , titled " Hobson's Choice," lucidly surfaced in the media during a furious public outcry surrounding the investigation of the trag ic accidental sinking of an American destroyer with the loss of her captain and 175 of her offi cers and men . Perhaps the public outcry against the subsequent but inevitable investigation raged because the ship's captain lost his life in the mishap and could not answer for himself. But I believe public misunderstanding of the concept of "accountability" was at the root of it. By way of calming the troubled waters, the editorial continued to explain that " the captain of a ship, like the head of a state, is given honor and privileges and trust beyond other men. But let that ship set the wrong course, let it touch g round , let disaster fall to the ship or its crew, and the capta in must answer for what has happened . No matter what , he cannot escape." The fated captain of that ship, like the patrons ofHobson's fam ous riding stables in 18th century England (who were given the next horse out of the barn no matter what their preferences) , had no choice. The demand for accountability must always be swift and absolute, no matter how innocent one's intentions, no matter how unexperienced , no matter how unwanted . But why is "accountabil ity " so impo rtant? The editorial had a precise and clear res ponse to that question with which I fu lly ag ree. It said : "and when men lose confid ence and trust in those who lead , order disintegrates into chaos and purposeful ships into uncontrollable derelicts." Today, thirty-one yea rs later, afte r so much in our society has evolved .. .after so many principles and standards have changed ... after society's perception of the value of " hono rable service to God and to country" has been alte red , it is important fo r all of us to recognize that accountability (and the trust it fos ters in those who lead) continues unchanged , unalte red and in fact strengthened in our nation's Army, Navy, Marine Corps and Air Force. Every man is answerable to his conscience fo r his own behavior. And in all soc ieties there are men who are honest and true to themselves who can live comfo rtably with their consciences and their SEA HISTORY, WINTER 1983

peers ... even when mistakes are made. But there are also men less than honorable who fa il to confro nt their mistakes and choose instead to suffer their consciences accordingly. In our military society, such demands on its members are even greate r than in society as a whole. Accountability, that old and wise tradition, requ ires more than just a clear conscience. It requires a justifyi ng analysis and a detailed explanation of how we discharge our responsibilities. And while there is an element of cho ice available in the way we face up to accountability, just as at Hobson's famous stable, there is no choice but to face it head on! This "call to accountability" is an important measure of the success of a military officer. A rare few are j udged by never needing to account. But ma ny more of us are j udged when requi red to answer by doing so honestly and fo rthrightl y. Through trad ition and tra ining, most military people seem to gras p this concept of responsibility earl y on. But the same is not true fo r many of our civilian colleagues ... o r for our society at large, wherein the concept is not well understood and is frequentl y rejected. One of the best indexes of the concern which any society fee ls fo r its members is the manner in which it treats them . .. the manner of its expectations of them . It is fa ir to say that the military community's insistence and dependence on "accountabil ity" is a direct reflection of the high level of respect the community holds fo r its members. And , as a direct result of this respect, those in positions of autho rity at all levels receive the full service of their subordinates. The insightful editorial in The Wall Street Journal I quoted earlier effecti vely summarizes why I place so much importance on the philosophy of accountability. Thearticle concludes : " It is cruel, this accountability of good and well -intentioned men. But our o nl y alternati ve is an end to responsibility, and fin all y, as the cruel sea has taught , an end to confidence and trust in the men who lead , fo r men will not long trust leaders who feel themselves beyond accountability for what they do." '1i

As Chief of Na val Operations, Admiral Watkins is a senior serving admiral in zhe US Navy, accountable to his Commander-in-Chief, the President of the United States. This article is abstracted from remarks deli vered at the Eighth Annual Homer Ferguson Confe rence, US Court of Military Appeals, on May 19, 1983 in Washington, DC.

Enjoy Christmas with the likes of

Your Soc iety offe rs, w ith some trepi datio n , not onl y Guy Gilpatric's Glencannon sto ries, immo rtalizing the tramp steame r ln chclijfe Castle and confi ning he r sottish Scots chief e ngineer in ha rd covers, for $7. 95, but also- No rma n Re illy Raines's Tugboat Annie, also for $7.95! Or bo th (what a combination! ) fo r $15. And still at large is the Society 's rambunctio us Curato r-at-Large Pete r Th roc kmo rton , whose pioneering repo rt from the Medite rranean in the earl y days of ma rine archaeology, Shipwrecks and Archaeology, is available, hardcover, 360 pages, 45 photos , fo r $17.75. And the re is o ur Soc iety's Senio r Ad visor, that g rand sailorman Captai n Irving Johnson , writing as a youth abo ut a Cape Ho rn passage in squa re rig-and coming back to view it all 48 years late r in The Peking Battles Cape Horn, hardcover, 225 pages, 40 photos, $11 . 95, o r $5. 95 pape rbac k. A sailo r a rti st ofuniqu e di stinctio n is authoritati vely depicted in Anton Otto Fisch er, Marine Artist, by Katrina Sigs bee Fi scher, a 9 x ll 1h " book, 260 pages, with 235 illustratio ns including famil y photo graphs and ma ny full -color reproductio ns of AO F's inimitable wo rk- now at $50. Don't fo rget, also, that most precio us of gifts, the one that brings yo u SEA HIS1DRY every three months: that is, me mbe rship in the National Society, available to me mbe rs to buy as a g ift for someone else for just $10.