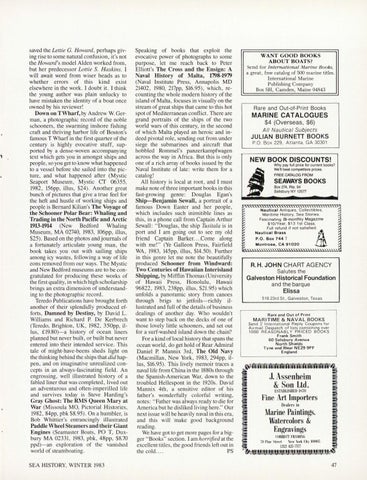 saved the Lettie G. Howard, perhaps giving rise to some natural confusion , it's not the Howard's model Alden worked from, but her predecessor Lottie S. Haskins. I will await word from wiser heads as to whether errors of this kind exist elsewhere in the work. I doubt it. I think the young author was plain unlucky to have mistaken the identity of a boat once owned by his reviewer! Down on TWharf, by Andrew W. German , a photographic record of the noble schooners, the swarming inshore fishing craft and thriving harbor life of Boston's famous T Wharf in the first quarter of the century is highly evocative stuff, supported by a dense-woven accompanying text which gets you in amongst ships and people, so you get to know what happened to a vessel before she sailed into the picture, and what happened after (Mystic Seaport Museum, Mystic CT 06355, 1982 , 156pp, illus, $24). Another great bunch of pictures that give a true feel for the heft and hustle of working ships and people is Bernard Kilian's The Voyage of the Schooner Polar Bear: Whaling and Trading in the North Pacific and Arctic 1913-1914 (New Bedford Whaling Museum, MA 02740, 1983, 106pp, illus, $25). Based on the photos and journals of a fortunately articulate young man, the book takes you out with sailing ships among icy wastes, following a way of life eons removed from our ways. The Mystic and New Bedford museums are to be congratulated for producing these works of the first quality, in which high scholarship brings an extra dimension of understanding to the photographic record. Teredo Publications have brought forth another of their splendidly produced efforts, Damned by Destiny, by David L. Williams and Richard P. De Kerbrech (Teredo, Brighton, UK, 1982, 350pp, illus, £19.80)-a history of ocean liners planned but never built, or built but never entered into their intended service. This tale of might-have-beens sheds light on the thinking behind the ships that did happen, and on imaginative unrealized concepts in an always-fascinating field. An engrossing , well illustrated history of a fabled liner that was completed , lived out an adventurous and often-imperilled life and survives today is Steve Harding's Gray Ghost: The RMS Queen Mary at War (Missoula MO, Pictorial Histories , 1982, 84pp, pbk $8.95) . On a humbler, is Bob Whittier's entrancingly illustrated Paddle Wheel Steamers and their Giant Engines (Seamaster Boats, PO T, Duxbury MA 02331, 1983, pbk, 48pp, $8.70 ppd)-an exploration of the vanished world of steamboating. SEA HISTORY, WINTER 1983

Speaking of books that exploit the evocative power of photographs to some purpose, let me reach back to Peter Elliott's The Cross and the Ensign: A Naval History of Malta, 1798-1979 (Naval Institute Press, Annapolis MD 21402, 1980, 217pp, $16.95), which , recounting the whole modern history of the island of Malta, focuses in visually on the stream of great ships that came to this hot spot of Mediterranean conflict. There are grand portraits of the ships of the two world wars of this century, in the second of which Malta played an heroic and indeed pivotal role, sending out from under siege the submarines and aircraft that hobbled Rommel's panzerkampfwagen across the way in Africa. But this is only one of a rich array of books issued by the Naval Institute of late: write them for a catalog! All history is local at root, and I must make note of three important books in this fast-growing genre : Douglas Egan's Ship-Benjamin Sewall, a portrait of a famous Down Easter and her people, which includes such inimitible lines as this , in a phone call from Captain Arthur Sewall: "Douglas, the ship Tusitala is in port and I am going out to see my old friend Captain Barker. ...Come along with me!" (Ye Galleon Press, Fairfield WA , 1983, 145pp, illus , $14.50) . Further in this genre let me note the beautifully produced Schooner from Windward: Two Centuries of Hawaiian Interisland Shipping, by Mifflin Thomas (University of Hawaii Press, Honolulu , Hawaii 96822, 1983, 238pp, illus, $21.95) which unfolds a panoramic story from canoes through brigs to jetfoils-richly illustrated and full of the details of business dealings of another day. Who wouldn't want to step back on the decks of one of those lovely little schooners, and set out for a surf-washed island down the chain? For a kind oflocal history that spans the ocean world, do get hold of Rear Admiral Daniel P. Mannix 3rd, The Old Navy (Macmillan, New York, 1983, 294pp, illus, $16.95) . This lively memoir traces a naval life from China in the 1880s through the Spanish-American War, down to the troubled Hellespont in the 1920s. David Mannix 4th, a sensitive editor of his father's wonderfully colorful writing, notes : "Father was always ready to die for America but he disliked living here." Our next issue will be heavily naval in this era , and this will ·make good background reading . We have got to get more pages for a bigger "Books" section . I am horrified at the excellent titles, the good friends left out in the cold.... PS