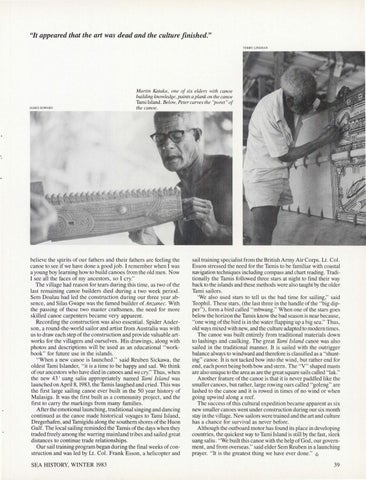 "It appeared that the art was dead and the culture finished." TERRY LI NEHAN

Martin Kataka , one of six elders with canoe building knowledge, paints a plank on the canoe Tami Island. Below, Peter carves th e "porer" of the canoe.

believe the spirits of our fathers and their fathers are feeling the canoe to see if we have done a good job. I remember when I was a young boy learning how to build canoes from the old men . Now I see all the faces of my ancestors, so I cry." The village had reason for tears during this time, as two of the last remaining canoe builders died during a two week period . Sem Doalau had led the construction during our three year absence, and Silas Gwape was the famed builder of Anzanec. With the passing of these two master craftsmen, the need for more skilled canoe carpenters became very apparent. Recording the construction was also essential. Spider Anderson, a round-the-world sailor and artist from Australia was with us to draw each step of the construction and provide valuable artworks for the villagers and ourselves . His drawings, along with photos and descriptions will be used as an educational "workbook" for future use in the islands. "When a new canoe is launched ." said Reuben Sickawa, the oldest Tami Islander, "it is a time to be happy and sad. We think of our ancestors who have died in canoes and we cry." Thus, when the new 43 ' uang saliu appropriately named Tami Island was launched on April 8, 1983, the Tamis laughed and cried. This was the first large sailing canoe ever built in the 50 year histo ry of Malasiga. It was the first built as a community project, and the first to carry the markings from many families. After the emotional launching, traditional singing and dancing continued as the canoe made historical voyages to Tami Island, Dregerhafen, and Tamigidu along the southern shores of the Huon Gulf. The local sailing reminded the Tamis of the days when they traded freely among the warring mainland tribes and sailed great distances to continue trade relationships. Our sail training program began during the final weeks of construction and was led by Lt. Col. Frank Esson , a helicopter and SEA HISTORY, WINTER 1983

sail training specialist from the British Army Air Corps. Lt. Col . Esson stressed the need for the Tamis to be familiar with coastal navigation techniques including compass and chart reading. Traditionally the Tamis followed three stars at night to find their way back to the islands and these methods were also taught by the older Tami sailors. 'We also used stars to tell us the bad time for sailing," said Teophil. These stars, (the last three in the handle of the "big dipper"), form a bird called " mbwang." When one of the stars goes below the horizon the Tamis know the bad season is near because, "one wing of the bird is in the water flapping up a big sea." Thus, old ways mixed with new, and the culture adapted to modem times. The canoe was built entirely from traditional materials down to lashings and caulking. The great Tami Island canoe was also sailed in the traditional manner. It is sailed with the outrigger balance always to windward and therefore is classified as a "shunting" canoe. It is not tacked bow into the wind , but rather end for end , each poret being both bow and stern. The "V" shaped masts are also unique to the area as are the great square sails called " lak." Another feature of the canoe is that it is never paddled like the smaller canoes, but rather, large rowing oars called "goleng" are lashed to the canoe and it is rowed in times of no wind or when going upwind along a reef. The success of this cultural expedition became apparent as six new smaller canoes went under construction during our six month stay in the village. New sailors were trained and the art and culture has a chance for survival as never before. Although the outboard motor has found its place in developing countries, the quickest way to Tami Island is still by the fast, sleek uang saliu. "We built this canoe with the help of God, our government, and from overseas." said elder Sem Reuben in a launching prayer. "It is the greatest thing we have ever done." .i, 39