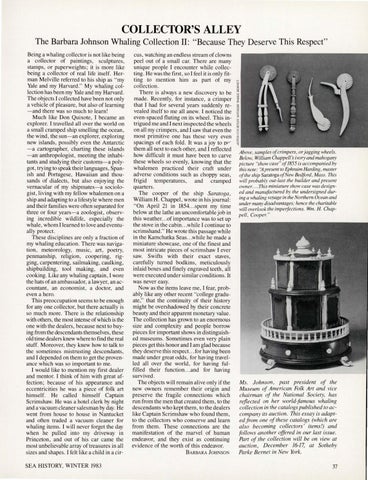 COLLECTOR'S ALLEY The Barbara Johnson Whaling Collection II: "Because They Deserve This Respect" Being a whaling collector is not like being a collector of paintings, sculptures, stamps, or paperweights; it is more like being a collector of real life itself. Herman Melville referred to his ship as "my Yale and my Harvard ." My whaling collection has been my Yale and my Harvard . The objects I collected have been not only a vehicle of pleasure, but also of learning -and there was so much to learn! Much like Don Quixote, I became an explorer. I travelled all over the world on a small cramped ship smelling the ocean, the wind , the sun-an explorer, exploring new islands, poss ibly even the Antarctic -a cartographer, charting these islands -an-anthropologist , meeting the inhabitants and studying their customs-a polygot, trying to speak their languages, Spanish and Portugese, Hawaiian and thousands of dialects , but also enjoying the vernacular of my shipmates-a sociologist, living with my fellow whalemen on a ship and adapting to a lifestyle where men and their families were often separated for three or four years-a zoologist, observing incredible wildlife, especially the whale, whom I learned to love and eventually protect. These disciplines are only a fraction of my whaling education. There was navigation , meteorology, music, art, poetry, penmanship, religion , coopering, rigging, carpentering, sailmaking, caulking, shipbuilding, tool making, and even cooking. Like any whaling captain, I wore the hats of an ambassador, a lawyer, an accountant , an economist, a doctor, and even a hero. This preoccupation seems to be enough for any one collector, but there actually is so much more. There is the relationship with others, the most intense of which is the one with the dealers, because next to buying from the descendants themselves, these old time dealers knew where to find the real stuff. Moreover, they knew how to talk to the sometimes mistrusting descendants, and I depended on them to get the provenance which was so important to me. I would like to mention my first dealer and mentor. I think of him with great affection ; because of his appearance and eccentricities he was a piece of folk art himself. He called himself Captain Scrimshaw. He was a hotel clerk by night and a vacuum cleaner salesman by day. He went from house to house in Nantucket and often traded a vac uum cleaner for whal ing items . I will never forget the day when he pulled into my driveway in Princeton , and out of his car came the most unbelievable array of treasures in all sizes and shapes. I felt like a child in a cirSEA HIS1DRY, WINTER 1983

cus, watching an endless stream of clowns peel out of a small car. There are many unique people I encounter while collecting. He was the first , so I feel it is only fitting to mention him as part of my collection . There is always a new discovery to be made. Recently, for instance, a crimper that I had for several years suddenly revealed itself to me all anew. I noticed the even-spaced fluting on its wheel . This intrigued me and I next inspected the wheels on all my crimpers , and I saw that even the most primitive one has these very even spacings of each fold. It was a joy to P" ' them all next to each other, and I reflected how difficult it must have been to carve these wheels so evenly, knowing that the whalemen practiced their craft under adverse conditions such as choppy seas, frigid temperatures, and cramped quarters. The cooper of the ship Saratoga , William H . Chappel, wrote in his journal : " On April 21 in 1854 ... spent my time below at the lathe an uncomfortable job in this weather. .. of importance was to set up the stove in the cabin .. .while I continue to scrimshand ." He wrote this passage while in the Kamchatka Seas ...while he made a miniature showcase, one of the finest and most intricate pieces of scrimshaw I ever saw. Swifts with their exact staves, carefully turned bodkins, meticulously inlaid boxes and finely engraved teeth , all were executed under similar conditions. It was never easy. Now as the items leave me, I fear, probably like any other recent "college graduate,'' that the continuity of their history might be overshadowed by their concrete beauty and their apparent monetary value. The collection has grown to an enormous size and complexity and people borrow pieces for important shows in distinguished museums . Sometimes even very plain pieces get this honor and I am glad because they deserve this respect ... for having been made under great odds, for having travelled all over the world , for having fulfilled their function ... and for having survived. The objects will remain alive only ifthe new owners remember their origin and preserve the fragile connections which run from the men that created them , to the descendants who kept them , to the dealers like Captain Scrimshaw who found them , to the collectors who conserve and learn from them . These connections are the manifestation of the marvel of human endeavor, and they ex ist as continuing evidence of the worth of this endeavor. B ARBARA JOHNSON

~ Above, samples of crimpers, or jagging wheels. Below, William Chappell'sivoryandmahogany picture "show case" of 1855 is accompanied by this note: 'it present to Ephraim Harding, master ofthe ship Saratoga ofNew Bedford, Mass. This will probably out-last the builder and present owner... .This miniature show case was designed and manufactured by the undersigned during a whaling voyage in the Northern Ocean and under many disadvantages; hence the charitable will overlook the imperfections. Wm. H. Chappell, Cooper."

Ms. Johnson, past president of the Museum of American Folk Art and vice chairman of the National Society, has reflected on her world-famous whaling collection in the catalogs published to accompany its auction. This essay is adapted from one of these catalogs (which are also becoming collectors' items!) and follows another offered in our last issue. Part of the collection will be on view at auction, December 16-17, at Sotheby Parke Bernet in New York.