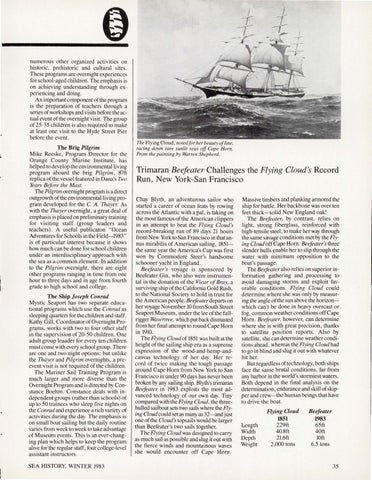 -. numerous other organized activities on historic, prehistoric and cultural sites. These programs are overnight experiences for school-aged children . The emphasis is on achieving understanding through experiencing and doing. An important component of the program is the preparation of teachers through a series of workshops and visits before the actual event of the overnight visit. The group of25-35 children is also required to make at least one visit to the Hyde Street Pier before the event .

The Brig Pilgrim Mike Reeske, Program Director for the Orange County Marine Institute, has helped to develop the environmental living program aboard the brig Pilgrim , 87ft rep I ica of the vessel featured in Dana's Two >ears Before the Mast. The Pilgrim overnight program is a direct outgrowth of the environmental living program developed for the C. A. Thayer. As with the Thayer overnight , a great deal of emphasis is placed on preliminary training for visiting staff (group Âˇleaders and teachers) . A useful publicaton "Ocean Adventures for Schools in the Field- 1983" is of particular interest because it shows how much can be done for school children under an interdisciplinary approach with the sea as a common element. In addition to the Pilgrim overnight , there are eight other programs ranging in time from one hour to three days and in age from fourth grade to high school and college.

The Ship Joseph Conrad Mystic Seaport has two separate educational programs which use the Conrad as sleeping quarters for the children and staff. Kathy Gill, Coordinator of Overnight Programs, works with two to four other staff in the supervision of20-50 children . One adult group leaader for every ten children must come with every school group. There are one and two night options ; but unlike the Thayer and Pilgrim overnights, a preevent visit is not required of the children. The Mariner Sail Training Program is much larger and more diverse than the Overnight Program and is directed by Constance Boehm. Constance deals with independent groups (rather than schools) of up to 50 trainees who sleep five nights on the Conrad and experience a rich variety of activities during the day. The emphasis is on small boat sailing but the daily routine varies from week to week to take advantage of Museum events . This is an ever-changing plan which helps to keep the program alive for the regular staff, four college-level assistant instructors. SEA HISTORY, WINTER 1983

7he Flying Cloud, noted for her beauty of line, racing down rare sunlit seas off Cape Horn. From the painting by Warren Shepherd.

Trimaran Beefeater Challenges the Flying Cloud's Record Run, New York-San Francisco Chay Blyth , an adventurous sailor who started a career of ocean feats by rowing across the Atlantic with a pal , is taking on the most famous of the American clippers in an attempt to beat the Flying Cloud's record-breaking run of 89 days 21 hours from New York to San Francisco in that annus mirabilis of American sailing, 1851the same year the America's Cup was first won by Commodore Steer's handsome schooner yacht in England. Beefeater's voyage is sponsored by Beefeater Gin , who also were instrumental in the donation of the Vicar of Bray, a surviving ship of the California Gold Rush, to the National Society to hold in trust for the American people. Beefeater departs on her voyage November JO from South Street Seaport Museum , under the lee of the fullrigger 11izvertree, which put back dis masted from her final attempt to round Cape Horn in 1910. The Flying Cloud of 1851 was built at the height of the sailing ship era as a supreme expression of the wood-and-hemp-andcanvas technology of her day. Her record of twice making the tough passage around Cape Horn from New York to San Francisco in under 90 days has never been broken by any sailing ship. Blyth's trimaran Beefeater in 1983 exploits the most advanced technology of our own day. Tiny compared with the Flying Cloud, the threehulled sailboat sets two sails where the Flying Cloud could set as many as 32- and just one of the Cloud's topsails would be larger than Beefeater's two sails together. The Flying Cloud was designed to carry as much sail as possible and slug it out with the fierce winds and mountainous waves she would encounter off Cape Horn.

Massive timbers and planking armored the ship for battle. Her backbone was over ten feet thick-solid New England oak! The Beefeater, by contrast , relies on light, strong fiberglass , reinforced with high-tensile steel, to make her way through the same savage conditions met by the Flying Cloud off Cape Horn . Beefeater's three slender hulls enable her to slip through the water with minimum opposition to the boat's passage. The Beefeater also relies on superior information gathering and processing to avoid damaging storms and exploit favorable conditions. Flying Cloud could determine where she was only by measuring the angle of the sun above the horizonwhich can't be done in heavy overcast or fog , common weather conditions off Cape Horn . Beefeater, however, can determine where she is with great precision , thanks to satellite position reports. Also by satellite, she can determine weather conditions ahead , whereas the Flying Cloud had to go in blind and slug it out with whatever hit her. But regardless of technology, both ships face the same brutal conditions, far from any harbor in the world's stormiest waters. Both depend in the final analysis on the determination, endurance and skill of skipper and crew- the human beings that have to drive the boat.