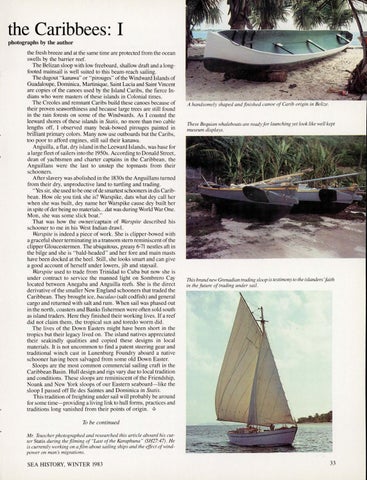 the Caribbees: I photographs by the author the fresh breeze and at the same time are protected from the ocean swells by the barrier reef. The Belizan sloop with low freeboard , shallow draft and a longfooted mainsail is well suited to this beam-reach sailing. The dugout " kanawa" or " pirouges" of the Windward Islands of Guadaloupe, Dominica, Martinique, Saint Lucia and Saint Vincent are copies of the canoes used by the Island Caribs, the fierce Indians who were masters of these islands in Colonial times. The Creoles and remnant Caribs build these canoes because of their proven seaworthiness and because large trees are still found in the rain forests on some of the Windwards. As I coasted the leeward shores of these islands in Statis, no more than two cable lengths off, I observed many beak-bowed pirouges painted in brilliant primary colors. Many now use outboards but the Caribs, too poor to afford engines, still sail their kanawa. Anguilla , a flat , dry island in the Leeward Islands, was base for a large fleet of sailers into the 1950s. According to Donald Street, dean of yachtsmen and charter captains in the Caribbean , the Anguillans were the last to unstep the topmasts from their schooners. After slavery was abolished in the 1830s the Anguillans turned from their dry, unproductive land to turtling and trading. " Yes sir, she used to be one of de smartest schooners in dis Caribbean. How ole you tink she is? Warspike, dats what dey call her when she was built , dey name her Warspike cause dey built her in spite of der being no materials .. .dat was during World War One. Mon, she was some slick boat ." That was how the owner/captain of Warspite described his schooner to me in his West Indian drawl. Warspite is indeed a piece of work. She is clipper-bowed with a graceful sheer terminating in a transom stern reminiscent of the clipper Gloucestermen. The ubiquitous, greasy 6-71 nestles aft in the bilge and she is " bald-headed " and her fore and main masts have been docked at the heel. Still , she looks smart and can give a good account of herself under lowers, jib and staysail. Warspite used to trade from Trinidad to Cuba but now she is under contract to service the manned light on Sombrero Cay located between Anegaba and Anguilla reefs. She is the direct derivative of the smaller New England schooners that traded the Caribbean. They brought ice, bacalao (salt codfish) and general cargo and returned wi th salt and rum. When sai l was phased out in the north, coasters and Banks fishermen were often sold south as island traders. Here they finished their working lives. If a reef did not claim them , the tropical sun and toredo worm did . The lives of the Down Easters might have been short in the tropics but their legacy lived on . The island natives appreciated their seakindly qualities and copied these designs in local materials. It is not uncommon to find a patent steering gear and traditional winch cast in Lunenburg Foundry aboard a native schooner having been salvaged from some old Down Easter. Sloops are the most common commercial sailing craft in the Caribbean Basin. Hull design and rigs vary due to local tradition and conditions. These sloops are reminiscent of the Friendship, Noank and New York sloops of our Eastern seaboard- like the sloop I passed off Ile des Saintes and Dominica in Statis. This tradition of freighting under sail will probably be around for some time- providing a living link to hull forms , practices and traditions long vanished from their points of origin. Ji

A handsomely shaped and finish ed canoe of Carib origin in Belize.

This brand new Grenadian trading sloop is testimony to the islanders 'faith in the fa.ture of trading under sail.

To be continued Mr. Teuscher photographed and researched this article aboard his cutter Statis during the filming of "Last of the Karaphuna " (SH27:47). He is currently working on a film about sailing ships and the effect of windpower on man 's migrations.