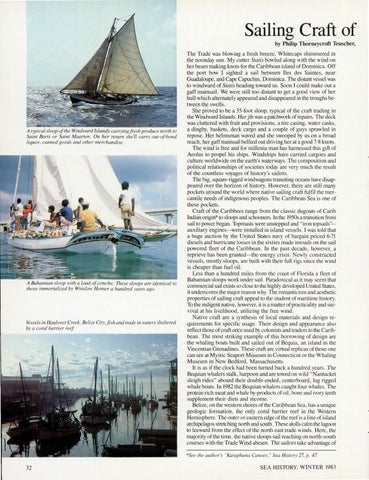 A typical sloop of the Windward Islands carrying fresh produce north to Saint Barrs or Saint Maarren. On her return she'll carry our-ofbond liquor, canned goods and other merchandise.

A Bahamian sloop with a load of conchs. Th ese sloops are identical to those immortalized by Win slow Homer a hundred years ago.

The Trade was blowing a fresh breeze. Whitecaps shimmered in the noonday sun . My cutter Statis bowled along with the wind on her beam making knots for the Caribbean island of Dominica. Off the port bow I sighted a sail between Iles des Saintes, near ' Guadaloupe, and Cape Capuchin , Dominica. The distant vessel was to windward of Statis heading toward us. Soon I could make out a gaff mainsail. We were still too distant to get a good view of her hull which alternately appeared and disappeared in the troughs between the swells. She proved to be a 35-foot sloop, typical of the craft trading in the Windward Islands. Her jib was a patchwork of repairs. The deck was cluttered with fruit and provisions, a tire casing, water casks, a dinghy, baskets, deck cargo and a couple of guys sprawled in repose. Her helmsman waved and she swooped by us on a broad reach , her gaff mainsail bellied out driving her at a good 7-8 knots. The wind is free and for millenia man has harnessed this gift of Aeolus to propel his ships. Windships have carried cargoes and culture worldwide on the earth's waterways . The composition and political relationships of societies today are very much the result of the countless voyages of history 's sailors. The big, square-rigged wind wagons transiting oceans have disappeared over the horizon of history. However, there are still many pockets around the world where native sailing craft fulfil the mercantile needs of indigenous peoples. The Caribbean Sea is one of these pockets. Craft of the Carib bees range from the classic dugouts of Carib Indian origin* to sloops and schooners. In the 1950s a transition from sail to power began . Topmasts were unstepped and " iron topsails':_ auxiliary engines-were installed in island vessels . I was told that a huge auction by the United States navy of bargain priced 6-71 diesels and hurricane losses in the sixties made inroads on the sail powered fleet of the Caribbean. In the past decade, however, a reprieve has been granted- the energy crisis. Newly constructed vessels, mostly sloops, are built with their full rigs since the wind is cheaper than fuel oil. Less than a hundred miles from the coast of Florida a fl eet of Bahamian sloops work under sail. Paradoxical as it may seem that commercial sail exists so close to the highly developed United States, it underscores the major reason why. The romanticism and aesthetic properties of sailing craft appeal to the student of maritime history. To the indigent native, however, it is a matterof practicality and survival at his livelihood , utilizing the free wind . Native craft are a synthesis of local materials and design requirements for specific usage. Their design and appearance also reflect those of craft once used by colonists and traders to the Caribbean . The most striking example of this borrowing of design are the whaling boats built and sailed out of Bequia , an island in the Vincentian Grenadines. These craft are virtual replicas of those one can see at Mystic Seaport Museum in Connecticut or the Whaling Museum in New Bedford , Massachusetts. It is as if the clock had been turned back a hundred years. The Bequian whalers stalk , harpoon and are towed on wild "Nantucket sleigh rides" aboard their double-ended , centerboard, lug rigged whale boats. In 1982 the Bequian whalers caught four whales . The protein-rich meat and whale by-products of oil , bone and ivory teeth supplement their diets and income. Belize, on the western shores of the Caribbean Sea, has a unique geologic formation , the only coral barrier reef in the Western Hemisphere. The outer or eastern edge of the reef is a 1ine of island archipelagos stretching north and south. These atolls calm the lagoon to leeward from the effect of the north east trade winds. Here, the majority of the time, the native sloops sail reaching on north-south courses with the Trade Wind abeam. The sailors take advantage of *See the auth or's "Karaphuna Canoes," Sea History 27, p. 47.