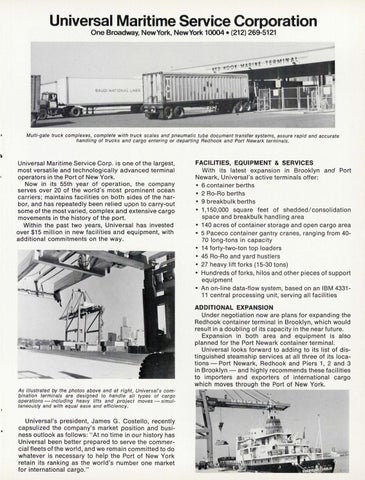 Universal Maritime Service Corp. is one of the largest, most versatile and technologically advanced terminal operators in the Port of New York. Now in its 55th year of operation, the company serves over 20 of the world's most prominent ocean carriers; maintains facilities on both sides of the harbor, and has repeatedly been relied upon to carry-out some of the most varied, complex and extensive cargo movements in the history of the port. Within the past two years, Universal has invested over $15 million in new facilities and equipment, with additional commitments on the way.

FACILITIES, EQUIPMENT & SERVICES With its latest expansion in Brooklyn and Port Newark, Universal's active terminals offer : • 6 container berths • 2 Ro-Ro berths • 9 breakbulk berths • 1, 150,000 square feet of shedded/ consolidation space and breakbulk handling area • 140 acres of container storage and open cargo area • 5 Paceco container gantry cranes, ranging from 4070 long-tons in capacity • 14 forty-two-ton top loaders • 45 Ro-Ro and yard hustlers • 27 heavy lift forks (15-30 tons) • Hundreds of forks, hilos and other pieces of support equipment • An on-line data-flow system, based on an IBM 433111 central processing unit, serving all facilities ADDITIONAL EXPANSION Under negotiation now are plans for expanding the Redhook container terminal in Brooklyn, which would result in a doubling of its capacity in the near future. Expansion in both area and equipment is also planned for the Port Newark container terminal. Universal looks forward to adding to its list of distinguished steamship services at all three of its locations - Port Newark, Redhook and Piers 1, 2 and 3 in Brooklyn - and highly recommends these facilities to importers and exporters of international cargo which moves through the Port of New York.

As illustrated by the photos above and at right, Universa/'s combination terminals are designed to handle all types of cargo operations - including heavy lifts and project moves - simultaneously and with equal ease and efficiency.

Universal's president, James G . Costello, recently capsulized the company's market position and business outlook as follows: "At no time in our history has Universal been better prepared to serve the commercial fleets of the world, and we remain committed to do whatever is necessary to help the Port of New York retain its ranking as the world's number one market for international cargo."