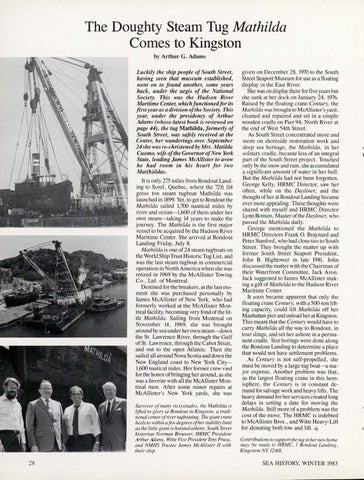 The Doughty Steam Tug Mathilda Comes to Kingston by Arthur G. Adams Luckily the ship people of South Street, having seen that museum established, went on to found another, some years back, under the aegis of the National Society. This was the Hudson River Maritime Center, which functioned for its first year as a division ofthe Society. This year, under the presidency of Arthur Adams (whose latest book is reviewed on page 44), the tug Mathilda, formerly of South Street, was safely received at the Center, her wanderings over. September 24 she was re-christened by Mrs. Matilda Cuomo, wife ofthe Governor of New York State, leading James McAllister to avow he had room in his heart for two Mat(h)ildas. It is only T75 miles from Rondout Landing to Sorel, Quebec, where the 72ft 114 gross ton steam tugboat Mathilda was launched in 1899. Yet, to get to Rondout the Mathilda sailed 1,700 nautical miles by ri ver and ocean-1,600 of them under her own steam-taking 14 years to make the journey. The Mathilda is the first major vessel to be acquired by the Hudson River Maritime Center. She arrived at Rondout Landing Friday, July 8. Mathilda is one of24 steam tugboats on the World Ship Trust Historic Tug List, and was the last steam tugboat in commercial operation in North America when she was retired in 1969 by the McAllister Towing Co. , Ltd. of Montreal . Destined for the breakers, at the last moment she was purchased personally by James McAllister of New York , who had formerly worked at the McAllister Montreal facility, becoming very fond of the little Mathilda. Sailing from Montreal on November 14, 1969, she was brought around by sea under her own steam- down the St. Lawrence River, through the Gulf of St. Lawrence, through the Cabot Strait, and out to the open Atlantic. Then she sailed all around Nova Scotia and down the New England coast to New York City1,600 nautical miles. Her former crew vied for the honor of bringing her around , as she was a favorite with all the McAllister Montreal men . After some minor repairs at McAllister's New York yards, she was Survivor of many vicissitudes, the Mathilda is lifted to glory at Rondout in Kingston, a traditional center of river tugboating. The giant crane heels to within a few degrees ofher stability limit as the little giant is hoisted ashore. South Street historian Norman Brouwer, HRMC President Arthur Adams, Witte Vice President Tony Prasa, and NMHS Trustee James McAllister II with their ship.

given on December 28, 1970 to the South Street Seaport Museum for use as a floating display in the East River. She was on display there for five years but she sank at her dock on January 24, 1976. Raised by the floating crane Century, the Mathilda was brought to McAllister's yard , cleaned and repaired and set in a simple wooden cradle on Pier 94, North River at the end of West 54th Street. As South Street concentrated more and more on shoreside restoration work and deep sea heritage, the Mathilda, in her solitary cradle, became less of an integral part of the South Street project. Touched only by the snow and rain, she accumulated a significant amount of water in her hull. But the Mathilda had not been forgotten. George Kelly, HRMC Director, saw her often , while on the Dayliner, and the thought of her at Rondout Landing became ever more appealing. These thoughts were shared with myself and HRMC Director Lynn Bottum , MasteroftheDayliner, who passed the Mathilda daily. George mentioned the Mathilda to HRMC Directors Frank 0. Braynard and Pete r Stanford , who had close ties to South Street. They brought the matter up with former South Street Seaport President, John B. Hightower in late 1981. John discussed the matter with the Chairman of their Waterfront Committee, Jack Aron . Jack suggested to James McAllister making a gift of Mathilda to the Hudson River Maritime Center. It soon became apparent that only the floating crane Century, with a 500-ton lifting capacity, could lift Mathilda off her Manhattan pier and unload her at Kingston . This meant that the Century would have to carry Mathilda all the way to Rondout , in tour slings, and set her ashore in a permanent cradle. Test borings were done along the Rondout Landing to determine a place that would not have settlement problems. As Century is not self-propelled, she mu st be moved by a large tug boat- a major expense. Another problem was that , as the largest floating crane in this hem. isphere, the Century is in constant demand for salvage work and heavy lifts. The heavy demand for her services created long delays in setting a date for moving the Mathilda. Still more of a problem was the cost of the move. The HRMC is indebted to McAllister Bros., and Witte Heavy-Lift for tdonating both tow and lift . .t Conrributions to support the tug in her new home may be made to HRMC, 1 Rondout Landing, King~ston NY 12401.