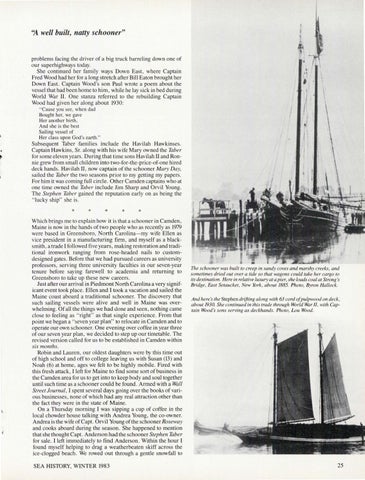 problems facing the driver of a big truck barreling down one of our superhighways today. She continued her fa mily ways Down East, where Captain Fred Wood had her for a long stretch after Bill Eaton brought her Down East. Captain Wood's son Paul wrote a poem about the vessel that had been home to him , while he lay sick in bed during World War II . One stanza referred to the rebuilding Captain Wood had given her along about 1930: " Cause you see, when dad Bought her, we gave Her another birth , And she is the best Sailing vessel of Her class upo n God's ea rth ."

Subsequent Taber families include the Havilah Hawkinses . Captain Hawkins, Sr. along with his wife Mary owned the Taber fo r some eleven years. During that time sons Hav ilah II and Ronnie grew from small children into two-for-the-price-of-one hired deck hands. Havilah II , now captain of the schooner Mary Day, sailed the Taber the two seasons prior to my getting my papers. For him it was coming full circle . Other Camden captains who at one time owned the Taber include Jim Sharp and Orvil Young. The Stephen Taber gained the reputation early on as being the " lucky ship" she is.

Which brings me to explai n how it is that a schooner in Camden , Maine is now in the hands of two people who as recently as 1979 were based in Greensboro, North Carolina-my wife Ellen as vice president in a manufacturing firm , and myself as a blacksmith , a trade I followed five years , maki ng restoration and traditional ironwork ranging from rose-headed nails to customdesigned gates . Before that we had pursued careers as uni versity professors , serving three university faculties in our seven-year tenure before say ing farewell to academia and returning to Greensboro to take up these new careers. Just afterour arrival in Piedmont North Carolina a very significant event took place. Ellen and I took a vacation and sailed the Maine coast aboard a traditional schooner. The discovery that such sailing vessels were alive and well in Maine was overwhelming. Of all the th.ings we had done and seen, nothing came close to feeling as " right" as that single experience. From that point we began a "seven yea r plan" to relocate in Camden and to operate our own schooner. One evening over coffee in year three of our seven year plan , we decided to step up our timetable. The revised version called fo r us to be established in Camden within six months. Robin and Lauren , our oldest daughters were by this time out of high school and off to college leaving us with Susan (13) and Noah (6) at home, ages we felt to be highl y mobile. Fired with this fresh attack , I left for Maine to find some sort of business in the Camden area for us to get into to keep body and soul together until such time as a schooner could be found . Armed with a Wall Street Journal, I spent several days going over the books of various businesses, none of which had any real attraction other than the fac t they were in the state of Maine. On a Thursday morning I was s ipping a cup of coffee in the local chowder house talking with Andrea Young, the co-owner. Andrea is the wife of Capt. Orvil Young of the schooner Roseway and cooks aboard during the season. She happened to mention that she thought Capt. Anderson had the schooner Stephen Taber for sale. I left immediately to find Anderson. Within the hour I found myself helping to drag a weatherbeaten skiff across the ice-clogged beach. We rowed o ut through a gentle snowfall to SEA HIS1DRY, WINTER 1983

The schooner was built to creep in sandy coves and marshy creeks, and sometimes dried out over a tide so that wagons could take her cargo to its destination. Here in relative luxury at a pier, she loads coal at Strong's Bridge, F:ast Setaucket, New York, about 1885. Photo, Byron Hallock. And here's the Stephen drifting along with 63 cord ofpulpwood on deck , about 1930. She continued in this trade through World War 11, with Captain Wood's sons serving as deckhands. Photo, Lou Wood.