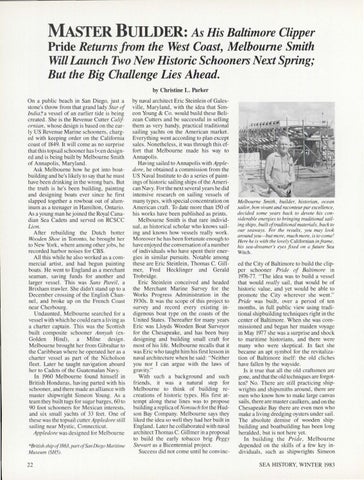 MASTER BUILDER: As His Baltimore Clipper Pride Returns from the West Coast, Melbourne Smith Will Launch Two New Historic Schooners Next Spring; But the Big Challenge Lies Ahead. by Christine L. Parker On a public beach in San Diego, just a stone's throw from that grand lady Star of India~ a vessel of an earlier tide is being created . She is the Revenue Cutter Calif ornian , whose design is based on the early US Revenue Marine schooners , charged with keeping order on the California coast of 1849. It will come as no surprise that this topsail schooner has ken designed and is being built by Melbourne Smith of Annapolis , Maryland . Ask Melbourne how he got into boatbuilding and he's likely to say that he must have been drinking in the wrong bars . But the truth is he's been building, painting and designing boats ever since he first slapped together a rowboat out of aluminum as a teenager in Hamilton , Ontario. As a young man he joined the Royal Canadian Sea Cadets and served on RCSCC lion. After rebuilding the Dutch botter Wooden Shoe in Toronto, he brought her to New York , where among other jobs, he recorded harbor noises for CBS. All this while he also worked as a commercial artist, and had begun painting boats. He went to England as a merchant seaman , saving funds for another and larger vessel. This was Sans Pareil, a Brixham trawler. She didn't stand up to a December crossing of the English Channel, and broke up on the French Coast near Cherbourg. Undaunted , Melbourne searched for a vessel with which he could earn a living as a charter captain . This was the Scottish built composite schooner Annyah (exGolden Hind) , a Milne design . Melbourne brought her from Gibraltar to the Caribbean where he operated her as a charter vessel as part of the Nicholson fleet. Later he taught navigation aboard her to Cadets of the Guatemalan Navy. In 1960 Melbourne found himself in British Honduras, having parted with his schooner, and there made an alliance with master shipwright Simeon Young. As a team they built tugs for sugar barges, 60 to 90 foot schooners for Mexican interests, and six small yachts of 33 feet. One of these was the topsail cutter Appledore still sailing near Mystic, Connecticut. Appledore was designed for Melbourne *British ship of 1863, part ofSan Diego Maritim e Museum (SH5).

by naval architect Eric Steinlein of Galesville, Maryland , with the idea that Simeon Young & Co. would build these Belizean Cutters and be successful in selling them as very handy, practical traditional sailing yachts on the American market. Everything went according to plan except sales . Nonetheless, it was through this effort that Melbourne made his way to Annapolis. Having sailed to Annapolis with Appledore , he obtained a commission from the US Naval Institute to do a series of paintings of historic sailing ships of the American Navy. For the next several years he did intensive research on sailing vessels of many types, with special concentration on American craft. To date more than 150 of his works have been published as prints. Melbourne Smith is that rare individual , as historical scholar who knows sailing and knows how vessels really work. Moreover he has been fortunate enough to have enjoyed the conversation of a number of individuals who have spent their energies in similar pursuits. Notable among these are Eric Steinlein, Thomas C. Gillmer, Fred Hecklinger and Gerald Trobridge. Eric Steinlein conceived and headed the Merchant Marine Survey for the Works Progress Administration in the 1930s. It was the scope of this project to survey and record every existing indigenous boat type on the coasts of the United States. Thereafter for many years Eric was Lloyds Wooden Boat Surveyor for the Chesapeake, and has been busy designing and building small craft for most of his life. Melbourne recalls that it was Eric who taught him his first lesson in naval architecture when he said: "Neither you nor I can argue with the laws of gravity." With such a background and such friends , it was a natural step for Melbourne to think of building recreations of historic types. His first attempt along these lines was to propose building a replica of Nonsuch for the Hudson Bay Company. Melbourne says they liked the idea so well they had her built in England. Later he collaborated with naval architect Thomas C. Gillmer in a proposal to build the early tobacco brig Peggy Stewart as a Bicentennial project. Success did not come until he convinc-

Melbourne Smith, builder, historian, ocean sailor, ban vivant and raconteur par excellence, decided some years back to devote his considerable energies to bringing traditional sailing ships, built oftraditional materials, back to our seaways. For the results, you may look around you-but more, much more, is to come! Here he is with the lovely Ca li fornian in frame, his sea-dreamer's eyes fixed on a fature Sea Witch.

ed the City of Baltimore to build the clipper schooner Pride of Baltimore in lfJ76-77. "The idea was to build a vessel that would really sail , that would be of historic value, and yet would be able to promote the City wherever she went." Pride was built, over a period of ten months , in full public view using traditional shipbuilding techniques right in the center of Baltimore. When she was commissioned and began her maiden voyage in May lfJ77 she was a surprise and shock to maritime historians, and there were many who were skeptical. In fact she became an apt symbol for the revitalization of Baltimore itself: the old cliches have fa llen by the wayside. Is it true that all the old craftsmen are gone, and that the old techniques are forgotten? No. There are still practicing shipwrights and shipsmiths around , there are men who know how to make large canvas sails , there are master caulkers, and on the Chesapeake Bay there are even men who make a living dredging oysters under sail. The absolute demise of wooden shipbuilding and boatbuilding has been long heralded , but is not here yet. In building the Pride, Melbourne depended on the skills of a few key individuals, such as shipwrights Simeon SEA HISTORY, WINTER 1983