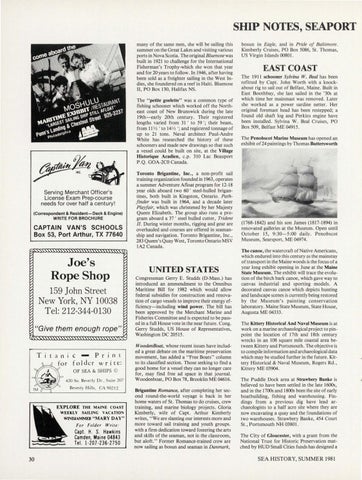 SHIP NOTES, SEAPORT many of the same men, she will be sailing this summer on the Great Lakes and visiting various ports in Nova Scotia. The original Bluenose was built in 1921 to challenge for the International Fisherman's Trophy-which she won that year and for 20 years to follow . In 1946, after having been sold as a freighter sailing in the West Indies, she foundered on a reef in Haiti . Bluenose II, PO Box 130, Halifax NS . The "petite goelette" was a common type of fishing schooner which worked off the Northeast coast of New Brunswick during the late 19th-early 20th century. Their registered lengths varied from 31 ' to 59 '; their beam, from 11Vi ' to14 Vi ';and registered tonnage of up to 21 tons . Naval architect Paul-Andre White has researched the history of these schooners and made new drawings so that such a vessel could be built on site, at the Village Historique Acadien, c.p. 310 Lac Beauport P.Q. GOA-2CO Canada.

Toronto Brigantine, Inc., a non-profit sail training organization founded in 1963, operates a summer Adventure Afloat program for 12-18 year olds aboard two 60' steel-hulled brigantines, both built in Kingston, Ontario . Pathfinder was built in 1964, and a decade later Play/air, which was christened by her Majesty Queen Elizabeth . The group also runs a program aboard a 37 ' steel hulled cutter, Trident II. During winter months, rigging and gear are overhauled and courses are offered in seamanship and navigation . Toronto Brigantine, Inc., 283 Queen's Quay West, Toronto Ontario MSV IA2 Canada.

UNITED STATES Congressman Gerry E. Studds (D-Mass.) has introduced an ammendment to the Omnibus Maritime Bill for 1982 which would allow federal subsidies for construction and renovation of cargo vessels to improve their energy efficiency-including wind power. The bill has been approved by the Merchant Marine and Fisheries Committee and is expected to be passed in a full House vote in the near future. Cong. Gerry Studds, US House of Representatives, Washington DC 20515.

WoodenBoat, whose recent issues have included a great debate on the maritime preservation movement, has added a "Free Boats" column to its classified section. Those seeking to find a good home for a vessel they can no longer care for, may find free ad space in that journal. Woodenboat, PO Box 78, Brooklin ME 04616. Brigantine Romance, after completing her second round-the-world voyage is back in her home waters of St. Thomas to do cruises, crew training, and marine biology projects. Gloria Kimberly, wife of Capt. Arthur Kimberly writes, "We are slanting our interests more and more toward sail training and youth groups. with a firm dedication toward fostering the arts and skills of the seaman, not in the classroom, but aloft." Former Romance-trained crew are now sailing as bosun and seaman in Danmark,

EAST COAST The 1911 schooner Sylvina W. Beal has been refitted by Capt. John Worth with a knockabout rig to sail out of Belfast, Maine. Built in East Boothbay, she last sailed in the '30s at which time her mainmast was removed. Later she worked as a power sardine netter. Her original foremast head has been restepped; a found old shaft log and Perkins engine have been installed . Sylvina W. Beal Cruises, PO Box 509, Bel fast ME 04915 . The Penobscot Marine Museum has opened an exhibit of 24 paintings by Thomas Buttersworth

(1768-1842) and his son James (1817-1894) in renovated galleries at the Museum. Open until October 15, 9:30-5 :00 daily . Penobscot Museum, Searsport, ME 04974. The canoe, the watercraft of Native Americans, which endured into this century as the mainstay of transport in the Maine woods is the focus of a year long exhibit opening in June at the Maine State Museum. The exhibit will trace the evolution of the birch bark canoe, which gave way to canvas industrial and sporting models. A decorated canvas canoe which depicts hunting and landscape scenes is currently being restored by the Museum's painting conservation laboratory. Maine State Museum, State House, Augusta JylE 04333. The Kittery Historical And Naval Museum is at work on a marine archaeological project to pinpoint the location of 17th and 18th century wrecks in an 108 square mile coastal area between Kittery and Portsmouth. The objective is to compile information and archaeological data which may be studied further in the future. Kittery Historical & Naval Museum, Rogers Rd ., Kittery ME 03904. The Puddle Dock area at Strawbery Banke is believed to have been settled in the late 1600s, and in the 1700s and 1800s been the site of early boatbuilding, fishing and warehousing. Findings from a previous dig have lead archaeologists to a half acre site where they are now excavating a quay and the foundations of two warehouses. Strawbery Banke, 454 Court St., Portsmouth NH 03801. The City of Gloucester, with a grant from the National Trust for Historic Preservation matched by HUD Small Cities funds has designed a