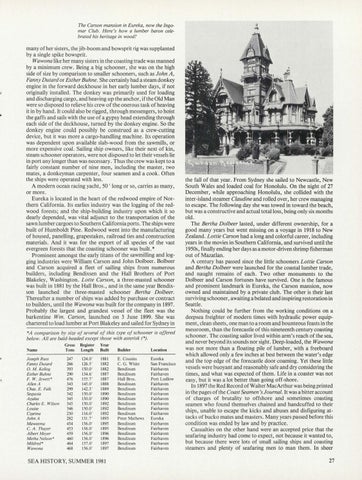 The Carson mansion in Eureka, now the Ingamar Club. Here's how a lumber baron celebrated his heritage in wood!

many of her sisters, the jib-boom and bowsprit rig was supplanted by a single spike bowsprit. Wawona like her many sisters in the coasting trade was manned by a minimum crew. Being a big schooner, she was on the high side of size by comparison to smaller schooners, such as John A, Fanny Dutard or Esther Buhne. She certainly had a steam donkey engine in the forward deckhouse in her early lumber days, if not originally installed. The donkey was primarily used for loading and discharging cargo, and heaving up the anchor, if the Old Man were so disposed to relieve his crew of the onerous task of heaving it in by hand. It could also be rigged, through messengers, to hoist the gaffs and sails with the use of a gypsy head extending through each side of the deckhouse, turned by the donkey engine. So the donkey engine could possibly be construed as a crew-cutting device, but it was more a cargo-handling machine. Its operation was dependent upon available slab-wood from the sawmills, or more expensive coal. Sailing ship owners, like their next of kin, steam schooner operators, were not disposed to let their vessels lie in port any longer than was necessary. Thus the crew was kept to a fairly constant number of nine men, including the master, two mates, a donkeyman carpenter, four seamen and a cook. Often the ships were operated with less. A modern ocean racing yacht, 50' long or so, carries as many, or more. Eureka is located in the heart of the redwood empire of Northern California. Its earlies industry was the logging of the redwood forests; and the ship-building industry upon which it so dearly depended, was vital adjunct to the transportation of the sawn lumber cargoes to Southern California ports. The ships were built of Humboldt Pine. Redwood went into the manufacturing of housed, panelling, grapestakes, railroad ties and construction materials. And it was for the export of all species of the vast evergreen forests that the coasting schooner was built.* Prominent amongst the early titans of the sawmilling and logging industries were William Carson and John Dolbeer. Bolbeer and Carson acquired a fleet of sailing ships from numerous builders, including Bendixsen and the Hall Brothers of Port Blakeley, Washington. Lotte Carson, a three-masted schooner was built in 1881 by the Hall Bros., and in the same year Bendixson launched the three-masted schooner Bertha Do/beer. Thereafter a number of ships was added by purchase or contract to builders, until the Wawonawas built for the company in 1897. Probably the largest and grandest vessel of the fleet was the barkentine Wm. Carson, launched on 3 June 1899. She was chartered to load lumber at Port Blakeley and sailed for Sydney in *A comparison by size of several of this type of schooner is offered below. All are bald-headed except those with asterisk(*). Name

the fall of that year. From Sydney she sailed to Newcastle, New South Wales and loaded coal for Honolulu. On the night of 27 December, while approaching Honolulu, she collided with the inter-island steamer Claudine and rolled over, her crew managing to escape. The following day she was towed in toward the beach, but was a constructive and actual total loss, being only six months old. The Bertha Do/beer lasted, under different ownership, for a good many years but went missing on a voyage in 1918 to New Zealand. Lottie Carson had a long and colorful career, including years in the movies in Southern California, and survived until the 1950s, finally ending her days as a motor-driven shrimp fisherman out of Mazatlan. A century has passed since the little schooners Lottie Carson and Bertha Do/beer were launched for the coastal lumber trade, and naught remains of each. Two other monuments to the Dolbeer and Carson fortunes have survived. One is the famous and prominent landmark in Eureka, the Carson mansion, now owned and maintained by a private club. The other is their last surviving schooner, awaiting a belated and inspiring restoration in Seattle. Nothing could be further from the working conditions on a deepsea freighter of modern times with hydraulic power equipment, clean sheets, one man to a room and bounteous feasts in the messroom, than the forecastle of this nineteenth century coasting schooner. The coasting sailor lived within arm's reach of the sea, and never beyond its sounds nor sight. Deep-loaded, the Wawona was not more than a floating pile of lumber, with a freeboard which allowed only a few inches at best between the water's edge and the top edge of the forecastle door coaming. Yet these little vessels were buoyant and reasonably safe and dry considering the times, and what was expected of them. Life in a coaster was not easy, but it was a lot better than going off-shore. In 1897 the Red Record of Walter MacArthur was being printed in the pages of the Coast Seamen's Journal. It was a bitter account of charges of brutality to offshore and sometimes coasting seamen who found themselves chained and handcuffed to their ships, unable to escape the kicks and abuses and disfiguring attacks of bucko mates and masters. Many years passed before this condition was ended by Jaw and by practice. Casualties on the other hand were an accepted price that the seafaring industry had come to expect, riot because it wanted to, but because there were lots of small sailing ships and coasting steamers and plenty of seafaring men to man them. In sheer 27