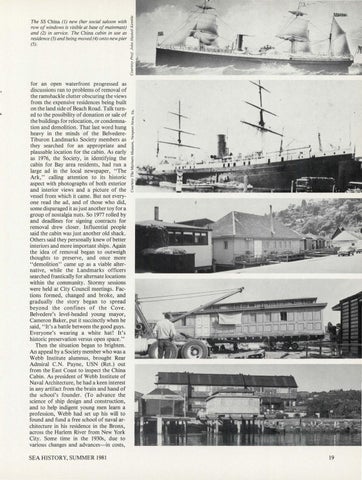 for an open waterfront progressed as discussions ran to problems of removal of the ramshackle clutter obscuring the views from the expensive residences being built on the land side of Beach Road. Talk turned to the possibility of donation or sale of s!.., the buildings for relocation, or condemna- ~ tion and demolition. That last word hung heavy in the minds of the BelvedereTiburon Landmarks Society members as they searched for an appropriate and plausable location for the cabin. As early as 1976, the Society, in identifying the cabin for Bay area residents, had run a large ad in the local newspaper, "The Ark," calling attention to its historic aspect with photographs of both exterior and interior views and a picture of the vessel from which it came. But not everyone read the ad, and of those who did, some disparaged it as just another toy for a group of nostalgia nuts. So 1977 rolled by and deadlines for signing contracts for removal drew closer. Influential people said the cabin was just another old shack. Others said they personally knew of better interiors and more important ships. Again the idea of removal began to outweigh thoughts to preserve, and once more "demolition" came up as a viable alternative, while the Landmarks officers searched frantically for alternate locations within the community. Stormy sessions were held at City Council meetings. Factions formed, changed and broke, and gradually the story began to spread beyond the confines of the Cove. Belvedere's level-headed young mayor, Cameron Baker, put it succinctly when he said, "It's a battle between the good guys. Everyone's wearing a white hat! It's historic preservation versus open space." Then the situation began to brighten. An appeal by a Society member who was a Webb Institute alumnus, brought Rear Admiral C.N. Payne, USN (Ret.) out from the East Coast to inspect the China Cabin. As president of Webb Institute of Naval Architecture, he had a keen interest in any artifact from the brain and hand of the school's founder. (To advance the science of ship design and construction, and to help indigent young men learn a profession, Webb had set up his will to found and fund a free school of naval architecture in his residence in the Bronx, across the Harlem River from New York City. Some time in the 1930s, due to various changes and advances-in costs, SEA HISTORY, SUMMER 1981