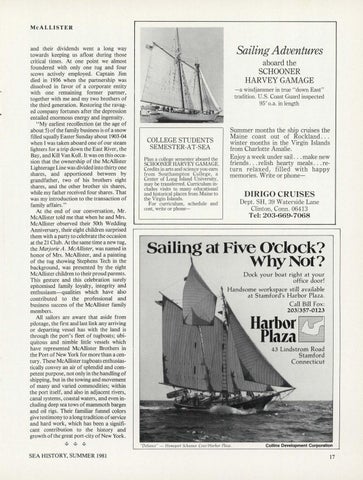 and their dividends went a long way towards keeping us afloat during those critical times. At one point we almost foundered with only one tug and four scows actively employed. Captain Jim died in 1936 when the partnership was dissolved in favor of a corporate entity with one remaining former partner, together with me and my two brothers of the third generation. Restoring the ravaged company fortunes after the depression entailed enormous energy and ingenuity. "My earliest recollection (at the age of about 5) of the family business is of a snow filled squally Easter Sunday about 1903-04 when I was taken aboard one of our steam lighters for a trip down the East River, the Bay, and Kill Van Kull . It was on this occasion that the ownership of the McAllister Lighterage Line was divided into thirty one shares, and apportioned between by grandfather, two of his brothers eight shares, and the other brother six shares, while my father received four shares. That was my introduction to the transaction of family affairs." At the end of our conversation, Mr. McAllister told me that when he and Mrs. McAllister observed their 50th Wedding Anniversary, their eight children surprised them with a party to celebrate the occasion at the 21 Club. At the same time a new tug, the Marjorie A. McAllister, was named in honor of Mrs. McAllister, and a painting of the tug showing Stephens Tech in the background, was presented by the eight McAllister children to their proud parents. This gesture and this celebration surely epitomised family loyalty, integrity and enthusiasm-qualities which have also contributed to the professional and business success of the McAllister family members. All sailors are aware that aside from pilotage, the first and last link any arriving or departing vessel has with the land is through the port's fleet of tugboats; ubiquitous and nimble little vessels which have represented McAllister Brothers in the Port of New York for more than a century. These McAllister tugboats enthusiastically convey an air of splendid and competent purpose, not only in the handling of shipping, but in the towing and movement of many and varied commodities; within the port itself, and also in adjacent rivers, canal systems, coastal waters, and even including deep sea tows of mammoth barges and oil rigs. Their familiar funnel colors give testimony to a long tradition of service and hard work, which has been a significant contribution to the history and growth of the great port-city of New York.

COLLEGE STUDENTS SEMESTER-AT-SEA Plan a college semester aboard the

SCHOONER HARVEY GAMAGE. Credits in arts and science you earn from Sout ha mpton College , a Center of Long Island University, may be transferred. Curriculum includes visits to many educational and historical places from Maine to the Virgin Islands. For curriculum, schedule and cost, write or phone-

Sailing at Five O'clock? Why Not? Dock your boat right at your