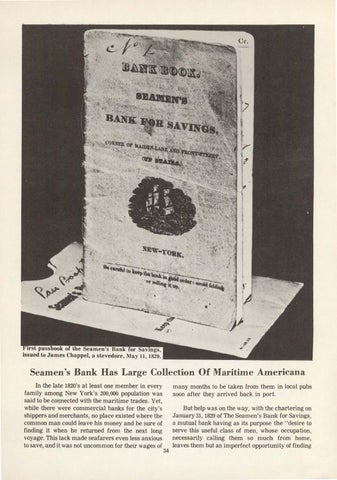 Seamen's Bank Has Large Collection Of Maritime Americana In the late 1820's at least one member in every family among New York's 200,000 population was said to be connected with the maritime trades. Yet, while there were commercial banks for the city's shippers and merchants, no place existed where the common man could leave his money and be sure.of finding it when he returned from the next long voyage. This lack made seafarers even less anxious to save, and it was not uncommon for their wages of

many months to be taken from them in local pubs soon after they arrived back in port.

But help was on the way, with the chartering on January 31, 1829 of The Seamen's Bank for Savings, a mutual bank having as its purpose the "desire to serve this useful class of men, whose occupation, necessarily calling them so much from home, leaves them but an imperfect opportunity of finding