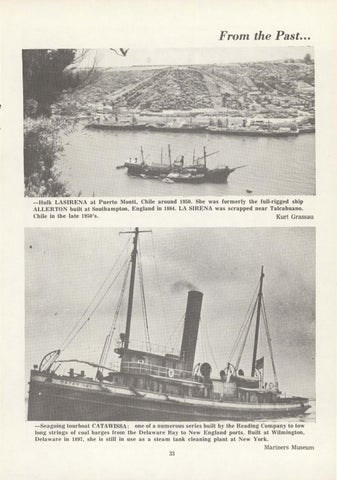 -Hulk LASIRENA at Puerto Chile around 1950. She was formerly the full-rigged ship ALLERTON built at Southampton, England in 1884. LA SIRENA was scrapped near Talcahuano, Chile in the late 1950&#39;s. Kurt Grassau

-Seagoing tourboat CATAWISSA: one of a numerous series built by the Reading Company to tow long strings of coal barges from · the Delaware Bay to New England ports. Built at Wilmington, Delaware in 1897, she is still in use as a steam tank cleaning plant at New York. Mariners Museum 33