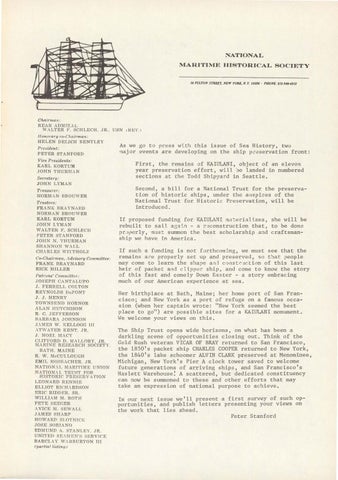 As we go to press with this issue of Sea History, two •naj or events are developing on the ship pL·eservation front: First, the remains of KAIULANI, object of an eleven year preservation effort, will ae landed in numbered sections at the Todd Shipyard in Seattle. Second, a bill for a National Trust for the preservation of historic ships, under the a11spices of the National Trust for Historic P•eservation, will be introduced.

If proposed funding for KAIUL.l\N&#39;I ma&#39;:erial i.zes, she will be rebuilt to sail a0ain - a J:2construction that, to be done prJperly, must summon the best scholarship and craftsmanship we have in America.

If such a funding is not forthcoming, we must see that the remains a i:e properly set up and preserved, 50 t&quot;hat people may come to learn the shape an-:l. co11st&lt;7 •1ction of this last heir of packet and clipper ship, and come to know the story of this fast and comely Down Easter - a story embracing much of our American experience at sea. Her birthplace at Bath, Maine; her home port of San Francisco; and New York as a port of refuge on a famous occasion (when her captain wrote: &quot;New York seemed the best place to go&quot;) are possible sites for a KAIULANI monument. We welcome your views on this. The Ship Trust opens wide horizons, on what has been a darkling scene of opportunities closing out. Think of the Gold Rush veteran VICAR OF BRAY returned to San Francisco, the 1850&#39;s packet ship CHARLES COOPER returned to New York, the 1840&#39;s lake schooner ALVIN CLARK preserved at Menominee, Michigan, New York&#39;s Pier A clock tower saved to welcome future generations of arriving ships, and San Francisco&#39;s Haslett Warehouse! A scattered, but dedicated constituency can now be summoned to these and other efforts that may take an expression of national purpose to achieve. Iri our next issue we&#39;ll present a first survey of such opportunities, and publish letters presenting your views on the work that lies ahead. Peter Stanford