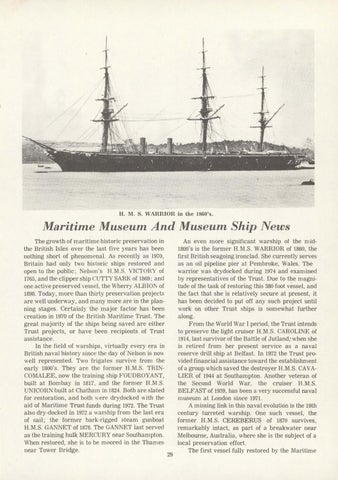 Maritime Museum And Museum Ship News The growth of maritime historic preservation in the British Isles over the last five years has been nothing short of phenomenal. As recently as 1970, Britain had only two historic ships restored and open to the public ; Nelson&#39;s H.M.S. VICTORY of 1765, and the clipper ship CUTTY SARK of 1869; and one active preserved vessel, the Wherry ALBION of 1898. Today, more than thirty preservation projects are well underway, and many more are in the planning stages. Certainly the major factor has been creation in 1970 of the British Maritime Trust. The great majority of the ships being saved are either Trust projects, or have been recipients of Trust assistance. In the field of warships, virtually every era in British naval history since the day of Nelson is now well represented. Two frigates survive from the early 1800&#39;s. They are the former H.M.S. TRINCOMALEE, now the training ship FOUDROYANT, built at Bombay in 1817, and the former H.M.S. UNICORN built at Chatham in 1824. Both are slated for restoration, and both were drY.docked with the aid of Maritime Trustfunds during 1972. The Trust also dry-docked in 1972 a warship from the last era of sail; the former bark-rigged steam gunboat H.M.S. GANNET of 1878. The GANNET last served as the training hulk MERCURY near Southampton. When restored, she is to be moored in the Thames near Tower Bridge.

An even more significant warship of the mid1800&#39;s is the former H.M.S. WARRIOR of 1860, the first British seagoing ironclad. She currently serves as an oil pipeline pier at Pembroke, Wales. The warrior was drydocked during 1974 and examined by representatives of the Trust. Due to the magnitude of the task of restoring this 380 foot vessel, and the facl that she 1s relatively secure at present, it has been decided to put off any such project until work on other Trust ships is somewhat further along . From the World War I period, the Trust intends to preserve the light cruiser H.M.S. CAROLINE of 1914, last survivor of the Battle of Jutland; when she is retired from her present service as a naval reserve drill ship at Belfast. In 1972 the Trust provided financial assistance toward the establishment of a group which saved the destroyer H.M.S. CAVALIER of 1944 at Southampton. Another veteran of the Second World War, the cruiser H.M.S. BELFAST of 1939, has been a very successful naval museum at London since 1971. A missing link in this naval evolution is the 19th century turreted _warship. One such vessel, the former H.M.S. .CEREBERUS Âˇ of 1870 survives, remarkably intact, as part of a breakwater near Melbourne, Australia, where she is the subject of a local preservation effort. The first vessel fully restored by the Maritime