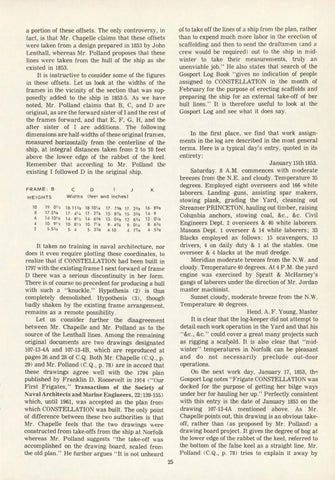 of to take off the lines of a ship from the plan, rather than to expend much more labor in the erection of scaffolding and then to send the draftsmen <and a crew would be required) out to the ship in midwinter to take their measurements, truly an unenviable job." He also states that search of the Gosport Log Book " gives no indication of people assigned to CONSTELLATION in the month of February for the purpose of erecting scaffolds and preparing the ship for an external take-off of her hull lines." It is therefore useful to look at the Gosport Log and see what it does say.

a portion of these offsets. The only controversy, in fact, is that Mr. Chapelle claims that these offsets were taken from a design prepared in 1853 by John Lenthall, whereas Mr. Polland proposes that these lines were taken from the hull of the ship as she existed in 1853. It is instructive to consider some of the figures in these offsets. Let us look at the widths of the frames in the vicinity of the section that was supposedly added to the ship in 1853-5. As we have noted , Mr. Polland claims that B, C, and D are original, as are the forward sister of I and the rest of the frames forward , and that E, F , G, H, and the after sister of I are additions. The following dimensions are half-widths of these original frames , measured horizontally from the centerline of the ship, at integral distances taken from 2 to IO feet above the lower edge of the rabbet of the keel. Remember that according to Mr. Polland the existing I followed D in the original ship. FRAME: B HEIGHTS 10 8 6 4 2

In the first place, we find that work assignments in the log are described in the most general terms. Here is a typical day's entry, quoted in its entirety : January 15th 1853. Saturday. 8 A.M . commences with moderate breezes from t)le N.E . and cloudy. Temperature 35 degrees . Employed eight overseers and 166 white laborers. Landing guns, assisting spar makers, stowing plank, grading the Yard, cleaning out Streamer PRINCETON, hauling out timber, raising Columbia anchors, stowing coal, &c., &c. Civil Engineers Dept. 2 overseers & 40 white laborers. Masons Dept. 1 overseer & 14 white laborers; 33 Blacks employed as follows : 15 scavengers, 13 drivers, 4 on daily duty & 1 at the stables. One overseer & 4 blacks at the mud dredge. Meridian moderate breezes from the N.W. and cloudy. Temperature40 degrees. At 4 P .M. the yard engine was exercised by Spratt & McHarney's gangs of laborers under the direction of Mr. Jordan master machinist. Sunset cloudy, moderate breeze from the N.W. Temperature 40 degrees . Hend. A. F . Young, Master It is clear that the log-keeper did not attempt to detail each work operation in the Yard and that his " &c., &c." could cover a great many projects such as rigging a scaf)Old. It is also clear that " midwinter" temperatures in Norfolk can be pleasant and do not necessarily preclude out-door operations. On the next work day, January 17, 1853, th ~ Gosport Log notes " Frigate CONSTELLATION was docked for the purpose of getting her bilge ways under her for hauling her up. " Perfectly consistent with this entry is the date of January 1853 on the drawing 107-13-4A mentioned above. As Mr. Chapelle points out, this drawing is an obvious takeoff, rather than (as proposed by Mr. Polland ) a drawing board project. It gives the degree of hog at the lower edge of the rabbet of the keel, referred to the bottom of the false keel as a straight line. Mr. Polland (C.Q., p. 78) tries to explain it away by

It takes no training in naval architecture, nor does it even require plotting these coordinates, to realize that if CONSTELLATION had been built in 1797 with the existing frame I next forward of frame D there was a serious discontinuity in her form. There is of course no precedent for producing a hull with such a " knuckle." Hypothesis (2) is thus completely demolished. Hypothesis (3), though badly shaken by the existing frame arrangement, remains as a remote possibility. Let us consider further the disagreement between Mr. Chapelle and Mr. Polland as to the source of the Lenthall lines. Among the remaining original documents are two drawings designated 107-13-4A and 107-13-4B, which are reproduced at pages 26 and 28 of C.Q. Both Mr. Chapelle (C.Q., p. 29) and Mr. Polland (C.Q., p. 78) are in accord that these drawings agree well with the 1794 plan published by Franklin D. Roosevelt in 1914 ("Our First Frigates, " Transactions of the Society of Naval Architects and Marine Engineers, 22: 139-155) which, until 1961, was accepted as the plan from which CONSTELLATION was built. The only point of difference between these two authorities is that Mr. Chapelle feels that the two drawings were constructed from take-offs from the ship at Norfolk whereas Mr. Polland suggests "the take-off was accomplished on the drawing board, scaled from the old plan." He further argues " It is not unheard