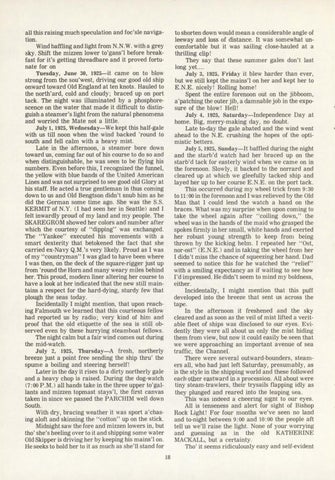 Âˇall this raising much speculation and foc'sle navigation. Wind baffling and light from N.N.W. with a grey sky. Shift the mizzen lower to'gans'l before breakfast for it's getting threadbare and it proved fortunate for on Tuesday, June 30, 1925-it came on to blow strong from the sou'west, driving our good old ship onward toward Old England at ten knots. Hauled to the north'ard, cold and cloudy; braced up on port tack. The night was illuminated by a phosphorescenc:e on the water that made it difficult to distinguish a steamer's light from the natural phenomena and worried the Mate not a little. July 1, 1925, Wednesday-We kept this half-gale with us till noon when the wind backed 'round to south and fell calm with a heavy mist. Late in the afternoon, a steamer bore down toward us, coming far out of his course to do so and when distinguishable, he was seen to be flying his numbers. Even before this, I recognized the funnel, the yellow with blue bands of the United American Lines and was not surprised to see good old Glory at his staff. He acted a true gentleman in thus coming down to us and Old Bengtson didn't snub him as he did the German some time ago. She was the S.S. KERMIT of N.Y. (I had seen her in Seattle) and I felt inwardly proud of my land and my people. The SKAREGROM showed her colors and number after which the courtesy of "dipping" was exchanged. The "Yankee" executed his movements with a smart dexterity that betokened the fact that she carried ex-Navy Q.M.'s very likely. Proud as I was of my "countryman" I was glad to have been where I was then, on the deck of the square-rigger just up from 'round the Horn and many weary miles behind her. This proud, modern liner altering her course to have a look at her indicated that the new still maintains a respect for the hard-dying, sturdy few that plough the seas today. Incidentally I might mention, that upon reaching Falmouth we learned that this courteous fellow had reported us by radio; very kind of him and proof that the old etiquette of the sea is still observed even by these hurrying steamboat fellows. The night calm but a fair wind comes out during the mid-watch. July 2, 1925, Thursday-A fresh, northerly breeze just a point free sending the ship thru' the spume a boiling and steering herself! Later in the day it rises to a dirty northerly gale and a heavy chop is raised. During the dog-watch (7:00 P.M.) all hands take in the three upper to' gallants and mizzen topmast stays'!, the first canvas taken in since we passed the P ARCHIM well down South. With dry, bracing weather it was sport a'chasing aloft and skinning the "cotton" up on the stick. Midnight saw the fore and mizzen lowers in, but tho' she's heeling over to it and shipping some water Old Skipper is driving her by keeping his mains'! on. He seeks to hold her to it as much as she'll stand for

to shorten down would mean a considerable angle of leeway and loss of distance. It was somewhat uncomfortable but it was sailing close-hauled at a thrilling clip! They say that these summer gales don't last long yet .... July 3, 1925, Friday it blew harder than ever, but we still kept the mains'! on her and kept her to E.N.E. nicely! Rolling home! Spent the entire forenoon out on the jibboom, a 'patching the outer jib, a damnable job in the exposure of the blow! Hell ! July 4, 1925, Saturday-Independence Day at home. Big, merry-making day, no doubt. Late to-day the gale abated and the wind went ahead to the N.E. crushing the hopes of the optimistic betters. July 5, 1925, Sunday-It baffled during the night and the starb'd watch had her braced up on the starb'd tack for easterly wind when we came on in the forenoon. Slowly, it backed to the norrard and cleared up at which we gleefully tacked ship and layed her up to her course E.N.E. on the port tack. This occurred during my wheel trick from 9: 30 to 11: 00 in the forenoon and I was relieved by the Old Man that I could lend the watch a hand on the braces. What was my surprise when upon coming to take the wheel again after "coiling down," the wheel was in the hands of the maid who grasped the spokes firmly in her small, white hands and exerted her robust young strength to keep from being thrown by the kicking helm. I repeated her "Ost, nor-ost" (E.N.E.) and in taking the wheel from her I didn't miss the chance of squeezing her hand. Dad seemed to notice this for he watched the "relief" with a smiling expectancy as if waiting to see how I'd impressed. He didn't seem to mind my boldness, either. Incidentally, I might mention that this puff developed into the breeze that sent us across the tape. In the afternoon it freshened and the sky cleared and as soon as the veil of mist lifted a veritable fleet of ships was disclosed to our eyes. Evidently they were all about us only the mist hiding them from view, but now it could easily be seen that we were approaching an important avenue of sea traffic, the Channel. There were several outward-bounders, steamers all, who had just left Saturday, presumably, as is the style in the shipping world and these followed each other eastward in a procession. All about were tiny steam-trawlers, their trysails flapping idly as they plunged and reared into the leaping sea. This was indeed a cheering s1gnt to our eyes. All is tenseness and alert for sight of Bishop Rock Light! For four months we've seen no land and to-night between 9: 00 and 10: 00 the people aft tell us we'll raise the light. None of your worrying and guessing as in the old KATHERINE MACKALL, but a certainty. Tho' it seems ridiculously easy and self-evident 18