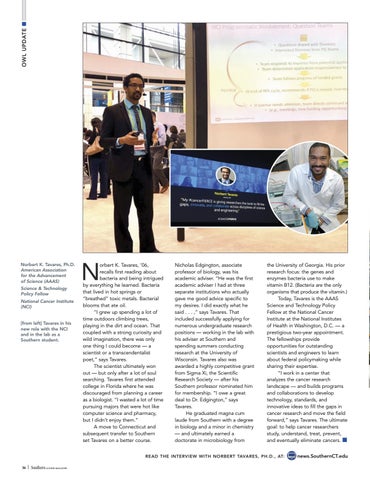 [from left] Tavares in his new role with the NCI and in the lab as a Southern student.

orbert K. Tavares, ’06, recalls first reading about bacteria and being intrigued by everything he learned. Bacteria that lived in hot springs or “breathed” toxic metals. Bacterial blooms that ate oil. “I grew up spending a lot of time outdoors climbing trees, playing in the dirt and ocean. That coupled with a strong curiosity and wild imagination, there was only one thing I could become — a scientist or a transcendentalist poet,” says Tavares. The scientist ultimately won out — but only after a lot of soul searching. Tavares first attended college in Florida where he was discouraged from planning a career as a biologist. “I wasted a lot of time pursuing majors that were hot like computer science and pharmacy, but I didn’t enjoy them.” A move to Connecticut and subsequent transfer to Southern set Tavares on a better course.

Nicholas Edgington, associate professor of biology, was his academic adviser. “He was the first academic adviser I had at three separate institutions who actually gave me good advice specific to my desires. I did exactly what he said . . . ,” says Tavares. That included successfully applying for numerous undergraduate research positions — working in the lab with his adviser at Southern and spending summers conducting research at the University of Wisconsin. Tavares also was awarded a highly competitive grant from Sigma Xi, the Scientific Research Society — after his Southern professor nominated him for membership. “I owe a great deal to Dr. Edgington,” says Tavares. He graduated magna cum laude from Southern with a degree in biology and a minor in chemistry — and ultimately earned a doctorate in microbiology from

the University of Georgia. His prior research focus: the genes and enzymes bacteria use to make vitamin B12. (Bacteria are the only organisms that produce the vitamin.) Today, Tavares is the AAAS Science and Technology Policy Fellow at the National Cancer Institute at the National Institutes of Health in Washington, D.C. — a prestigious two-year appointment. The fellowships provide opportunities for outstanding scientists and engineers to learn about federal policymaking while sharing their expertise. “I work in a center that analyzes the cancer research landscape — and builds programs and collaborations to develop technology, standards, and innovative ideas to fill the gaps in cancer research and move the field forward,” says Tavares. The ultimate goal: to help cancer researchers study, understand, treat, prevent, and eventually eliminate cancers. ■

a publication for alumni and friends of Southern Connecticut State University 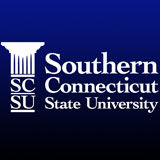