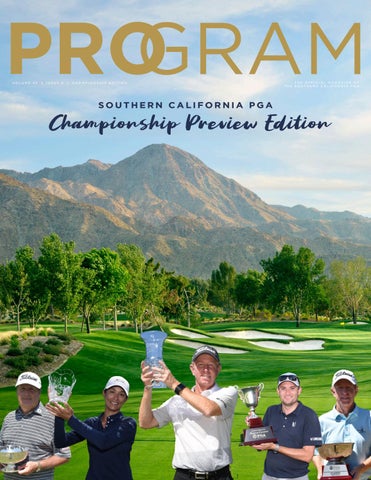 THE OFFICIAL MAGAZINE OF THE SOUTHERN CALIFORNIA PGA

Gary Sowinski, PGA, has left his mark on the Super Senior Championship. His three consecutive win reign is on the line as the 2020 Championship heads to Victoria Club in RIverside, California. The 2019 Championship was played at South Hills Country Club, a William Bell designed golf course with small undulating greens and narrow landing areas. Sowinski started his second round onestroke behind the day-one leader Paul Wise but he stayed persistent. Regarding his mindset heading into the final round, Sowinski said, “I knew number one, starting out the day I had to catch Paul [Wise]”.

Sowinski used birdies on holes #4, #6, #14, and #18 and a lone bogey on #17 to fire a round two score of 69, and a tournament total of 139 to win the Championship by four strokes. Sowinski will have his work cut out for him if he intends to extend his unprecedented streak.

Adding to his already impressive 2019 campaign, Jeff Hart claimed the Southern California PGA Senior Professional Championship in record setting fashion. Champion Jeff Hart, PGA was consistent over the two day and matched his round one score of 64 in the final round to finish at 16-under par, 128, a two-day total best for the Senior Section Championship. Hart’s record setting play put him six shots clear of the field. This Championship was first contested in 1960 and the two-day scoring record was previously held by four-time Champion Chris Starkjohann who finished with a 131 in 2010.“ With Hart’s accuracy off the tee and pinpoint iron play, he swiftly claimed the tournament scoring record and hoisted The Joe Robinson – Roy P. Denney Perpetual Trophy. Even more impressive was his ability to avoid mistakes, with no bogeys throughout his two rounds.

Defending champion Gunner Wiebe of Bel-Air Country Club has his sights set on a repeat at the National Car Rental Southern California Assistant PGA Professional Championship. Wiebe won the 2019 Championship after posting an opening round score of one-under par 71. Hosted at Glendora C.C.defined by narrow fairways protected with bold tree lines created some shot shaping upon which Wiebe thrived, battling through the afternoon heat to post two-under par in his second round with five birdies on the card to claim the title. “The course played really tough in the afternoon when the wind got up… I kind of had to reset a little, and then just grinded all day,” said Gunner after his 2019 victory.

Defending SCPGA Section, and Senior Section Champion Jeff Hart, PGA, will have a lot of strong competition to face off against this year in the desert. Although the registration deadline doesn’t close until August 26th, the Covid-19 related cancelation of Section events early in the 2020 season has driven the participation numbers up for this year’s championship. With a purse north of $90,000, this Section Championship will surly be one for the ages, the only question is whose name will be etched into history? PA R T N E R S :

â&amp;#x20AC;&amp;#x153;First and foremost, we want to ensure that we are running a responsible championship this year in regards to COVID-19 protocols, but also we want the event to have the feel of a Major Championship for the Section,â&amp;#x20AC;? SCPGA Director of Competitions, Max DeSpain

Fresh off playing in his first PGA Championship at Harding Park in August, the defending Senior and Section Champion, Jeff Hart, PGA, is ready to defend his titles. During the 2019 Section Championship, Hart and Smock were deadlocked after 54-holes at 18-under par, 196, requiring a sudden-death playoff for Hart to claim the Championship title. “After winning the Southern California Senior PGA Professional Championship, to double up here is just phenomenal,” commented Jeff Hart after hoisting the trophy in 2019.

54-hole stroke play Championship; Cut to the low 60 and ties after 36 holes.

The overall champion will earn a berth into the PGA TOUR’s American Express, to be played January 20-24, 2021 at PGA WEST in La Quinta. Top 11 finishers will qualify for the 2021 PGA Professional Championship to be hosted next Spring at the PGA Golf Club in Port St. Lucie, Florida, There will be 5 alternates.

2021 PGA CHAMPIONSHIP Top 20 finishers from the 2021 PGA Professional Championship will earn a berth into the PGA Championship on the Ocean Course at Kiawah Island Golf Resort, May 17-21, 2021.

Coming into the final round threeshots off the lead, Wise turned on the afterburners during the 2019 Women’s Section Championship, making the turn with back-to-back birdies on #12 and #13. Wise wasn’t alone down the stretch, with a pack of players making the push for the title. A three-way tie for second place saw Jacqueline Riegle of Monarch Beach Golf Links, Erika Ilagan of SeaCliff CC, and Dr. Alison Curdt of Wood Ranch Golf Club all finishing a single stroke off the lead at seven-over par, 147. This title marks Wise’s third Women’s Section Championship victory in the events’ 13 year history, having won in 2011 and 2016. “I’m very happy, excited and surprised. I just tried to stay in the present today and hit good shots. My goal is always to finish on top and at the same time I was just trying to have fun. It shows that if you focus on yourself and let loose it helps out a little.”

36-hole stroke play Championship The Women’s Section Championship will offer two flights: Championship and Senior (50+). Players MUST identify which flight they would like to compete in at registration. To be crowned overall Champion, the player must participate in the Championship Flight. Purse will be weighted on number of contestants in each flight.

The Official Publication of the Southern California PGA. #WeAreSoCalPGA 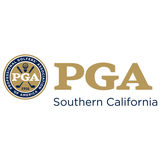