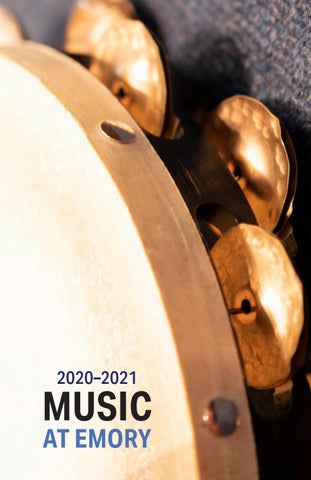 Photographs and Recordings Digital capture or recording of this concert is not permitted. Event and Program Information Available online at schwartz.emory.edu. Cover Photo By Mark Teague. Acknowledgment Eternal thanks to Donna and Marvin Schwartz for their many contributions.

About the Instruments Emerson Concert Hall is home to three performance Steinways, including a New York Steinway Model D Concert Grand acquired in 2019 and made possible through a generous donation from Donna and Marvin Schwartz. The petite John Morley Clavichord belongs to Timothy Albrecht and was brought from his home to the Schwartz Center stage just for today’s concert. The Graves Memorial Portative Organ was made possible through the generosity of Edith Graves and other family and friends in memory of Sarah Graves 09C and Allen Graves and in honor of Don Saliers. We gratefully acknowledge this generous contribution. The Kingston Harpsichord belongs to Don E. Saliers, theologian in residence and retired William R. Cannon Distinguished Professor of Theology and Worship. For many years he directed the Master of Sacred Music program at Emory, and was an organist and choirmaster at Cannon Chapel for 35 years. The harpischord has been on loan for the past decade. Emerson Concert Hall houses the 14-ton Werner Wortsman Memorial Organ built by top North American builder Daniel Jaeckel and installed in 2005. The organ is named in honor of Werner Wortsman 47C. Wortsman was raised in Germany with a love for classical music and opera, and at age thirteen came to the United States to escape Nazi rule. He served in United States Army intelligence in World War II before majoring in journalism at Emory. Living most of his adult life near campus, Wortsman (1925–2009) owned a radio station, wrote two books, and participated in Emory alumni events. The value he placed on education, music, and the arts inspired his bequest to the Schwartz Center for Performing Arts at Emory. The organ, which serves as the visual focal point in the Schwartz Center’s Emerson Concert Hall, was named for him in 2011, in recognition of his generous gift to the Arts at Emory. 5

Program Notes Timothy Albrecht’s Bach Live-Stream! performance today features the first half of the Well-Tempered Clavier, the very first collection (1722) with a major and minor piece written on each successive note of the chromatic scale. But, what does that mean and what does it really matter? Why would a performer not offer a Sunday afternoon program with more variety, instead of insisting on the mind-numbing uniformity of a continuous string of preludes and fugues? The following may both partially answer these questions and also enhance the listening experience: Bach’s Well-Tempered Clavier (WTC) is actually quite diverse, as each entry contrasts with its neighbors in key, structure, content, and mood. Although it is true that every fugue begins the same, i.e., with a solo melody then imitated in higher or lower voices, each WTC fugue has its own unique character—some are more lyric, others dance-like, and so on. Since Bach’s WTC does not designate a specific keyboard instrument, today’s recital offers different keyboards/Clavier, each tuned in a different way (“well-tempered”). Because most know the modern piano best, we begin there, then move on to other keyboards beloved in Bach’s own time. If these earlier points do not convince wary listeners, one may choose a differing approach: Simply imagine each piece as individual Bach offspring, each introducing themself to you, the listener. After all, Bach had 20 children, and imagined this way, today’s gaggle of 12 pieces is more than half of his brood! Each “child” steps forward “The Well-Tempered Clavier presenting an individual is the highest and best personality. One shows a school; no one will ever nerdy, high IQ. Another tries create a more ideal one.” (like any middle child) to fit in and please. One may – Frédéric Chopin appear a deep thinker, while the next shows great dance skills; another enters telling a story, while a “sibling’s” hyper-sensitivity suggests a need for therapy. Thinking of each short prelude or fugue this way should both delight the recital listener as well as make proud the family progenitor, Johann Sebastian Bach! 6

Timothy Albrecht The American Organist hails Timothy Albrecht, Atlanta’s Emory University organist, for his “creative, fertile imagination . . . electric performances . . . Lisztian virtuosity.” His recitals span Alaska to the Andes, and Texas to Taiwan. The Frankfurter Allgemeine Zeitung cites his “ever-present artistry and virtuosity.” “Unforgettable, because inimitable,” writes the Darmstädter Beiträge zur neuen Musik. Nobel Peace Prize–winner Desmond Tutu once wrote him about an upcoming performance, “I am so looking forward to that . . . knowing you will play as if your life depended on it!” He has performed organ music of Olivier Messiaen before the Dalai Lama. Ambidextrous and possessing perfect pitch, Albrecht first studied piano with Eastern European musician Eugenia Prekosh. Elected to Phi Beta Kappa while at Oberlin College, he earned a doctorate at the Eastman School of Music, representing the United States at the Sixth International Bach Competition in Leipzig. England’s Cambridge University, where he has spent two sabbatical research leaves, has conferred him with Life Membership. At Emory, Albrecht headed the graduate organ degree programs for a quarter of a century. He teaches master classes across the country for many chapters of the American Guild of Organists and he has performed and taught in Europe and Asia. He has also taught a master class at the Juilliard School in New York. His discography includes nine solo compact discs, and he has also composed 12 volumes of published Grace Notes for Organ.