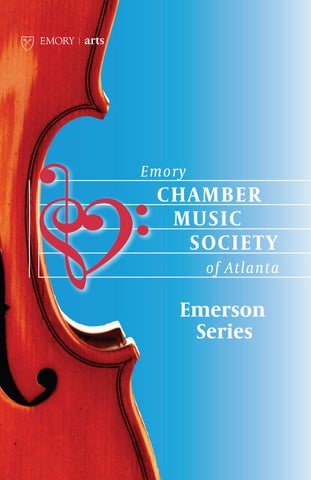 The Vega String Quartet, quartet-in-residence at Emory, is cultivating a new generation of chamber music lovers through dynamic performances and innovative community engagement. The New York Times raved about its “playing that had a kind of clean intoxication to it, pulling the listener along. . . . the musicians took real risks in their music making,” and the Los Angeles Times praised its “triumphant L.A. debut.” The quartet concertizes both nationally and internationally, most recently in Baltimore, Chicago, Nashville, Sacramento, Berlin, San Miguel, and the Brahms-Saal in Vienna’s Musikverein. Performing projects at Emory have included the complete cycle of Beethoven quartets, as well as pairing Bach’s complete works for solo violin, viola, and cello with the six Bartók quartets. It has also developed a series of Jazz Meets Classics programs, bringing the two genres together. Tour highlights include a debut at Amsterdam’s famed Concertgebouw; a tour of Denmark, with a performance at the Royal Danish Conservatory; and appearances at El Paso Pro Musica and the Sitka Music Festival. 5

A unique aspect of the quartet’s residency at Emory is bringing performance into the classroom, collaborating with academic professors to create interdisciplinary parallels and conversations. The quartet also strives to enrich the cultural life of its community, having founded the Emory Youth Chamber Music Program, which gives intensive training sessions in small ensemble playing to advanced pre-college students. The quartet was appointed to the roster of the Woodruff Arts Center’s Young Audience program, engaging thousands of students throughout the greater-Atlanta school system. The quartet has also held residencies in Augusta, Jacksonville, and Juneau that combined traditional concerts with The Vega star is educational outreach, performances in non-traditional venues, and master the brightest in the classes for area students. Lyra constellation. The Vega String Quartet has won According to numerous international awards, Greek mythology, including at the Bordeaux String Quartet Competition, as well as top this constellation prizes from the Coleman Chamber represents the lyre, Ensemble Competition, the Carmel which belonged Chamber Music Competition, and the National Society of Arts and to the legendary Letters String Quartet Competition. musician Orpheus. It tours throughout Asia, Europe, and North America, and has appeared at Weill Hall and Zankel Hall at Carnegie Hall, Bargemusic, and Duke Hall at the Royal Academy of Music in London. The members of the Vega String Quartet collaborate with some of the world’s finest musicians including Eliot Fisk, Christopher O’Riley, William Preucil, Richard Stoltzman, Robert Spano, Charles Wadsworth, and the Eroica Trio. They also commission, premier, and record works by leading composers. The quartet is a frequent guest at numerous music festivals including Amelia Island, Aspen, Brevard, Highlands-Cashiers, Juneau Jazz and Classics, Kingston, Mostly Mozart, Rockport, San Miguel de Allende, and SummerFest La Jolla.

What does Vega mean?

David Coucheron joined the Atlanta Symphony Orchestra as concertmaster in September 2010. At the time, he was the youngest concertmaster among any major United States orchestra. Throughout his career, Coucheron has worked with conductors Robert Spano, Michael Tilson Thomas, Simon Rattle, Mstislav Rostropovich, and Charles Dutoit, among others. He has performed as soloist with the BBC Symphony, Bergen Philharmonic, Sendai Symphony, Oslo Philharmonic, and the Trondheim Symphony Orchestra. Coucheron has given solo recitals at Carnegie Hall, Wigmore Hall, the Kennedy Center, and the XIX Olympic Winter Games (Salt Lake City), as well as in Beograd, Chile, China, Hong Kong, Japan, Serbia, Singapore, and Shanghai. His chamber music performances have included appearances at Suntory Hall as well as Wigmore Hall and Alice Tully Hall. Coucheron serves as the artistic director for the Kon Tiki Chamber Music Festival in his hometown of Oslo, Norway. He is also on the artist-faculty for the Aspen Music Festival and Brevard Music Festival. An active recording artist, recordings with sister and pianist Julie Coucheron include David and Julie (Naxos/Mudi) and Debut (Naxos). He is also the featured soloist on the Atlanta Symphony’s recording of Vaughan Williams’s The Lark Ascending, which was released on ASO Media. Coucheron began playing the violin at age three. He has a bachelor’s degree in music from the Curtis Institute of Music, a master’s degree in music from the Juilliard School, and a master’s degree in musical performance from the Guildhall School of Music and Drama in London, studying with teachers including Igor Ozim, Aaron Rosand, Lewis Kaplan, and David Takeno. Coucheron plays a 1725 Stradivarius, on kind loan from the Anders Sveaas Charitable Trust.

Paul Murphy is the associate principal viola with the Atlanta Symphony Orchestra, having held that position since 1986. Previously he held principal positions with the Minnesota Orchestra, the Kansas City Philharmonic, an the Caracas (Venezuela) Philharmonic, and he was a regular player with the St. Louis Symphony. He has also performed as guest principal for the Boston Symphony Orchestra. Murphy is a native of Pensacola, Florida, where he studied with the renowned Anna Tringas. He later graduated from the Cleveland Institute of Music where his principal teachers were David Cerone and Robert Vernon. During college, he also served as an assistant teacher at the prestigious Meadowmount School of Music. Murphy is an avid chamber music performer and has played extensively with the ECMSA, the Atlanta Chamber Players, the Georgian Chamber Players, and the Minneapolis Artists Ensemble. He has collaborated with such artists as Yo-Yo Ma, Sadao Harada, Robert McDuffie, Alan Gilbert, and Robert Spano. He can be heard in chamber music performances on the Innova, GM, Arundax, and ACA labels, and is a featured performer on the short children’s film, The Orchestra Gets Dressed. Murphy has participated regularly in music festivals including the Grand Teton Music Festival, the Wintergreen Music Festival, the Highlands Music Festival, and the Pensacola Chamber Music Festival. On a different note, Murphy has recorded extensively with rock bands R.E.M. and Collective Soul and also worked with Stone Temple Pilots, Indigo Girls, Usher, Widespread Panic, and Outkast. He has soloed with the Atlanta Symphony in works by Mozart, Rorem, Bruch, and Freddy Mercury. A dedicated teacher, Murphy has served as an artist affiliate at Emory, a distinguished artist at the McDuffie Center for Strings at Mercer University, and he also maintains a private studio. 8

Pianist, artistic director, master teacher, editor, and judge for international competitions, William Ransom appears around the world as a soloist with orchestras, a recitalist, and a chamber musician. His performances have been broadcast on National Public Radio and on television in the United States, Argentina, Poland, and Japan. He regularly collaborates with musicians including Yo-Yo Ma, Richard Stoltzman, William Preucil, Stephen Isserlis, and Robert McDuffie; members of the Emerson, Tokyo, Cleveland, Juilliard, American, St. Petersburg, Borromeo, Parker, Ariel, and Lark string quartets; the Empire Brass Quintet; the Eroica Trio; and the percussion group Nexus; among others. As a master teacher, he also performs and gives master classes at numerous schools of music and universities around the world. He has recorded for ACA Digital and Rising Star Records. Ransom is the Mary Emerson Professor of Piano at Emory University in Atlanta where he is founder and artistic director of the Emory Chamber Music Society of Atlanta. A graduate of the Juilliard School and the University of Michigan, Ransom spends summers as artistic director of the Highlands-Cashiers Chamber Music Festival in North Carolina and for a decade was an artistfaculty member at the Kamisaibara Pianists Camp in Japan. In 2016 he was named artistic director of the Juneau Jazz and Classics Festival and also one of Musical America Worldwide’s “30 Musical Innovators.”

Now celebrating its 28th season of excellence, the Southeast’s largest and most active chamber music organization brings together some of the city’s finest resident musicians with internationally known guest artists who are dedicated to performing the most delightful, exciting, and interesting music from the chamber repertoire in some of the most acoustically and visually beautiful spaces in Atlanta. Guests have included Yo-Yo Ma, Richard Stoltzman, Alan Gilbert, Dave Brubeck, William Preucil, Eliot Fisk, Robert Spano, and many others. The mission of the Emory Chamber Music Society of Atlanta (ECMSA) is to create new generations of passionate and educated music lovers who will cherish and support this great art forever. In addition to presenting an Emerson Series, a Family Series, and the Cooke Noontime Concert Series at Emory, the ECMSA tours, participates in recording projects, commissions new works, and supports numerous community outreach activities. Education is an integral part of the ECMSA’s mission, and members teach in a wide variety of ways throughout the university and greater community, coach student chamber music ensembles, and give private lessons. Emory’s String Quartet in Residence program, held by the internationally acclaimed Vega String Quartet, lies at the heart of the ECMSA’s mission to spread this great music throughout the Atlanta community, reaching audiences of all ages. The Vega String Quartet is the first professional string quartet to ever make Atlanta its home base, and as such, it is transforming music education and performance throughout the area. Until further notice, all ECMSA concerts will be presented online only. Concerts remain free of charge, but donations are greatly appreciated. William Ransom, artistic director wransom@emory.edu/404.727.6443 10

More events coming soon to the Schwartz Center Virtual Stage schwartz.emory.edu/virtual-stage Emory Wind Ensemble (EWE) Sunday, February 28 at 4 and 5:15 p.m. This semester the EWE has formed two chamber ensembles: the Chamber Winds (a harmoniemusik-inspired dectet plus string bass), which will perform at 4 p.m., and a Brass Choir that will take the stage at 5:15 p.m. This first concert of the year will feature select movements from Arthur Bird’s Serenade, op. 40, and Eric Ewazen’s Fanfarria Castellana.

Gabriela Montero, piano Candler Concert Series Friday, March 5 at 8 p.m. Venezuelan pianist Gabriela Montero’s visionary interpretations and unique improvisational gifts have won her a devoted following around the world. Montero is a virtuoso in a class of her own: a pianist whose flair for improvisation puts creativity back at the heart of classical performance.