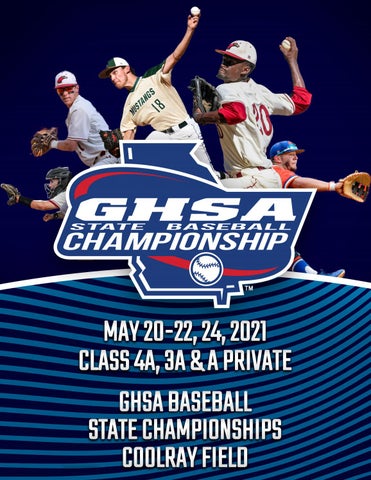 WORD FROM THE EXECUTIVE DIRECTOR

GREETINGS, GHSA BASEBALL FANS elcome to the 2021 GHSA BaseW ball championships! The games are sure to be exciting as all of the

schools represented are looking forward to their team achieving the title of “Champion”. However we all know that all of our teams are outstanding and are definitely winners. This has been an outstanding season and this year’s championship games will include familiar faces as well as teams that have worked hard and peaked at just the right time. Our congratulations are in order for all of the teams, coaches, administrators, students and parents who have supported the athletes through this year’s journey to the final games. I know you will enjoy and appreciate the games and all of the work leading up to this exciting event. I would also like to thank you for your support of high school baseball throughout the season. Your attendance and support is integral to the success of high school athletics and for the team you are here to cheer on. Good sportsmanship is expected from our athletes and I urge you to be positive in your support of all of our teams. Let’s work together to make today’s games a great experience for all involved.

To put on an event of this magnitude takes many volunteers who have worked tirelessly to provide a “first class” event. Many hours of work from this group will enhance the experience of our players, students and fans. The GHSA staff has been working for weeks as well to ensure a special event for all involved. Finally I would like to thank our corporate sponsors who make it possible to put on these championships. Their advertisements can be seen throughout this venue and I encourage you to support them whenever possible. The GHSA wants to thank these exemplary companies for their involvement, we appreciate their support. Thank you for your attendance and I know you are going to enjoy the best high school baseball anywhere! Sincerely,

1A Private - Wesleyan vs Mt. Paran (If Game)

4A - Benedictine vs Marist (If Game)

3A - Franklin County vs North Hall (If Game)

Regions is proud to support the GHSA Soccer Championships and GPB.

POWERHOUSES ASCEND ON COOLRAY FOR CHAMPIONSHIP SERIES BY BRETT GREENBERG

he 2021 GHSA baseball state game while outscoring opponents 87-16 in reached the playoffs in the 2018-19 season, championships for Class 4A, 3A four series wins. The Cadets swept each however, North Hall has reached the final and A-Private feature two power- of the four rounds in two games and run- four 19 times in school history.

house programs in Marist and Wesleyan, ruled their opponent in six of eight playoff

as well as two high schools looking for games. Looking to spoil the Cadets run will their first

ever finals victory. All three be the Marist Eagles who are 31-9 on the

games will be held at Coolray Field, home season and are outscoring opponents 62-11 of the Atlanta Braves Triple-A affiliate the in four rounds of playoffs. Marist reached Gwinnett Stripers. The Class 4A series will the second round in the 2018-19 playoffs kick things off starting Thursday, May 20 while Benedictine fell in the second round with the Class A-Private finals beginning of the 3A playoffs two years ago. Friday, May 21. The competition at Coolray Field will end with the Class 3A finals on Saturday, May 22.

The Class A-Private finals features the Wesleyan Wolves and the Mount Paran Christian Eagles, both of whom have only four losses on the season and went undefeated in their respective regions. The Wesleyan Wolves have won 25 straight games after losing three straight in the first week of March. Wesleyan has not been challenged seemingly in the last month in its journey through the playoffs as the Wolves outscored opponents 7027 in four rounds. This Wesleyan team

matchup between two high schools to or less losses on the year. Franklin Coun- features top-five ranked outfielder for the have won a state championship with the ty has outscored opponents 55-14 in four class of 2022 and Vanderbilt commit Druw Benedictine Cadets, a three-time champi- playoff rounds and looks to improve their Jones, who carries the all-time batting avon, most recently in 2018, and the Marist 16-game win streak to 18 games in pursuit erage record in school history (.471) and

War Eagles who have won 13 state cham- of the school’s first ever state champion- is son of Atlanta Braves legend Andruw pionships and are looking for their fifth in ship. The North Hall Trojans completed Jones. Looking to put a stop to the streak Class 4A. Both teams went undefeated in region play 17-1 with the lone loss com- will be Mount Paran who has swept their their respective regions and were given ing from White County on March 22. The opponents in all but one round (Elite 8, the one seed on either side of the bracket. Trojans have outscored opponents 58-21 Tattnall Square Academy). Both teams The Benedictine Cadets carry a 33-4 re- in the hunt for the school’s second state were eliminated by eventual runner-up cord and 16-game win streak into the title championship since 2017. Neither school Savannah Christian in the 2019 playoffs.

CHANGE STARTS ON THE INSIDE Meet the All-New 2021 A2000 Lineup, Now with Spin Control Technology. WILSON.COM © 2020 Wilson Sporting Goods Co.

Official Energy Provider of GHSA since 1999

CHAMPIONS CHOOSE JOSTENS TO CRAFT THEIR RING AND SHOWCASE THEIR STORY

he Atlanta Braves’ commitment steps of one of Major League Baseball’s historic events over the last few years. and ongoing partnership with the most successful franchises. Kennesaw State and Jacksonville State faGHSA is bringing three state chammously played the first-ever football game HOME SWEET HOME pionship series to Truist Park this week— at the venue in 2018 and the Owls scored the latest joint initiative aimed to promote

Located in Cobb County, Truist Park a 60-52 victory in a five-overtime thriller.

the growth of youth baseball in the state. has quickly become a beloved home field Additionally, Truist Park has hosted top This partnership goes back decades and to the Atlanta Braves since its opening in music acts like Billy Joel, Metallica, Def the Braves willingly opened the doors of 2017. The ballpark features an intimate Leppard, Journey and the Zac Brown Band. their new stadium to Georgia High School configuration—despite its 41,084-seat cabaseball in 2019. That year saw Parkview pacity—and has the highest percentage of

sweep Hillgrove for the Class 7A champi- seats closer to the field than any other ball Keeping this partnership going is a onship in what was the only series played park in Major League Baseball. Woody Stu- win-win for Georgia High School baseat the stadium. denmund of “The Hardball Times” called ball and the Atlanta Braves are mainthe park a “gem” and praised the “com- taining a cherished tradition of the Last year’s cancellation prevented pact beauty of the stadium and its exciting state’s professional teams partnering the opportunity from taking place, but the approach to combining baseball, business with high school sports. The AtlanBraves are rolling out the red carpet in a big and social activities.”

classifications (Class 5A, 6A and 7A) for

This year’s championship games are for years at the Georgia Dome, but

the second annual GHSA championships conveniently scheduled as the Braves hit have not been able to host the games at Truist Park. Additionally, the Braves are the road for series against the Boston Red at Mercedes-Benz Stadium the last few opening up the Red Deck for free parking Sox and New York Mets and they will be years due to logistical concerns. Deup to three hours and tickets will be just back at Truist Park on Sunday to close out spite this, Mercedes-Benz Stadium is $15.

a busy May schedule.

welcoming back the Corky Kell Classic this upcoming football season for

Partnering with the Braves is giving

these six finalists an opportunity to play in used development known as “The Battery” professional franchises are continuing one of the premier baseball venues in the that provides a back drop to the state-of- to shine a spotlight on Georgia high world and they will be walking in the foot- the-art stadium has been the site of many school athletics.

HIGH-LEVEL PERFORMANCE. PERIOD. That’s why we are challenging you to test the performance of your team’s bats vs. Mizuno’s new B19 bats. We’ve partnered with Rapsodo to provide real-time data – including exit velocity and distance – during your testing; providing you with the chance to see the peak performance of our bats for yourself. Then you choose: logos or longballs? Learn more & schedule your team’s battle at www.mizunousa.com/BattleOfTheBats #BattleOfTheBats 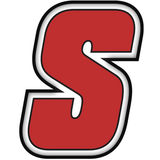