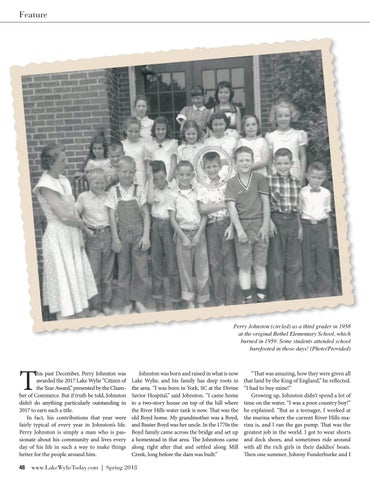 Perry Johnston (circled) as a third grader in 1958 at the original Bethel Elementary School, which burned in 1959. Some students attended school barefooted in those days! (Photo/Provided)

his past December, Perry Johnston was awarded the 2017 Lake Wylie “Citizen of the Year Award,” presented by the Chamber of Commerce. But if truth be told, Johnston didn’t do anything particularly outstanding in 2017 to earn such a title. In fact, his contributions that year were fairly typical of every year in Johnston’s life. Perry Johnston is simply a man who is passionate about his community and lives every day of his life in such a way to make things better for the people around him.

Johnston was born and raised in what is now Lake Wylie, and his family has deep roots in the area. “I was born in York, SC at the Divine Savior Hospital,” said Johnston. “I came home to a two-story house on top of the hill where the River Hills water tank is now. That was the old Boyd home. My grandmother was a Boyd, and Buster Boyd was her uncle. In the 1770s the Boyd family came across the bridge and set up a homestead in that area. The Johnstons came along right after that and settled along Mill Creek, long before the dam was built.”

“That was amazing, how they were given all that land by the King of England,” he reflected. “I had to buy mine!” Growing up, Johnston didn’t spend a lot of time on the water. “I was a poor country boy!” he explained. “But as a teenager, I worked at the marina where the current River Hills marina is, and I ran the gas pump. That was the greatest job in the world. I got to wear shorts and deck shoes, and sometimes ride around with all the rich girls in their daddies’ boats. Then one summer, Johnny Funderburke and I 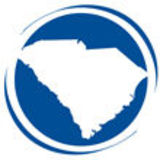