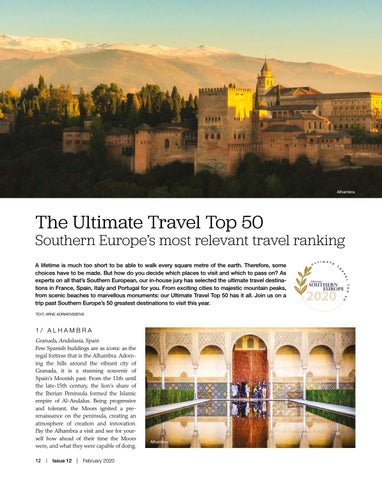 Granada, Andalusia, Spain Few Spanish buildings are as iconic as the regal fortress that is the Alhambra. Adorning the hills around the vibrant city of Granada, it is a stunning souvenir of Spain’s Moorish past. From the 11th until the late-15th century, the lion’s share of the Iberian Peninsula formed the Islamic empire of Al-Andalus. Being progressive and tolerant, the Moors ignited a prerenaissance on the peninsula, creating an atmosphere of creation and innovation. Pay the Alhambra a visit and see for yourself how ahead of their time the Moors were, and what they were capable of doing.

A lifetime is much too short to be able to walk every square metre of the earth. Therefore, some choices have to be made. But how do you decide which places to visit and which to pass on? As experts on all that’s Southern European, our in-house jury has selected the ultimate travel destinations in France, Spain, Italy and Portugal for you. From exciting cities to majestic mountain peaks, from scenic beaches to marvellous monuments: our Ultimate Travel Top 50 has it all. Join us on a trip past Southern Europe’s 50 greatest destinations to visit this year.