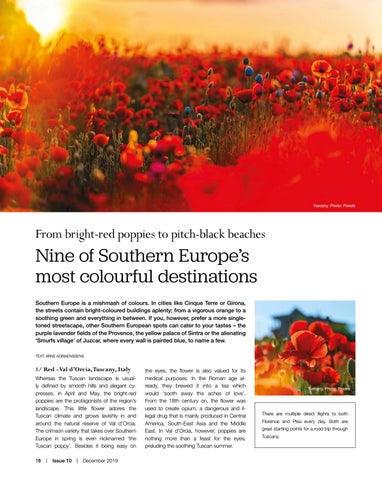 From bright-red poppies to pitch-black beaches

Nine of Southern Europe’s most colourful destinations Southern Europe is a mishmash of colours. In cities like Cinque Terre or Girona, the streets contain bright-coloured buildings aplenty; from a vigorous orange to a soothing green and everything in between. If you, however, prefer a more singletoned streetscape, other Southern European spots can cater to your tastes – the purple lavender fields of the Provence, the yellow palace of Sintra or the alienating ‘Smurfs village’ of Juzcar, where every wall is painted blue, to name a few. TEXT: ARNE ADRIAENSSENS

1/ Red - Val d’Orcia, Tuscany, Italy Whereas the Tuscan landscape is usually defined by smooth hills and elegant cypresses, in April and May, the bright-red poppies are the protagonists of the region’s landscape. This little flower adores the Tuscan climate and grows lavishly in and around the natural reserve of Val d’Orcia. The crimson variety that takes over Southern Europe in spring is even nicknamed ‘the Tuscan poppy’. Besides it being easy on 18  |  Issue 10  |  December 2019

the eyes, the flower is also valued for its medical purposes. In the Roman age already, they brewed it into a tea which would ‘sooth away the aches of love’. From the 18th century on, the flower was used to create opium, a dangerous and illegal drug that is mainly produced in Central America, South-East Asia and the Middle East. In Val d’Orcia, however, poppies are nothing more than a feast for the eyes, preluding the soothing Tuscan summer.

There are multiple direct flights to both Florence and Pisa every day. Both are great starting points for a road trip through Tuscany.

In our last issue of the year, we celebrate the winter cold while on skis and the spring sun while strolling through Las Palmas de Gran Canaria. We also head on a quest to find the region’s most colourful spots, which leads us to some fascinating, bright places. We visit our favourite chateaux, enjoy the mountain views in Grenoble and walk through the corridors of France and Spain’s greatest universities and business schools. Add some Christmas vibes and presents into the mix and you’ve got our jolly December issue.